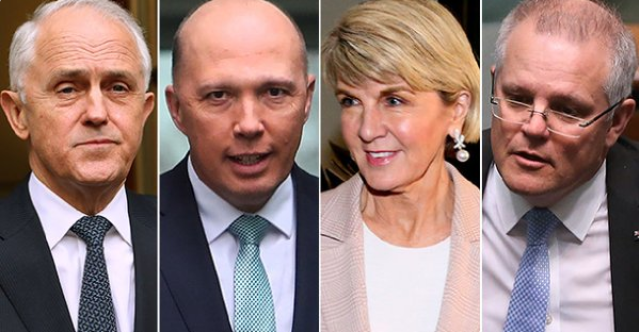 Conventional wisdom now accepts that Scott Morrison came to the prime ministership with Malcolm Turnbull’s ‘blood on his hands’. This is a lazy conclusion and a predictable cliché of the sort that comes easily to harried subeditors, correspondents and political opponents unwilling or unable to look beneath the surface of events.

According to various accounts, when Turnbull called the surprise leadership ballot on Tuesday August 21, 2018, Morrison and his lieutenants organised for five of his supporters to vote for Dutton in the ballot.

Turnbull won by 48 votes to 35, with one abstention. The margin of 13 was insufficient to cement Turnbull’s leadership, given Dutton had not been given time to organise. If only seven MPs had switched their vote on that day, Dutton would have become prime minister.

If the five Morrison supporters had instead voted for Turnbull the result would have been 53 to 30. This margin of 23 would have been of the same order as the 22-vote margin which Bob Hawke won over Paul Keating in the latter’s first challenge in June 1991. Hawke’s winning margin was sufficient to send Keating to the backbench and it would take another six months of agitation by Keating’s supporters before they were able to challenge again.

A similar margin for Turnbull, with an election due in the new year, would have ended Dutton’s challenge. Instead Dutton immediately recommenced campaigning, this time in the open. Three days later, with Turnbull out of the race, Morrison defeated Dutton by 45 votes to 40.

A version of this “parked votes” story has appeared in the spate of post-election books and in Turnbull’s memoir, A Bigger Picture. Turnbull has seized on these accounts to justify his miscalculation in spilling his leadership. Turnbull says he wondered after the ballot

…whether some of Morrison’s supporters had taken the chance and voted for Dutton, hoping they didn’t accidentally deliver him a win. Subsequent accounts of these events indicate that Stuart Robert and Alex Hawke had organised about half-a-dozen of them to vote for Dutton – enough to lift his numbers to a level that damaged me but didn’t get Dutton over the line. If Morrison’s friends had voted the way he said he did, the Dutton insurgency would have been utterly dead that morning.

Turnbull is under no doubt this strategy had Morrison’s blessing.

The idea they did that without his knowledge is fanciful. Scott is a control freak and I’d seen before in the ballots in 2015 how he’d publicly vote one way while ensuring his supporters voted the other way.

This is a reference to the widely held belief that Morrison could have saved Tony Abbott’s leadership, when he was challenged by Turnbull, but chose not to actively direct his supporters even though he cast his own vote for Abbott.

Turnbull is supported in his belief by the man he defeated. Peter Dutton told Niki Savva for her book, Plots and Prayers (Scribe 2019 ), he had “no doubt” some of Morrison’s key supporters did not vote for Turnbull. Dutton names Ben Morton, Stuart Robert, Lucy Wicks and Bert van Manen as among those who voted for him in the first ballot.

The first version of this story appeared in an article by Peter Hartcher in The Sydney Morning Herald on 26 March 2019 headlined: “‘He was in it right up to his neck’: How Morrison deposed a PM”.  Hartcher wrote that Morrison’s numbers men

organised for five Morrison supporters to vote for Dutton in the first spill ballot. It was a ruse – those five were not aiming to install Dutton as leader. They were ‘parked’ temporarily as votes for Dutton in a bid to slam Turnbull. Then, when Turnbull’s position became hopeless, the way would be open for Morrison to enter the contest. The five would then switch support to Morrison. It worked.

Hartcher reported the ruse became known a few days later after it was obvious that Turnbull’s leadership was finished. Turnbull had given his blessing to both Morrison and Julie Bishop to contest the inevitable second leadership ballot. Turnbull’s most loyal supporter, Craig Laundy, met with Morrison’s key supporters to compare numbers and claims to have become aware at the meeting that Turnbull had been played by the Morrison team. Savva writes that Stuart Robert told Laundy, laughingly: “You and I were on different teams on Tuesday”.

If the story is true, this was a brilliantly executed strategy. It enabled Morrison to achieve his ambition without having to confront a version of the memorable question posed by Richard Carleton to Bob Hawke, after he succeeded Bill Hayden as Labor leader: “Can I ask whether you feel a little embarrassed tonight at the blood that’s on your hands?”

Before accepting that Morrison’s supporters were tactical geniuses, and Morrison guilty of treachery, let us look more closely at the outcome of the second ballot which Morrison won 45 votes to 40, after Julie Bishop was eliminated.

We know that two MPs who voted in that ballot did not take part in the first ballot. Morrison certainly gained one of these votes: Arthur Sinodinos, a Turnbull supporter, was on sick leave but had travelled to Canberra after the first ballot. It is reasonable to assume Morrison also gained the vote of the MP who abstained in the first ballot – most likely a person who could not bring himself or herself to vote for either Turnbull or Dutton.

This seems prima facie evidence of Hartcher’s “five parked votes” story, but only if we assume that every one of the 35 MPs who voted for Dutton was a vote for Dutton. Some are likely to have been a vote against Turnbull. Since both Morrison and Dutton draw their core support from the right of the Liberal Party it seems implausible that the reason why five Dutton voters subsequently switched to Morrison is because they had been parked there.

A more plausible explanation is that five MPs were so disillusioned with Turnbull’s leadership, or so concerned about the government’s electoral prospects under Turnbull,  they were prepared to vote for Dutton in the first ballot. Once Morrison replaced Turnbull as Dutton’s opponent, these “anyone but Turnbull” MPs abandoned Dutton for a candidate they found more acceptable. This is the first element of doubt about the “parked votes” story.

The second cause for doubt relates to the timing. Turnbull took everyone by surprise, including his supporters, by calling the first ballot. We have Turnbull’s word that Morrison was certainly surprised. He writes that Morrison texted him in the party room while the ballot was being conducted: “I don’t know why we didn’t discuss this. But that’s your call. Turnbull is on my ballot”. Turnbull says he replied: “Thanks!  It’s the right call. The room has to make up its mind.”

If Morrison was taken by surprise, how could his lieutenants have arranged with supporters to park their votes with Dutton, even in these days of text messaging and WhatsApp inside party rooms? It is most unlikely this could have been organised so quickly.

One possible explanation, believed by Dutton, is that there was a leak to Morrison before the party meeting from the party whips, whose task it was to organise the ballot. There are conflicting reports. On one account, Turnbull advised Nola Marino, the chief whip, in advance; another account is that Marino anticipated the previous day that a ballot was a possibility and alerted the deputy whips of the need to be prepared.

Whichever account is correct, the finger has been pointed at Bert van Manen, a deputy whip who is a supporter of Morrison. This seems unlikely. If van Manen had informed Morrison’s supporters in advance, why was Morrison himself still in the dark?

Niki Savva reports that Stuart Robert told her he had texted Morrison in the party room, after Turnbull had declared the leadership vacant: “That’s the dumbest thing I have seen.” If true, this suggests Robert had no warning of the ballot.

Third, there is a huge risk involved in organising such a strategy. If the organisers sent too many votes Dutton’s way, they risked making Dutton prime minister. If they sent too few, it would have had no effect. How did they, in a matter of minutes, settle on five as being sufficient to destabilise Turnbull without accidentally electing Dutton?

Fourth, several accounts concur that as late as the day before the second ballot Morrison was urging Turnbull to allow Parliament to adjourn for two weeks, believing that time spent back in electorates would calm Liberal MPs on the leadership. Christopher Pyne argues in his recent memoir, The Insider (Hachette 2020), this is surely evidence that Morrison was keen to keep Turnbull’s leadership alive, when just about everyone had declared it finished.

Bearing this in mind the following MPs appeared in the Dutton column in the first ballot but in the Morrison column in the second: Ben Morton, David Fawcett and, possibly, Scott Buchholz and Warren Entsch (who are listed as “uncertain” in the Herald). In addition, we have Laundy’s claim to Savva that Lucy Wicks said she also voted for Dutton in the first ballot, even though the Herald has her voting for Turnbull.

Incidentally these lists also have van Manen voting for Dutton on both occasions. This seems unlikely but if van Manen did vote for Dutton in the first ballot, this undermines the claim that he was the source of the leak about a ballot.

The “parked votes” story seems an unlikely one to explain Turnbull’s demise and Morrison’s ascendancy. Opportunism is a more likely explanation. Morrison’s key supporters most likely took advantage of Turnbull’s demonstration of the fragility of his leadership following his foolish decision to instigate a ballot when there was no pressing need to do so.

Morrison’s key supporters are no doubt flattered to be portrayed as brilliant political strategists but the reputation seems undeserved. Their apparent willingness to claim or accept credit has left Morrison with a reputation for disloyalty to his former leader and friend, which seems unfair.

The most plausible conclusion from this crazy week in 2018 is that Morrison came to the prime ministership with clean hands.

Milton Cockburn is a former editor of The Sydney Morning Herald

The Withering of Malcolm Turnbull

The ABC, Communists and ASIO

Rationality Vanishes in a Viral Fog