At the same time the Andrews government is removing religious instruction from the school curriculum there can be no doubt that it is pushing a radical cultural-left agenda about sexuality and gender on Victoria’s school children.

This shouldn’t surprise, as Premier Andrews is a key member of the ALP’s Socialist-Left faction and Labor’s policy, taken to the 2014 election, states an incoming government must “improve the health and safety of same-sex attracted and gender-questioning (SSAGQ) students by ensuring schools and health services effectively address homophobia, including content of sexuality education”. While all accept that bullying and unfair discrimination are wrong, the reality is that what Premier Andrews supports is more about advocating a radical lesbian, gay, bisexual, transgender, queer and intersex (LGBTQI) lifestyle than actually making schools safer. The Safe Schools Coalition program the Andrew’s government is making compulsory next year, while sold as an anti-bullying iniative, is more about indoctrinating children. 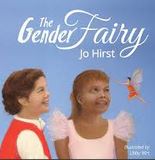 School children are told that gender is fluid and limitless, that they can decide what they want to be.  The Gender Fairy storybook, designed for children as young as four, suggests being transgender is normal and it’s OK not to identify as male or female.

The Safe Schools Do Better booklet tells students that about 16% of children are same-sex attracted, gender-diverse, trans- or intersex, even though a random survey of over 19,000 Australian men and women discovered that 98% identified as heterosexual.

Worse, children are taught that anyone who suggests “normal” relationships involve men and women are to be condemned as “heteronormative”, “homophobic” and/or 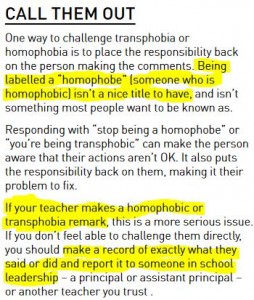 “transphobic”. At right, for instance, is Safe Schools Do Better’s advice on taking offence and reporting teachers perceived to have the “wrong” attitude.  Such are the concerns about the lack of objectivity and the fact that the Safe Schools material is not age appropriate that a recent review commissioned by the Commonwealth government called for significant changes. These included schools needing to get parental approval before teaching the program, which is not to be used in primary schools, and giving parents the right to opt-out.  As expected, in addition to making the Safe Schools program compulsory, Andrews has refused to have a word changed.

More recently, another school program — Building Respectful Relationships — is also causing controversy.  Part of the program asks students to read raunchy and provocative personal ads more suited to pornography sites and then to write their own (below, at left, is part of the teachers’ lesson plan. Notice the fourth bullet point, which suggests that there are “disadvantages” in accepting traditional family relationships as the norm). So much for the innocence of youth.

Parents, always their children’s primary carers, need to realise that what is happening in Victoria is not new, that the cultural Left has been pushing its radical agenda on schools for years. The Australian Education Union is the largest 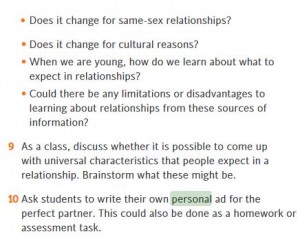 and most powerful teacher union in Australia and its 2001 Policy on Gay, Lesbian, Bisexual and Transgender People argues that “homosexuality and bisexuality need to be normalised” in the school curriculum. The AEU also argues that it is wrong to believe heterosexual sex and relationships are “natural” or “normal”, and it condemns churches as “un-Christian” if they do not agree with the radical LGBTQI agenda.

The AEU’s 2003 policy goes further in demanding that “all staff must be in-serviced in homophobia and heterosexism” and “all curriculum must be written in non-heterosexist language”.  It is no surprise that “discussion of GLBT issues in a class situation should aim to be positive in its approach”.

The Australian Association for the Teaching of English has also been a long-time supporter of a cultural-left view of gender and sexuality.  In 1992 an academic in the English teachers journal described traditional approaches to literature as “bourgeois, patriarchal, ethnocentric” and argued they needed to be deconstructed and exposed. A second academic argued that the English classroom should be used to “elaborate alternative versions and styles of masculinity in attempting to move beyond an oppressive gender bind”.

The belief is that traditional fairy tales like Cinderella and Snow White unfairly enforce a heterosexist view because the happy ending involves the heroine marrying the prince. Shakespeare’s Romeo and Juliet and Jane Austen’s Emma are also unsuitable, as they enforce “an oppressive binary structure for organising the social and cultural practices of adolescent boys and girls.”

The Victorian curriculum is not alone in making schools enforce a radical view of sexuality and gender.  The 2001, South Australia’s curriculum, under the heading Gender Equity, argued that gender is a “social construct” and  heterosexuality enforces unfair dominant power relations that must be deconstructed.

Parents might wonder why, at the same time the Andrews government wants to force its radical gender agenda on schools, it has banished religious instruction from the formal school curriculum. It’s clear where the government’s priorities lie.  Instead of a strong moral compass, the focus is on advocating a radical LGBTQI secular agenda.