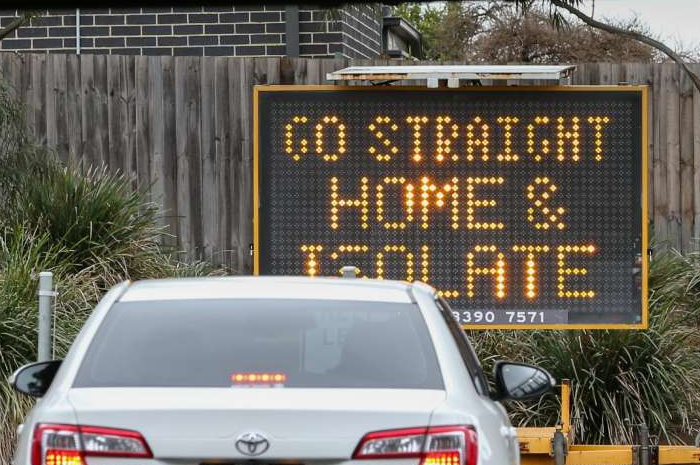 As COVID-19 continues to cut its path through the population, afflicting most who contract the virus with an unremarkable head cold, the cost a pigheaded lockdown brigade is imposing on Australia can only deepen and its consequences become increasingly protracted. The impact of the recently implemented Melbourne lockdown will impose a cost estimated at between $6 billion and $10 billion, figures that do not take into account the full collateral damage — the closed shops, wilting restaurants and jobless legions, to mention but a few. Instituted by privileged bureaucrats and enforced by the edicts of politicians who find it expedient to ignore what they must surely recognise as the immense long-term damage of such policies, they are crippling the prospects of millions of their fellow citizens.

What makes it even more galling is that, at the end of the day, none of it will be seen to have had even a minimal impact on the long-term trajectory of the virus, except to prolong the pain and increase the damage to the economy.

These measures are championed by the the ABC, where the collective intellect embraces fervent belief in the catastrophist contention that the climate can be regulated for evermore by managing the miniscule atmospheric input of human-induced CO2. This is the calibre of wisdom — or rather, the complete lack thereof — that prevails. Worth noting, too, is that the likes of Victoria’s chief medical officer, Brett Sutton, were preaching climate doom before switching seamless to warning of viral catastrophe.

It is indeed ironic that one of the most candid announcements by a national leader in relation to COVID-19 emerged from Iran over the weekend. President Hassan Rouhani claimed studies of antibody seroprevalence conducted throughout his country had established that approximately 25 million Iranians have been exposed to the Wuhan Flu, rather than the official statistics of a paltry 270,000. This represents the ten-fold increase in true virus exposure that has been de 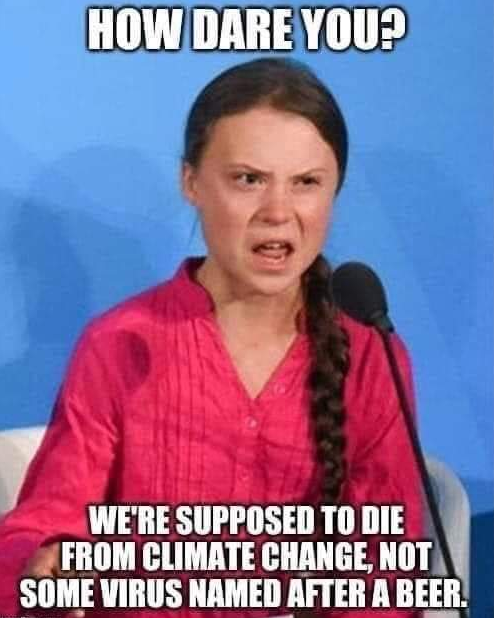 monstrated time and again, from Iceland to Spain to Germany, the UK and US, by antibody seroprevalence studies consistently returning results that are, at a minimum, ten times the published caseloads. The pronouncement and acknowledgement by Rouhani, the first national leader that I am aware of to do so, recognises that the caseload globally is likely in the order of 130 million to 200 million and growing exponentially.

Recent COVID-19 antibody studies by the US Centre for Disease Control & Prevention (USCDC), drawn from geographically separated localities all over continental US,  returned exposure rates between ten and eighteen times greater than official case statistics. I use the term ‘exposure’ as many infections are either asymptomatic or so mild as to barely register. Yet despite this degree of prevalence throughout the globe, the pandemic panic merchants in public health bureaucracies, the politicians who heed them because that is safer than taking responsibility themselves, and much of an easily led mainstream media, with few exceptions, have consistently misled the wider community by failing to acknowledge and account for this much greater increase in exposure. Were they do so, lockdown’s true believers might then have to admit that this is predominantly, by a vast margin, a mild upper respiratory tract infection with overall mortality rates equivalent to a virulent influenza strain, but nowhere near as deadly as the Spanish Flu of a century ago, which claimed the lives of some 15,000 Australians. With proper accounting for all-case exposures, mortality statistics for COVID-19 are in the ballpark of 0.1 per cent – 0.3 per cent of cases.

Australian authorities have steadfastly steered clear of undertaking and publishing widespread antibody seroprevalence studies in the broader community. And while it is true that there is likely a far lower exposure rate here, due to the initial international border closure limiting the influx from the rest of the world and, hence, the incidence of COVID-19, the emerging situation in Victoria demonstrates that once the China Virus gets in, it is very hard to get it out.

In spite of the irrefutable evidence that COVID-19 has resisted all attempts at containment on a global level, a small number of countries, mostly islands, managed to prevent widespread establishment in the early months of the pandemic. New Zealand, for example, swears it is now as free of COVID-19 as it is of snakes. The question is: what next? Unless Prime Minister Jacinda Ardern intends to follow the example of Japan’s 17th century Tokugawa shogunate and seal itself off from the world indefinitely, this readily transmitted virus will return with the tourists. As deeply affected nations emerge with increasing degrees of herd immunity, those yet to host the virus are indeed the most vulnerable. 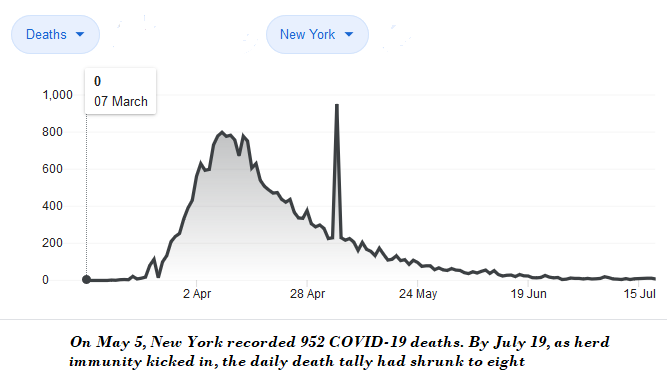 We see this pattern emerging within countries such as the US, where areas such as New York that were heavily impacted initially are now protected from any additional surge in cases while areas that were spared early, such as Florida, are now playing catch-up. The protracted attempt to pursue a strategy which envisages a nation can entirely eradicate and prevent entry of COVID-19 over the long run is nothing better than hopelessly wishful thinking. The consequences of adherence to such a strategy, as favoured by Victoria’s chief medical officer, Professor Sutton, is grim as can be: a perpetual re-entering of lockdowns and onerous restrictions with protracted damage to every other facet of life, especially the economy.

The collateral damage is accruing every day and will ultimately make a lie of the argument that keeping case numbers low corresponds with lesser damage. Indeed, if Australia chooses to remain in the delirium of its lockdown fever as every cluster of presentations arises, then we are in for a very bleak future. Perhaps those who bear the title of chief medical officer should switch the signs on their office doors to ‘Chief Coronavirus Officer’, as they clearly have little regard for all other public health outcomes.

Meanwhile, in what could only be called the single greatest act of elitist hubris in living memory, we have seen and heard Victoria’s premier, Daniel Andrews, berating the little people of his state for their “complacency”, rather than his own monumental bungling, which saw hotels set up to contain the virus become fountainheads of its propagation. Then there was tolerance with which he indulged the 10,000-odd protesters who clogged the CBD to protest the killing half a world away of an oft-convicted armed robber by a thug cop whose extensive record of complaints should have seen him booted from the force years ago. The protesters were, of course, the Left’s constituency, so the Premier cut them a mile of slack. Today, journey too far from home to patronise, say, a favourite butcher and you’re apt to pulled over and hit with a $1600 fine. Such is life and logic these days in Dan Andrews’ kingdom.

But what of the lockdowns’ moral dimension? Again, we are bombarded by public health bureaucrats’ pronouncements and those of their political masters (or is the other way around?) that they are ‘saving lives’. When they proudly choose not to consider ancillary deaths related to COVID-19, they spit in the faces of those facing financial ruin for themselves and their families brings the world crashing down on top of them. Tellingly, as the SMH recently reported, Victorian Health Department data shows emergency room visits by mental health patients, as a proportion of overall emergency room visits, rose by a third in April compared with a year earlier. The ethics of lockdown policies have become very opaque indeed.

To hail the benefits of locking down normal life and commerce requires a complete indifference to the broader and deeper consequences. The next time you hear Daniel Andrews spout the mantra that he will do whatever it takes to ‘save lives’, do not hesitate to translate that as a further indication he will trade one life for another that carries less political risk. This is the political game we have now entered, the one where premiers seek to score political brownie points, as recorded solely on a COVID-19 scoresheet.

Those who remain convinced of the public good in derailing economies and imposing lockdowns in order to hide from this virus might want to consider the WHO’s recent statements that as many as 90 million people will fall below the poverty line, while some 130 million risk outright starvation from COVID-19’s impact. It is also worth bearing in mind that at a recent UK parliamentary enquiry, Professor Neill ‘Pants Down’ Ferguson conceded that approximately 66 per cent of those who have succumbed to the virus in the UK would likely have died within the same calendar year from pre-existing age- and chronic-disease related morbidities. Add to this the emerging recognition in the UK that COVID-19 death statistics have been radically overstated, the co-morbidities ignored, leading the government to suspend daily publication of these statistics until the irregularities are addressed and rectified.

For Australia, the only way forward is, as enunciated by Professor Carl Heneghan, director of Oxford’s Centre for Evidence-Based Medicine, and epidemiologist Tom Jefferson, of the Cochrane Policy Institute,to learn to live with the virus by implementing targeted interventions to protect the aged and most vulnerable.  In the long term, the blunt instrument of continued lockdowns will have protected nobody, the alleged ‘cure’ being far worse than the disease.

Responding to the financial crisis