Nicola Roxon, How Smart You Were 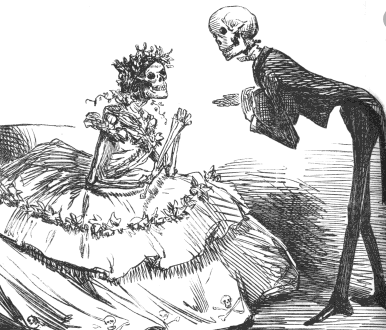 If you want to see what a proportionate response to a pandemic looks like re-visit 2009. That was when the Swine Flu pandemic’s projections posited up to 20,000 deaths in Australia, yet there were no lockdowns. AFL and the rugby codes proceeded unimpeded and no one accused solitary golfers of killing their fellow citizens, as Victoria’s Daniel Andrews told the ABC just days ago. Travel and the economy were similarly unaffected. The exaggerated response to COVID-19 is what you get when policy is placed in the hands of bureaucrats given their head by elected leaders taking their cues from hysterics.

In coming months our politicians and bureaucrats will be busy crafting the history of their response to the COVID-19 pandemic. Considerable emphasis will no doubt be placed on comparing early epidemiological models, based on data from other countries, which suggested tens of thousands were at extreme risk from the virus. Indeed, exactly that spinning is now underway, with Victoria’s chief medical officer, Brett Sutton, claiming on Monday that the measures he has recommended, and which the police have enforced with random stops and $1600 fines, saved 36,000 lives.  Why be so modest, Dr Sutton, why not come up with some fresh modelling and claim credit for 100,000 saved lives?

It is perhaps worth noting here that, until he switched to COVID-19 alarmism, Dr Sutton was a committed propagator of the so-called “climate emergency”, being the lead author of a paper published as late as March 16, which detailed how the Garden State would respond to the “existential threat” of rising temperatures. In another recent paper, Dr Sutton was at pains to stress how

by working together, we can better address the complex challenges that climate change presents, safeguard our prosperity, and ensure Victoria continues to be one of the most sustainable and liveable places in the world.

Read that excerpt with an eye for irony in light of the current anti-COVID measures and you’ll find it hard not to wear a grim smile, not least at the enthusiasm with which Dr Sutton flings himself and his models at every latest “existential threat”. As for “safeguarding our prosperity”, he really should have a chat with some of the newly unemployed. They could have a coffee together — no, wait, the cafes are all shut, and if they repaired to a local park VicPol would swoop with fine books at the ready.

Yes, history will be written by officials keen to justify their policies and the economic disaster that has ensued, the extreme lockdowns and abuse of civil liberties to enforce them. What we can count on is of them making no mention by way of comparison with that Swine Flu of 2009? The Rudd Government was in office at the time and its response — credit where credit is due — should have provided some lessons applicable to our current circumstances.

Swine Flu infected between 700 million and 1400 million people globally (the estimates vary), the higher number representing as much as 21 per cent of the global population. The fatality estimates are similarly broad, with somewhere between 150,000 and 575,000 thought to have been killed. Epidemiological models of the Swine Flu pandemic suggested Australian deaths would be in the order of 20,000. The Rudd Government, surprisingly, ignored the worst of the models while still planning for up to 6000 deaths. There are other differences between then and now. Unlike COVID-19, which harvests the bulk of its lives from the ranks of the elderly, Swine Flu afflicted the young, the median age of those Australians whose lives it claimed being 48.  Infants and young children were among those killed.

By the end of 2009, around 38,000 Australians had been infected and there were 191 dead, a crude death rate of 0.9 per 100,000. The disease had a hospitalisation rate of 13 per cent, with 13 per cent of those admitted needing to be placed in intensive care. Despite the rate of infections and deaths, the Rudd Government did not impose any restrictions on movement or force businesses to close. Restaurants, bars and clubs remained open and profitable. Beaches and parks were not closed. The public was able to barrack at the footy, play sport, go fishing, and wash their cars without the risk of being fined by revenuers in blue. There were no restrictions on interstate or overseas travel. Even with the aftershocks of the Global Financial Crisis unfolding, Australia’s unemployment rate in 2009 remained below 6 per cent. There was no economic or social meltdown. There were no outcries from the media or public for the government to do more, to adopt any measure that might save an additional life, not even with small children and mums-to-be succumbing. 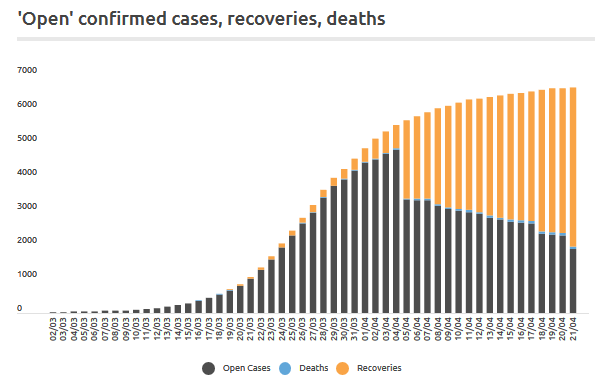 By comparison COVID-19 has thus far officially infected less than 7000 and killed 72 (April 21), according to the latest data.  As of April 16, the median age of the dead was 79. Remarkably, no Australia under 50 has thus far died from the disease. The crude death rate of COVID-19 in Australia stands at just 0.25 per 100,000. In 2009, despite experts predicting up to 20,000 deaths, Kevin Rudd offered little more than basic hygiene advice – wash your hands. By contrast, the economic impact of the measures implemented by state and federal governments to save Australians from COVID-19 is measured in the hundreds of billions of dollars. We could see as much as a 22 per cent drop in GDP. After a month of lockdowns the unemployment rate is already over 10 per cent and is expected to rise to figures last seen during the Great Depression. The contrast in responses and consequences given the similar magnitude of today’s threat and that of 2009 could not be more stark. 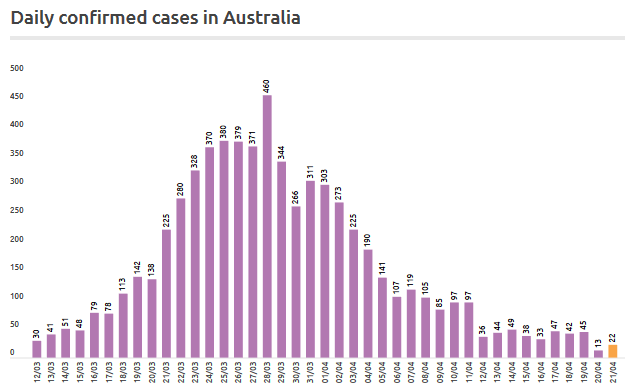 The current government’s modelling that showed a health system overwhelmed with Covid-19 cases if nothing were done was based on deeply flawed inputs that assumed the virus’ local impact would mirror the disastrous tolls in Italy and Spain. Various Quadrant contributors, Peter Smith most notably,  have pointed out that rates of transmission and death in jurisdictions with dense and highly concentrated populations, especially those with large cadres of the elderly, is to compare apples with oranges.

The so-far mild impact of COVID-19 in Australia could have been predicted, or at least anticipated as a likely possibility, based on Australia’s unique geography, demographics, lifestyle and season. The virus arrived at the end of summer, the weather still warm and with the flu season, which typically kills around 3000 Australians per year, still months away. Our generally healthy population resides for the most part in sprawling suburbs of stand-alone homes. Yes, Australians do live in apartments, but even where the density is high it remains slight by comparison with, say, New York, where COVID-19 is taking a much higher toll. We have low rates of smoking. Our frail and elderly largely live isolated from the rest of us in nursing homes, and the next most vulnerable group of independent retirees reside in their own homes, mostly away from family, unlike Italy and Spain. If these factors were taken into account by the modellers, insufficient weight was accorded them.

Models are only as good as the data they are fed — and the number-crunching bureaucrats fed their epidemiological models on junk food. Unfortunately no single politician exercised any critical thinking and the flawed models, adopted as gospel truth, were b roadcast to a worried public. “Flatten the curve” became the law of the land, with no serious questions being raised. In 2009, Rudd’s health minister, Nicola Roxon, ignored expert epidemiological models that predicted 20,000 Swine Flu deaths. Many Quadrant readers will likely think poorly of Rudd & Co., but credit where it is due: when the panic merchants came calling, Ms Roxon sent them on their way with the sheaves of dire predictions they rode in on.

The current pandemic could have been successfully handled with increased public awareness of hygiene, appropriate distancing and protection of the most vulnerable without resorting to the extreme measures that have created the dystopian world in which we are now forced to reside. The number of deaths would likely be a little higher, but not much more than those of 2009.

The response to Swine Flu vs COVID-19 is mystifying. How can the government say its response has been proportionate to the level of risk when the risk-reward assessment was never done? How, in just ten short years, did we discard the pragmatic and rational response to one virus with a declared man-the-battle-stations “health emergency”?  How is that a minister in an incompetent Labor government could see through flawed advice, yet a Coalition government which bills itself as better and sharper managers swallowed hook, line and sinker?

Later, as the “experts” re-write history to the advantage of their conduct when COVID-19 came to town, these are questions it behooves Australians now being fined and confined to keep very much at front of mind.

Andrew Bolt and the Orwellian State

The Life and Times of Ray Evans