The Hazy, Crazy, Daze of Summers

The ego has landed. Anne Summers, “Australian legend”[i] and publisher of the Anne Summers Reports e-magazine, has been running a three-day celebratory conference on Anne Summers, author 40 years ago of Damned Whores and God’s Police.  Keynote Speaker: Anne Summers. Supported by Destroy the Joint and convened at UTS Sydney, tickets were going for $330, plus $35 for cocktails and $130 for dinner.

I feel that three days would have been inadequate for proper homage to Anne (we’re on first-name terms) and in protest, I reluctantly boycotted the great woman’s celebration of a great woman. It was a sacrifice, though, as the list of engrossing sessions included “Viva La Vulva”, “Shaping Our Feminist Future”; “Sex workers, sluts and deviant women”, “Women online: Virtual violence, real harm” and the not-to-be-missed “Feminism Today: From Suffragettes to SlutWalkers and beyond”. If that was not enough fun, I also forsook Eurydice Aroney, film-maker of La  Revolte des Prostitutes, and UTS’s Belinda Middleweek, addressing “Real Sex Films”. 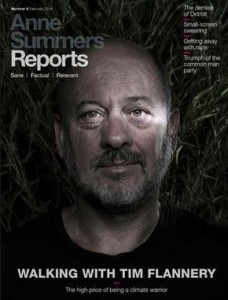 Non-Anne Summers speakers include Bill Shorten’s mother-in-law, Quentin Bryce, and Penny Wong. Then there was ACTU President Ged Kearney, ACTU vice-president Sally McManus, and The Drum TV’s Julia Baird (Anne’s personal partner, Chip Rolley, is The Drum editor). Plus the ABC’s ubiquitous Annabel Crabb,  journalism expert Jenna Price; gay rights activist Dennis Altman; Andrew Bolt’s right-to-offend nemesis Larissa Behrendt (mis-spelled by Summers in her magazine as “Larrisa”)’ who was booked to give “an indigenous woman’s perspective” on whatever. Sex Discrimination Commissioner Elizabeth Broderick was slated to be there, as was Renee Carr, chair of the loopy Australian Youth Climate Coalition; Georgina Dent, associate editor of Mamamia, and Lyndall Ryan, billed as the “key target in the Aboriginal History Wars”, were other marquee names

Non-luvvies (not many) includes ex-Army chief David Morrison and speakers against female genital mutilation – a good cause. However, I was disappointed to see nothing in this feminists’ conference program about Islamic conquerers converting thousands of  Christian  and Yazidi girls and women to sex slaves available for sale and barter (average price, $160). A demo would have gone down well, Anne, if only the pressing need to address the social impact of slutwalking and the like did not take up so much time.

“Dear Tony, I am sending you the latest issue of ASR again because we discovered a few mistakes in the version we sent you last Thursday.  My apologies for this.  Here is a revised – and we hope! – an error free copy.” 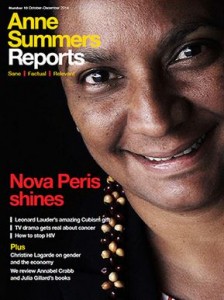 I failed  to discover what errors required the e-pulping of Anne’s entire 90-page e-magazine, Issue 13, Version 1. Someone smarter might succeed; let me know.

To rely, as Anne’s magazine does, on voluntary funding is pretty brave, so it’s no wonder  she is “limping along on an overdraft”.  In the latest 90 pages, there  is only  a one-page ad for Qantas, a small ad for a travel company,  and a page for Ernst & Young, which is a sponsor of the mag. Originally, Anne was rather sniffy about ads:

I am not averse to advertising, the right sort of advertising I certainly would be willing to entertain that, but essentially I am going to be doing what President Obama did in the political sphere, ask a lot of people for a little bit of money.

Running a free magazine is an expensive business. I AM GOING TO BE BLUNT. WE NEED MONEY… Our accountant has calculated that we need $250,000 to cover our expenses for a year. It is not a huge amount of money, but it would make a huge difference to us.

It would pay for six issues, allowing us to continue to pay writers, artists, photographers and the small two-person team of art director [Stephen Clark] and managing editor [Foong Ling Kong], who ensure we publish a magazine of quality. It would also cover our other running costs, things like insurance, accounting, the wages of my part-time assistant, the cost of our website and allow for some marketing and promotion.

We have financed ourselves to date on ticket sales and some corporate sponsorship from our Conversation events, and on donations from you, our readers.

This income has been most welcome but it has not been quite enough to cover our expenses. So we are limping along on an overdraft and need to find additional sources of income to guarantee our future.

We need to invest. I am convinced we can get advertising if we could hire someone to ‘sell’ what we have to offer… Our events could produce more income if we had the resources to reach bigger audiences.

I am grateful beyond measure to the dozens of you [what a mean bunch we 15,500 subscribers are!] who have donated to us over the past two years…

I know not everyone can afford that amount. But I would appreciate whatever you can manage as a sign of your support.

To be totally “crowd-funded” by our own readers would make us very powerful: a totally independent media company.

The economics of publishing an eponymous e-magazine must get confusing at times. On page 88 she says $160 from her 15,500 subscribers will get her off the hook, but on page 85 she says only $100 per head “will ensure we become financially viable for the long  term.” Odd. The magazine names its regular donors, but there are only 17 of them listed, one of them being Shorten in-law Quentin Bryce. The company  Anne Summers Reports Pty Ltd., registered on 20/9/2013,   doesn’t have to file accounts   so I’m none the wiser about how her previous donations were spent. 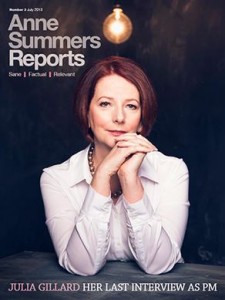 On the cup-rattling page of her website, Summers discloses that each issue costs about $20,000 to produce, excluding rent, equipment and other, unspecified overheads. Writers, artists, photographers “and the tiny (and part-time) editorial team” these days get paid, whereas for the first issues of two years ago their reward was the simple pleasure of burnishing Summer’s glory. She is doing her best to sell ads, she swears, “but we will always need your support…Every donation, however small, helps.  Whichever way you donate, and however much you give, please know how much we appreciate it. Without you, there’d be no us,” she writes. Deeply moved, I donated another $2 through PayPal (additional to my $1 in 2012). Yes, we are us!

She’s had her ups and downs in business and I hope Anne Summers Reports succeeds,  although  Issue #13  is still rhapsodising about ex-PM Julia’s misogyny speech three years ago. (“I will not be lectured about sexism and misogyny by this man”, it  reads on my souvenir tea-towel). Lest we forget, Julia’s speech was in defence of hand-picked Speaker, Peter Slipper, who had made misogynous comparisons of female genitals to shelled mussels.

Anne’s business ‘downs’ were in New York in the late 1980s. I wouldn’t disinter such tribulations except that Anne, my  mentor in the reporting art, thought it quite OK in her profiling of Andrew Bolt to quote his girlfriend from 30 years before, a former belly dancer now in her 50s, who dished the dirt on the future columnist, then but a callow cadet journalist. Dredging even deeper into the Bolt pedigree, Anne uncovered and shared the remarkable scoop that Bolt’s late mother, Margarethe, spent her childhood in Aalsmeer, Holland, “notorious for having had a Nazi mayor during World War 11.”  A great “gotcha” re Bolt’s mum, Anne!

I was appointed North American manager for Fairfax… Sandra [Yates] came over from Sydney to start Sassy magazine [a lookalike of Australia’s “Dolly”]. She was with the magazine division of Fairfax…She discovered that Ms magazine was for sale. And the two of us got together and Sandra said, ‘Well, wouldn’t it be a great adventure if we could get Fairfax to buy Ms. And we could set up the two magazines together and I could be the editor of Ms…’ And that’s what happened. 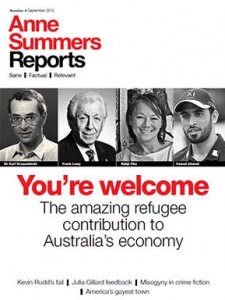 Shortly after, Warwick Fairfax the Younger put up Fairfax’s overseas assets for sale. Yates and Summers in mid-1988 instead organised their own management-leveraged buyout of the magazines to the tune of $US20million — $US14 million purchase price and $US6 million operating capital.   Their entity was named Matilda Publications Inc., which was backed by Citicorp Venture Capital Partners and the State Bank of New South Wales.

Yates says that six weeks after they bought the mags, the religious Right targeted Sassy over its [minor] sex education content, lamenting “in the space of a week we lost our five largest advertisers.” Added Summers: “$25 million worth of advertising in a very short time. And that was the beginning of the end.”

The magazines accumulated losses until August, 1989, despite circulation gains, and the financiers, who had reportedly sunk $US35m into the exercise, pulled the plug. A US buyer then put the magazines under new management. While Summers and Yates  blamed the religious Right for their business’s demise, others also cited Ms Magazine’s ill-advised extension of political coverage, and Ms  Magazine’s ‘declaration of war’ on the Reagan administration over abortion rights.

Anne’s speeches and  regular column for Fairfax’s SMH contain many gems to share.

Personally, I have chosen to identify as Welsh, land of my (distant) fathers.

As an habitue of academia, where she is showered with honorary degrees, she ought to know about  academics lusting to criminally prosecute the “deniers”. For example, Melbourne University’s Professor Peter Christoff caused not a tittle of disquiet in a packed high-level seminar when he called for “substantial fines and perhaps bans on certain broadcasters and individuals whom I will not name, who stray from the dominant science without any defensible cause.” He said such a course  “would have a disciplinary effect on public debate.”

Richard Parncutt, Melbourne University alumnus, now a professor at Graz, took it further and called for unrepentant deniers to be executed.

Mr Kenny has one standard for his own free speech and another for other people’s.  When you prick people like Mr Kenny, they don’t bleed. They burst into tears and run sobbing to their lawyers… His feelings were hurt.  So he sued.

Anne’s sophistry aside, Kenny had never called for the repeal of the long-standing laws of defamation. Nor had he advocated the right to falsely shout “Fire!” in a crowded theatre.

She’s right, technically. Re-publish it at will, the court says, provided you also publish the court’s “corrective notice” prominently and immediately adjacent.

To the contrary, Age cartoonist Ron Tandberg, for one, called Howard a liar so regularly that, at a  public seminar  in 2007, I asked him to name any lie Howard had told. He couldn’t think of one.

I have an Anne Summers 2011 stamp still unused, because  I can’t think of a respectful way to lick it.

Our Lucky Backwater of a Country

You, too, Can Sleep with Daniel Andrews