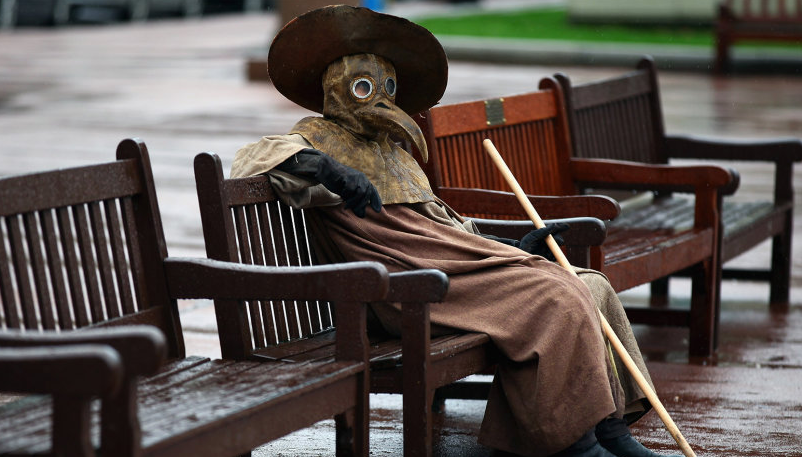 Two idiocies have been messing with my mind since the closing-down hysteria began.

“We’re all in this together.”

No, we are not. Please shut up! I am not with you at all. Not even a little bit. More to the point, those thrown out of work and desperate are not with you in your tenured jobs or sinecures.

Can we apply this permanently to the insufferable left-wing creeps who have infected our media, universities, schools, legal fraternity and public services; and who seem as happy to build useless wind turbines, as they are to jail an innocent cardinal, as they are to shut more and more businesses down and keep families and friends and congregations apart. Personably, I am happy to keep my distance from them into eternity.

Here is another idiocy which I’ve now added to my list: “Restrictions can only be lifted when medical advice indicates to us that it will be safe to do so.”

This specific form of words, of which variations abound, is courtesy of those attributed to Mathias Cormann by the Australian newspaper. Safe, now there is a word to conjure with. Might as well  cocoon ourselves in bubble wrap and wait to die of natural causes; if, indeed, safety is our defining imperative.

But this piece of mine is not about the above; at least not directly about the first two idiocies. It is inspired, if that is right word, by a particular Review of the Imperial College (IC) team’s scary predictions. These predictions came out on March 16 and panicked the UK government and other governments into shutting things down tout de suite. The Review, of only about 800 words, and authored by among others Nassim Nicholas Taleb (Fooled by Randomness), came out of an institute within New York University just a day later.[i]

The Review ended this way: “Where lives are at stake, it is essential for science to adhere to higher standards.” Obviously, the Review has not been influential. I was only alerted to it the other day and, thus, unfortunately perhaps, did not build it into my Quadrant commentary on the IC report, “The Blunt Instrument of Suppression“.

The mistakes made by the IC team, according to Taleb et al, were to ignore the dampening effect on infections of both contact tracing and of a more general identification of those with symptoms. They note that the availability of testing is not brought into the analysis. And they also argue the transmission rate is overstated by failing to account for the observation (from China) that only five percent of those in contact with an infected person become infected.

The important conclusion in the Review is this:

Since lockdown results in exponentially decreasing numbers of cases, a comparatively short amount of time can be sufficient to achieve pathogen extinction, after which relaxing restrictions can be done without resurgence.

Time to get things going again, I think. Trump, Morrison et al take note. Well, that is not my point, though I do believe it.

My point is that in any crisis groupthink can take over, quashing alternative views. That has certainly happened in this case. The views of Taleb et al and perhaps those of others questioning the received wisdom were simply lost in the panic. When only the President of Belarus stands against the tide, you can bet that debate has been killed off with extreme prejudice.

Events have moved on since March 17. For all I know, those authoring the Review might have changed their minds. It doesn’t matter. What matters is that one view and one associated strategy have prevailed since the start of this crisis. And not because they came out of a vigorous public debate about alternatives. No, one government after another has followed the pack at the behest of their senior public health experts; who, no doubt, form a collegiate international grouping, and thus speak with one voice. Can they all be wrong?

The answer to that question is not yes or no. They are right that the only way to contain a highly infectious disease, without a cure or vaccine, is to keep people apart. I know that without studying epidemiology. They knew it in the Middle Ages. It is the bleeding obvious. The tricky bit is to what extent and for how long should people be kept apart. If you are a public health expert, charged with minimising hospitalisations and deaths, the answer is clear. Everybody should be isolated and for as long as it takes to be “safe” from new infections and deaths.

There is a scene in The Godfather that applies to the position of all governments (except Belarus’s) and their current public health advisers. It concerns the Corleone Family’s consigliere, Tom Hagen.

“Michael. Why am I out?” Tom asks. Michael replies: “You’re not a wartime consigliere, Tom. Things may get rough with the move we’re trying.”

It is time for governments to take their current public health advisers out of the firing line. While they remain in the firing line they will not and cannot give balanced advice. The risk of them giving advice that things can be opened up is too great for them personally. They suspect people will go on dying, unless we wait for forever and a day, and that they will be blamed. Who can blame them for being risk averse? They are not paid or elected to suffer public floggings for missteps. Politicians are.

Now is the time for presidents, prime ministers and governments to come to the aid of their nations. Not hide behind the skirts of their experts. Governments have plunged their populations into the misery of unemployment and despair; not the experts. Governments must take the risk of more infections and death in relieving that despair; and the sooner the better. Like the end of this month and no later.

It is easy to close things down. Now let’s see how clever governments are in opening things up. And how brave they are in facing up to their responsibilities and taking accountability.

‘Arrest Me, Abbott, I Dare You’