The Rock and a Hard Place 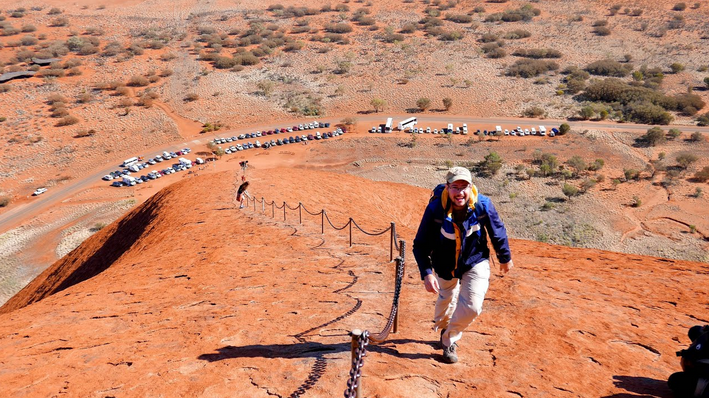 As geologist Marc Hendrickx has pointed out in his long, impressive but eventually unsuccessful campaign against the ban, the cultural traditions the National Park board relies upon are a very recent invention.

In articles in Quadrant and the national press, Hendrickx has pointed out that members of the Mutitjulu community endorsed the climb as far back as living memory extends. In the 1940s, 50s and 60s, they guided anthropologist Charles Mountford to the summit. Mountford recounted their creation myths in his 1965 book Ayers Rock, Its People, Their Beliefs and Their Art.

Hendrickx also points to the Lutheran layman, Lou Borgelt, who in 1946 climbed to the top with the help of two local Aboriginal guides Tiger Tjalkalyirri and Mitjenkeri Mick. A five-minute extract of Borgelt’s film of himself and his guides on the summit has been uploaded to YouTube and can be watched below.

In a note to Quadrant, Hendrickx writes,

The mainstream media’s overall response and reluctance to chase answers about historical facts about the climb and challenge Park authorities on the contradictions and inconsistencies has been disappointing to say the least, though I was not surprised that they took a position on it.

What “position” the media takes as tourist numbers see a likely decline, jobs are lost and the Rock’s heights off limits remains to be seen but a report in the Weekend Australian (October 26) suggests little basis for optimism:

Aboriginal entrepreneurs who want to fill the tourism gap left by closing the Uluru climb say they are being thwarted by red tape and urgent ministerial intervention is needed for their businesses to survive­ and others to develop.

The world-famous climb closed on Friday amid claims by authorities that there were plenty of other activities to sustain tourism numbers­, which have boomed as the climbing ban approached.

Should those “other activities” fail to attract visitors, expect to see a vicious circle take effect as flights are cancelled for want of passengers and fares increase as a consequence, meaning even fewer visitors and tourist dollars.

Despite the optimistic noises of those who pushed for the climbing ban, there is little reason to believe this won’t end badly.

10 thoughts on “The Rock and a Hard Place”