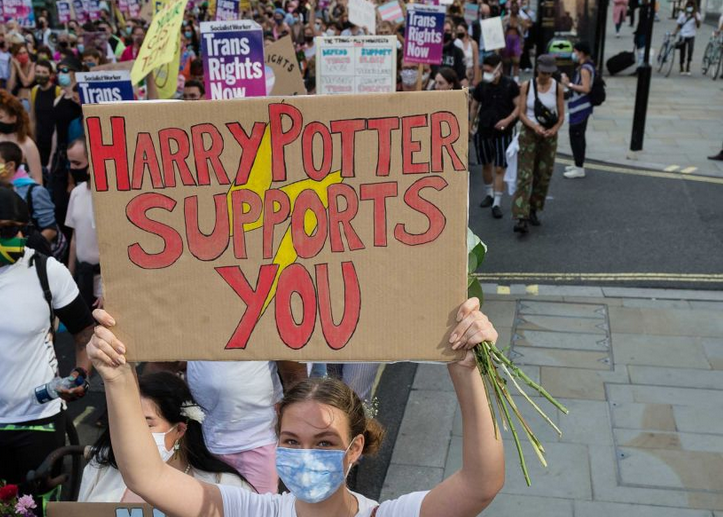 In the early 2000s, when I worked in a library in Ireland, a woman asked could I recommend a book for her child. At the time, Harry Potter was a worldwide bestselling phenomenon and libraries had long waiting lists for the next yet-to-published book in the series. I suggested her child read Harry Potter and the Philosopher’s Stone. The woman’s reaction was immediate and hostile. She replied that she would not allow any child of hers to read books about the occult. I realised that she was taking the fantasy world of the Harry Potter books a tad too seriously and that her ideology was perhaps a little strict for my taste.

In one sense, though, the woman was civilised and open-minded. She was repelled by what she perceived as the unchristian mythology of Harry Potter but she didn’t stop other people reading J.K. Rowling. She didn’t call for the Harry Potter books, the movies, or the annual Harry Potter Night, where children dress as characters in the books, to be banned, or for J. K. Rowling to be cancelled. She didn’t demand that people be sheltered from the terrible, in her mind, offensive and devilish ideas portrayed in the fictional world of Hogwarts and Voldemort.

In other words, she proved, in the only way that truly matters, that she was tolerant of other people’s genuinely-held beliefs. She was, in the end, a decent person because she was reasonable enough to understand that nobody can be an all-knowing, all-wise arbiter of other people’s thoughts or speech. She was, in fact, intellectually and morally humble. She didn’t impose her values on people who did not share her view of the world.

This is in stark contrast to critical social justice advocates who believe they are so intelligent, moral and all-knowing that they can decide what is good for everyone.

The J. K. Rowling imbroglio about women’s rights versus trans rights is a litmus test for contemporary justice. As the saying goes, I don’t have a dog in this fight. To put it bluntly, I’m not enamoured, for different reasons, about trans rights activists or Rowling. I admired Rowling because she encouraged more children to read than any other writer in history. That was an extraordinary achievement. I thought her books were a creative retelling of ancient myths, which is the quintessence of storytelling. But nothing is perfect and I do not like everything about Ms Rowling or Harry Potter. Fantasy, to put this in perspective, may stimulate our imaginations but it can distort our ability to see the world as it really is.

And Rowling has lived in the fantasy world of feminism her whole life. This has led her to unfairly attack her ideological opponents. Robust debate is necessary in a liberal democracy, but intellectual dishonesty should never be accepted. And there has been nothing, in recent years, more patronisingly moral, malicious and virtue signalling, at least until the advent of critical social justice, than the feminist establishment attacking anyone who criticises feminism. Specious claims of “sexism” or “misogyny” have become commonplace. Everyday words, which have had their meaning hollowed out by the scattergun approach of feminists, have been weaponised to create a culture where anything other than the outright worship of women for their unparalleled wisdom and virtue is now considered misogynistic. I don’t, for example, believe that women are made of sugar and spice and all things nice any more than I believe that all men are rapists. The sad thing is that this attitude, and the censorship that follows from this sensibility, is now the default position of contemporary culture. And Rowling has played a prominent role in creating the present-day politics of censorship.

Rowling’s, and other left-wing activist’s treatment of the Irish writer and Quadrant contributor Kevin Myers, who was falsely accused of anti-semitism, is one of the disgraces of modern journalism. Myers’ heresy, was not, as Rowling pretended, anti-semitism, but his criticisms of feminism. Rowling shared a tweet to her millions of followers on Twitter claiming that Myers was an anti-semite, which was not only untrue but demonstrably ridiculous at face value. The most pro-Jewish and pro-Israeli journalist in Ireland, who had spent his entire journalistic career condemning anti-semitism, was labelled an anti-semite. The Jewish Representative Council of Ireland issued a statement saying that calling Kevin Myers “either an anti-semite or a Holocaust denier is an absolute distortion of the facts”.

The irony was that every actual anti-semite or anti-Israeli bigot in Ireland jumped on the bandwagon, and with solemn-faces and without a scintilla of irony derided Myers’ alleged anti-semitism. Rowling, as far as I’m aware, never deleted the tweet or apologised for her slander. Myers’ career was cancelled because of the intellectual dishonesty of his ideological opponents. Rowling was more responsible than any other public figure for the cancellation of Kevin Myers. The timing of the Myers’ controversy was fortuitous for J. K. Rowling, though. It came soon after Rowling launched an ill-considered attack on Donald Trump, when she let her emotions overrule her critical faculties.

Days earlier, to put this in context, Rowling posted a video on Twitter, which had been disingenuously edited to show Donald Trump ignoring a disabled boy in a wheelchair. Her tweet about Kevin Myers was in the three-day interregnum between Rowling being told that the video contained false information, that Trump had not ignored the boy, and her deleting the offending tweet. She said, quoting Maya Angelou, that “when someone shows you who they are, believe them”, and she called Trump a “monster of narcissism” because he had revealed his real self by ignoring the disabled boy. She didn’t, however, amend her pop-psychological appraisal of Donald Trump when the information she based her claim on was proven to be wrong. Admitting you’ve made a mistake is the quintessence of good faith, but Rowling said nothing.

I disagree with J. K. Rowling’s politics, which are based, in part, on the feminist nonsense of the patriarchy and the pervasive stupidity of the “you go, girl” generation. Patriarchy and the idea of social construction are the twin pillars of feminist philosophy. The “patriarchy”, if we can dignify an idea which ignores huge chunks of history to score an ideological point, is simply the history of men and women using the division of labour to survive. As the world has changed, so have the relations between men and women. The biggest and most positive change has been the advent of capitalism, which created the contraceptive pill and also the welfare state, which freed women from relying on men to provide for their own and their children’s material needs. In this sense Marx was at least partially right: the material conditions of life create how we think about ourselves and our place in the world; and also what people expect from politics and society. Opportunity fuels and alters our expectations. J. K. Rowling’s feminist view of the world is well-intentioned but inane. It’s misguided because feminist thought is opposed to everything that has allowed the modern world to develop. Women’s liberation has occurred despite feminism not because of it.

Rowling deserves criticism because free speech is the only thing that keeps the barbarians outside the gates. But we all deserve criticism. I take no pleasure in saying this, but feminists are reaping what they’ve sowed. They’ve cancelled people for decades. The supreme irony about trans rights activists trying to cancel Rowling is that it was the feminist philosophy of socially constructed gender that led to the trans claim that biology is not a necessary condition of sexual identity. And it was the Harry Potter series that played a part, a small part, but a part nonetheless, in creating a generation that believes in the power of magic over reality. The vision of feminists walking into a trap of their own making would be an exquisite irony if it wasn’t so disastrous for freedom, human rights and democracy around the world.

Here’s the crux of the argument that every believer in democracy should make: everyone is wrong most of the time, and J. K. Rowling is no different to anyone else in this regard. It is a disgrace to the civilised notions of free speech and liberal democracy that trans rights activists are trying to cancel her for saying something that most of the world believes and has believed since the beginning of recorded history. Even if she is wrong that there are biological males and females, which she is not, she is entitled to her view.

What is an even bigger disgrace is that critical social justice activists, working behind the scenes in our public institutions, are cancelling everyone they don’t like. Take note, things are afoot that are an affront to the rights of freedom of speech and freedom of conscience. We’ve spent hundreds of years creating the foundations of a liberal-democratic order – in other words, not destroying people because they hold a different opinion; and now, the most falsely-educated generation in history is stealthily reintroducing the politics of identity through a takeover of our institutions and dominance of the public square. As Voltaire said, “No opinion is worth burning your neighbour”.

This is true, but not being allowed to have an opinion is the antithesis of everything that is good in life. Fight back against people who won’t tolerate dissent. Reject the totalising ideology of people who don’t have the sagacity or education to understand that the ground upon which our good fortune rests is the freedom to live according to our individual consciences.

Biology, not make believe, is the horizon of who we are as human beings. Even Heidegger, the greatest philosophical exponent of the social construction of human psychology, knew that some things are “pre-ontological”, in other words, biologically real. We can’t escape what Heidegger called ‘facticity’, which is the actual, not imagined, reality of the boundaries of our individual lives.

Having an IQ of 83 or being six-foot-two are facts we can’t change. Forcing people to say that you are intellectually gifted or that you are petite doesn’t change reality. And lying to people about who or what they are doesn’t help. It just postpones the inevitable confrontation with the reality of the world. The most civilised and prudent attitude to the manifold problems of existence is to have a soft heart and a hard mind. As Horace said: “You may drive out Nature with a pitchfork, yet she still will hurry back”.

Noticed COVID Isn’t Quite So Deadly of Late?

Mideast peace? Not for Obama there isn’t