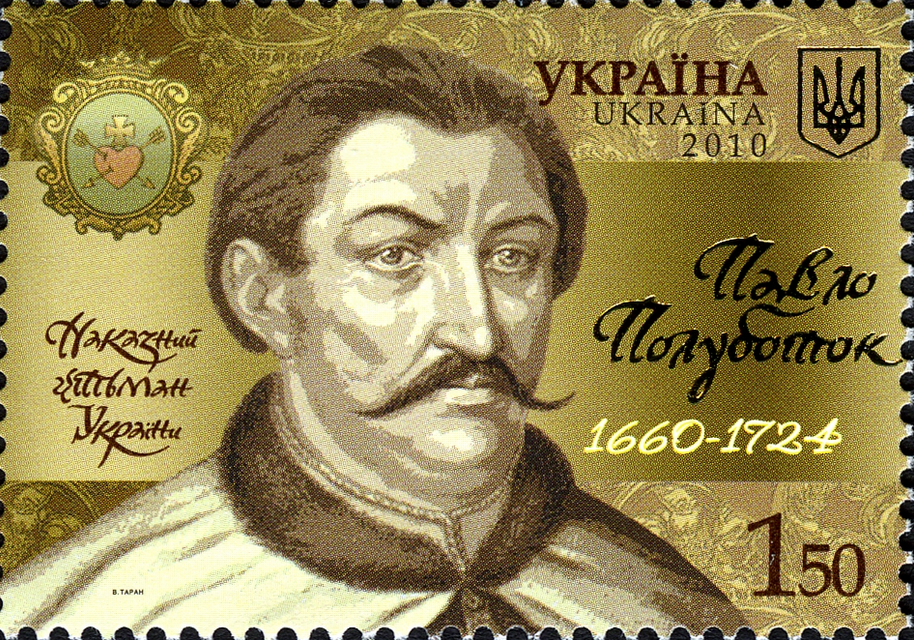 It was in the dying months of 1723 that the beleaguered Cossack leader Pavlo Polubotok, Acting Hetman of Left-bank Ukraine (depicted above on a 2010 postage stamp), dispatched his son, Iakiv, and three others to the northern port of Archangel. From there the party was to sail to London on a mission of the utmost secrecy and importance, for in the Cossacks’ possession was a wooden barrel filled to brimming with somewhere between 200,000 and 1,000,000 gold rubles, all of which were to be deposited with the Bank of England, or Lloyd’s Bank, or perhaps it was the East India Company Bank — the precise details of the clandestine operation have been lost to history.

While Polubotok’s fortune wended its way across the White, Barents, Norwegian, and North seas towards the Thames Estuary, Polubotok himself was awaiting his inevitable arrest at the hands of Czar Peter I. The Acting Hetman had long been a staunch defender of the principles of Ukrainian autonomy, as defined by the Pereiaslav Treaty of 1654, and had thereby incurred Peter Alexeyevich’s wrath. This was something best avoided if at all possible, for the czar possessed a remarkable temper, viz. his willingness to torture to death his own son. So when Peter dispatched Count Alexander Rumyantsev to investigate the Cossack leader for “conspiracy to promote the autonomy of Ukraine,” a capital offense, Polubotok’s downfall was a fait accompli.

By November of 1723 Polubotok had indeed been incarcerated in Saint Petersburg’s Peter and Paul Fortress, and within a year he was dead, starved or smothered by his captors (again, the exact details are indistinct from our vantage point). His rubles, however, were quite safe in England, their compounded interest earning the Cossack a certain type of afterlife. Polubotok, it turned out, had instructed the depositors that the barrel of gold represented a bequest to the Ukrainian people, albeit one that would not vest immediately. Only upon the attainment of a “free Ukraine” would the bullion be distributed, twenty per cent to his heirs, and eighty percent to the Ukrainian people as a whole.

In June 1990, as independence from the Soviet Union appeared increasingly inevitable, Ukrainian legislator Roman Ivanychuk giddily announced that the Bank of England would soon be owing sixteen trillion pounds sterling to the soon to be born Ukrainian republic, an amount reached by taking into account four percent interest on the deposit assessed over a span of 267 years. “This was not a legend,” the Ukrainian ambassador to the United Nations, Hennadii Udovenko, confidently announced at a press conference held in Geneva. It only remained to figure out just how the inheritance ought to be distributed. Either the government coffers in Kyiv would soon be overflowing, or the 52 million citizens of Ukraine could expect the delivery of roughly 38 kilograms of gold each.

It was too good to be true, of course, and as it happens “the most interesting thing about this fabrication,” as the Kyiv-born novelist Mikhail Bulgakov wrote about another tall tale, “is that it was all lies from start to finish.” Or, if not lies exactly, certainly wishful or magical thinking on an astonishing scale. While it is true that rumors of Polubotok’s gold had been surfacing regularly since around 1860, and had thoroughly been investigated by folklorist Alexander Rubets in 1907, no supporting evidence had ever been found. In those heady summer days of 1990 the Ukrainian Foreign Ministry and the Bank of England gamely tried to uncover a slip, a ticket, a corroborating document, or anything else that might confirm Iakiv Polubotok had deposited a hogshead full of golden rubles back in 1723, but again to no avail. Some Ukrainians held out hope that evidence could still be found buried in Soviet archives, while others worried that most ancient bank records had been set ablaze during Stalin’s crackdown on the monasteries. Most of sound mind would have to admit, however, that Polubotok’s true endowment was better understood, as the daily newspaper Holos Ukrainy concluded in 1992, as “the priceless treasure that is our history.”

The mythical Cossack gold had given rise to a poignant fantasy wherein a difficult national past was finally put to rights. As the politician and writer Volodymyr Iavorivs’kyi noted during the “gold fever”, Polubotok’s “will bequeaths the money only to a sovereign, Ukrainian state,” so “that old and abandoned independent history history, forgotten and abandoned by us, will work for us today.” But it did not work out after all, and, as historian Serhy Yekelchyk later wrote, the imaginary barrel of rubles quickly became an encapsulation of the experience of Ukrainian independence, which likewise “completed a circle from exciting to disappointing to carnivalesque.”

Ukraine’s collective need for escapism is entirely understandable. From time immemorial the country has been fought over and torn asunder, owing to its strategic position in Europe (its very name means “borderland”), its inviting Black Sea ports, its rich mineral veins, and above all its black earth. The Romantic poet Taras Shevchenko often compared his country’s neighbors to ravening jackdaws, carrion birds that delighted in tearing sinews of raw flesh from the Ukrainian body politic. The Polish-Lithuanian Commonwealth, the Russian Empire, the USSR, Poland, Nazi Germany, all these and more have at various times posed an existential threat to Ukrainian national ambitions — and Ukrainians themselves, as a matter of fact. The many millions that perished in two world wars, the Stalinist Holodomor terror famine, and the Shoah speak eloquently to this tragic state of affairs, and this is the real reason why the legend of Polubotok’s gold was able to gain such purchase on the Ukrainian collective psyche. How comforting it would be if, thanks to the foresight of an eighteenth-century Hetman, Ukraine could at last be freed from the ever-present specter of resource extraction, invasion, and abject servility. 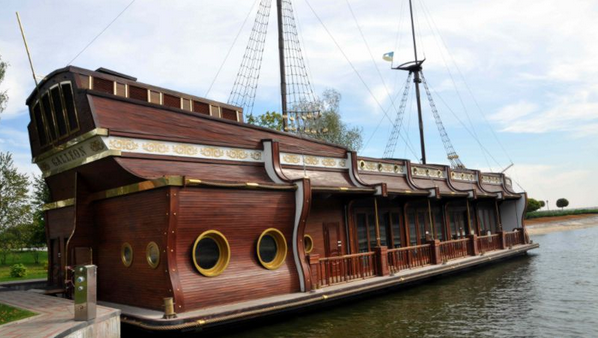 At several points during the last two decades Ukrainians have been given cause to hope that they might finally get out from under the great wheel of their tortured history. But the Orange Revolution (2004-2005) was a rather short-lived affair, and Ukraine soon found itself again languishing under a Russian-oriented kleptocracy, one best exemplified by the ousted President Viktor Yanukovych’s obscene Mezhyhirya Residence, with its man-made lakes complete with mock galleon (above), helicopter pads, ostrich farms, and unbelievably tasteless décor. (The palace has since been turned into a sort of museum of corruption). The 2014 Euromaidan Revolution likewise paved the way for liberalising reforms, but the menace of oligarchy and endemic corruption never went away, hence the decisive 2019 election of the outsider Volodymyr Zelensky on a reformist platform.

One notes with interest the October 9, 2019, press conference given by Ukrainian member of parliament Andriy Derkach, in which the Verkhovna Rada member alleged that foreign figures like Alexander Kwasniewski, Hunter Biden, Alan Apter, and Devon Archer all received considerable payouts from Burisma Holdings, while adding that “using political and economic levelers of influencing Ukrainian authorities and manipulating the issue of providing financial aid to Ukraine, Joe Biden actively assisted closing criminal cases into the activity of former Ukrainian Ecology Minister Mykola Zlochevsky, who is the founder and owner of Burisma Group.”

It seems that the shifting of Ukrainian allegiances from East to West post-Maidan did not fundamentally alter age-old dynamics. Ukraine remains an unstable, liminal space in which one can, given a certain moral flexibility, make quite a killing. What is genuinely surprising is that Ukraine, having been fought over for centuries by its neighbors, has somehow been dragged into the bear garden of American domestic partisan politics. Names like Zelensky, Zlochevsky, and Shokin are bandied about in Western papers, blogs, and news programs, and facets of Ukrainian-American relations are used to support either a threatened impeachment of President Trump, or an investigation into the allegedly underhand dealings of Joseph Biden and his progeny.

Without the security offered by Polubotok’s missing gold, it would appear that Ukraine is fated to be forever picked over by “jackdaws covering the plain,” as the poet Shevchenko put it, regardless of whether those scavengers hail from within or without the nation. But Shevchenko had another notion, from which some consolation might still be derived. In his 1845 play The Great Vault, he described the plundering of the great Cossack Bohdan Khmelnytsky’s tomb, taking macabre pleasure in the fact that when the Russians broke in after three days of excavation, expecting to find mounds of jewels and coin, instead “they were terrified,” for

There Bohdan’s treasure lay:
A potsherd and a rotten trough,
And skeletons in chains.

Thus in Subotiv Moscow dug
The small vault as her prize;
Still she has not yet discovered
Where the Great Vault lies.

Ukraine’s small vault has been pretty thoroughly ransacked by now, but somewhere the “Great Vault” exists unspoilt. But the latter vault is not, as some might have hoped, an actual tomb full of Khmelnytsky’s treasure, or a bank account set up by Polubotov. Even during the “gold rush” of 1990, there were Ukrainians who understood this. The historian Oleksandr Kovalenko had insisted that Polubotok’s real treasure was his “love of the native land,” while the newspaper Molod’ Ukrainy declared that

time will pass and we will understand that Polubotok, who dared to come out against the insane Asiatic satrap, the first Russian emperor Peter I, and became his victim, left us more than gold: a sincere striving for an independent Ukraine, a will to see our fatherland not bounded by shackling agreements with the neighboring rulers.

Ukraine has always been obliged to contend with satraps to the east. Lately it has had to navigate threats from the West as well, including, as  alleged by Adriy Derkach, that

using political and economic levelers of influencing Ukrainian authorities and manipulating the issue of providing financial aid to Ukraine, Joe Biden actively assisted closing criminal cases into the activity of former Ukrainian Ecology Minister Mykola Zlochevsky, who is the founder and owner of Burisma Group.

It is fervently to be hoped that somewhere beneath this shambles the Great Vault of Ukraine’s future remains undisturbed, awaiting the day when the nation is independent not merely in name, and can take its rightful place as an equal member in the concert of nations.