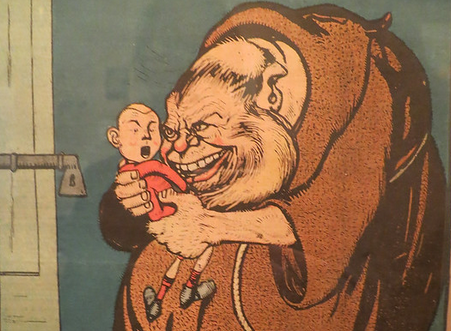 We’re in the middle of a deeply disturbing and dangerous phenomenon, in a sense inevitable, like the Reign of Terror, Communism, the Holocaust, McCarthyism, the #MeToo Movement and other human events where reason takes flight and humanity finds itself plagued with uncontrollable chthonic forces.

In theory, the case against George Pell should be about whether he is guilty of the specific charges against him. In practice, his case is really about something else. It’s part of a broader war over what he symbolises to those among the clergy, laity, and those within and without the Church who see him as a symbol of something awful, some ancient regime where women are meant to be submissive as men oppress them according to some Divine plan.

Recently, this line of thinking was argued forcefully by a religious Sister who regards the Pell case emotionally, rather than legally, in terms of the suffering it has caused Catholics. Following the trajectory of Sister’s deeply felt sense of what’s wrong, the legal question of Pell’s hypothetical innocence is irrelevant. Through Father Frank Brennan, who still hopes for truth and justice, and Archbishop Comensoli, who still maintains Pell’s innocence, the Church is wicked to pray for his vindication. The real issue is the perception that, in the past, Pell and other bishops supported the criminal rather than the victim, thereby ignoring the harm they did. In shielding the criminal from the consequences of his actions, the sufferings of their victims were multiplied and the numbers of their victims were increased.

Although it may be a show trial, nevertheless the Pell case demonstrates an immeasurable betrayal of trust. Catholics feel betrayed, Sister says, because their representatives were unworthy, and the laity’s deference to the clergy gave them the opportunity to do great harm. Following this line of thinking, the Church shouldn’t focus on Pell’s hypothetical innocence. Rather, it should help survivors integrate their sufferings into Christ’s sufferings for the sake of the Church and all humanity. To that I say good luck. Australians aren’t habituated to offering up their sufferings to Christ and the number of Catholics who are has decreased dramatically.

While any semblance of objectivity around the Pell case is impossible, I make four points, which keep falling on deaf ear:

Second, every institution, secular or religious, managed child sexual abuse in the same risk-management way before the introduction of statutory guidelines.

Third, in purely statistical terms, children have always been safer in Catholic institutions than their own homes, where the vast majority of abuse occurs at the hands of someone within the family or known to it.

Fourth, it’s not rational to conflate the specifics of the charges against Pell with the broader hostility towards him as a conservative Christian.

What is uniquely sinister about the Pell case is the way it brings out the darker side of human nature. In a purely evidentiary sense, the Pell case parallels Justice Brett Kavanaugh’s Senate Hearing in the US, where the motives against him were glaringly political and their vindictiveness glaringly obvious. While the case against Pell was notoriously weak, motivations for convicting him were strong, and our judicial system is permanently compromised as a result. As Jesus said on the Cross: “Father, forgive them; for they know not what they do”.

Michael Giffin is a priest in the Anglican Diocese of Sydney

Chaucer and the modern pardoners

Some ‘marriages’ are more equal than others