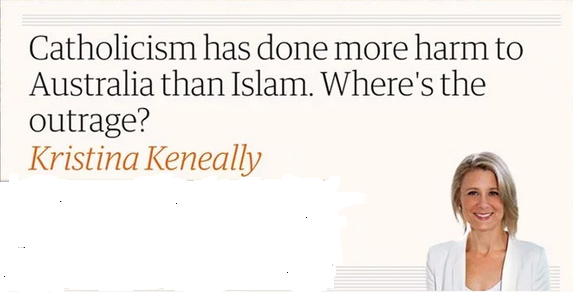 Kristina Keneally is hopelessly muddled about how freedom works, specifically freedom of speech and freedom of religion. I’m sure she’s had it explained to her before, but comprehension yet eludes her – an alarming observation to make of a Senator. Leftists are often so mired in the prejudice of their anti-freedom propaganda they often end up shadow boxing, fighting against things no serious person believes.

Take, for example, yesterday’s eleven-part Twitter challenge to the Prime Minister doubling down on her insistence that someone who tweeted something vile he then regretted, deleted and apologised for three years ago should be banned from speaking within our borders. Never mind the fact such censorious tactics only ever serve to amplify the voice leftists seek to silence. Here is the stream-of-consciousness series of tweets Ms Keneally shared with the world:

Been thinking a lot about a John F. Kennedy quote over the weekend, and what religious freedom in Australia really means. Short thread 👇, starting with the quote from the first and only Catholic President of the USA, JFK

“For while this year it may be a Catholic against whom the finger of suspicion is pointed, in other years it has been, and may someday be again, a Jew – or a Quaker or a Unitarian or a Baptist …

“Today I may be the victim, but tomorrow it may be you – until the whole fabric of our harmonious society is ripped at a time of great national peril.” – JFK

When we allow speakers to come & vilify our Islamic citizens, or speakers with links to anti-semitism & Holocaust deniers, or when our (Liberal) MPs stand on stage with them as they will this weekend at CPAC, what damage to we do to “the harmonious fabric” of Australian society?

I agree with @ScottMorrisonMP that Australians have a right to practice their faith free from vilification. I support freedom of religion. Unlike Senator Stoker, I think the Morrison Govt was right to ban Milo Yiannopoulos for his comments that Islam is “alien” & “barbaric”

Freedom of religion isn’t just for one faith – it is for all faiths. This is what I don’t get when I look at the @ScottMorrisonMP Govt’s stance on Mr Raheem Kassam.

The Liberals seem to think Mr Kassam’s “free speech” to call Islam “fascistic and totalitarian” or say that the Quran as “fundamentally evil” is more important that the right of Muslim Australians to practice their faith free from vilification.

Here’s a question for the PM: @ScottMorrisonMP – where, in your mind and within your goverment, does free speech become hate speech? What do you do when one person’s “free speech” buts up against another person’s freedom of religion?

If a speaker was coming to Australia to speak at a conference with Liberal MPs, and that speaker described the New Testament as “fundamentally evil” & Christianity as a “fascistic” – I imagine Mr Morrison, like me, would be very angry. Such comments would vilify us & our faith.

Frankly, I suspect such a speaker would be banned immediately under Section 501 of the Migration Act. I can’t even imagine we would be having a discussion.

So why isn’t @ScottMorrisonMP standing up for the religious freedom and beliefs of our Muslim citizens? Why is he allowing the harmonious fabric of our society to be ripped apart? Why are his MPs supporting this conference?

John F. Kennedy was indeed a great president, and Democrats would defeat Donald Trump in 2020 if they could find another so far removed from their current extreme positions. Here is another of his quotes, far more pertinent to Ms Keneally’s topic which — surprise! surprise! — she conveniently ignored:

I appreciate what President Kennedy did not do, which was to censor those whose speech he did not like or agree with. He did criticise them from his convictions of right and wrong. I could end the article there, highlighting the classical conservative position on freedoms of speech and religion. The expression of my convictions in articulating criticism of ideas and ideologies – be they Christian, Islamic or Spaghetti-Monstarian – does not extend to me being authorised to limit other people in the expression of theirs.

Freedom of speech can never “but (sic) up” against freedom of religion. They don’t exist on the same plain, certainly not if we’re talking about a Western democracy and Christianity, which doesn’t seek and has never enjoyed freedom from criticism, even open ridicule. Christians and Christian beliefs are openly and frequently criticised by both sincere cynics and Christophobes – and it is absolutely their right to do so, however distasteful many will find it.

Freedom of religion must never be considered to require freedom from criticism. Any religion, ideology or agenda seeking the State’s protection from criticism is admitting it has much to lose upon closer scrutiny. In seeking the State’s protection Ms Keneally would extend by way of visa cancellation, it turn the State into a weapon with which to wage war on critics. The State has becomes its shield, servant and enforcer, bearing no resemblance to the liberal democracy it should be.

Ms Keneally willingly complies with this tendency to tyranny when she employs confusion tactics typical of the radical Left by conflating attacks upon ideologies as attacks upon identity — but only to protect just a favoured few. In effect she is calling for blasphemy laws to protect just one ideology. Her Nibs is mute when Christianity is critiqued. Did she utter a peep, for example, when comedienne Judith Lucy’s ABC-broadcast series on religion made repeated sport of Catholicism?

It is for each person to decide what is “hate speech” and to ban it only from their own lips. The only democratic remedy to what we perceive as hateful ideas is not to ban them from entering the nation or otherwise censor them, but to publicly expose their flaws with better ideas and superior arguments.