Volley of the Dolts

So in keeping with the bogus medicalisation of everything, from labelling Tiger Woods a ‘sex addict’ to trying to ram drugs into young boys who don’t sit perfectly still in class in Year 3, let me confess to being a sports addict.  Antipodean sports on TV?  I’ll watch them. North American sports?  I’ll watch them.  Netball?  Yep, that too.  (The athleticism through the middle is fantastic though I confess, as an ex-basketball player, to hating the way defence against shooters appears to boil down to a defender waving her hands arhythmically.)

And yes, I am someone who can watch golf on TV. Give me a Ryder Cup and I’ll happily while away a day.  Same for a British Open.

All of which brings me to tennis.  I’ve played it.  I used to love it.  I still sit down and watch Wimbledon and the Australian Open.  But truth be told there’s something terribly wrong with the game right now, at least in my view.  And I don’t simply refer to all those hyper-indulged, self-entitled brats.  Who can bear watching, let alone hoping for, a grunting 21-year-old who curses and pirouettes in equal measure?  Frankly, I was hoping for Raonic over Kyrgios just because the Canadian seemed infinitely better behaved than our home-grown option.  And please, Lord, stop all the shrieking in the women’s game.

But I confess that my enjoyment of the game of tennis has been restored in the last two days.  I found myself a new favourite tennis player not named ‘Federer’.  He’s a dreadlocked Jamaican-German by the name of 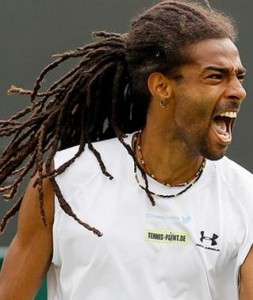 Dustin Brown (left).  This is the guy who beat Nadal.  It was a joy to watch.  I felt as though I had slid into the driver’s seat of a Delorean sports car, hit 88 miles per hour, and gone back to the future, around the year 1984 or so.

Here was a touch serve-and-volley player of the sort I once palely tried to copy.  Here was a throwback to the days when watching men’s tennis involved seeing two different playing styles, and strategy, and anything other than the tedious 32-hit rallies involving huge top spin, next to no net play, and basically one of the most boring sports offerings going – unless it’s the semis or finals of a Grand Slam when the interest is provided by ancillary things.

No, though I’d never heard of the man until two days ago, count me today as a huge fan of Dustin Brown.  His attacking serve-and-volley style was doubly impressive in the context of today’s game, where the racquet technology has made such play, well, almost impossible.  But Brown, who hasn’t even reached the heady heights of ‘journeyman’, played it so beautifully that the great Rafael Nadal was totally flummoxed.  Nadal no doubt couldn’t remember the last time he faced a player who resolutely would not let rallies on his serve go beyond 3 or 4 hits.  I give away my age when I say this, but it was magical.

And Brown had class on the court. There was no grunting or shrieking; there was no ‘spoilt brat’ behaviour that characterises too many of the Australian contingent.  As I said, it was magical.  I want this Jamaican-German to win the whole thing.  As you read this piece, no doubt that wish has collapsed in the face of harsh reality.

But for those who love sports, this sort of thing is why.

(On a wholly different note, and as someone who lived for eleven years in the wonderful small university town of Dunedin, New Zealand, tonight may see that place’s Highlanders defeat all the predictions, and the many big budget, big city rivals, and win the Super 15 Rugby.  It would be the making of a Hollywood movie if they do.  Go Highlanders!)

5 thoughts on “Volley of the Dolts”

Hold Your Nose vs. Punch His Nose