A new book by Harry Stein, with absolutely no relevance to Australia.

In the Age of Obama, the racism charge, rather than abating, has become more prevalent than ever. Why? Because to tell the truth about matters like crime, racial profiling, social fallout of single parent homes, or the ways racial preferences distort the very 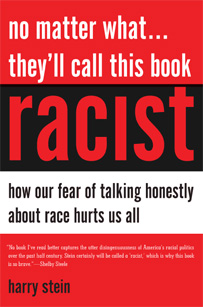 meaning of equity and justice would mean facing up to the soul-destroying pathologies of urban black culture. Instead, black leaders and their guilty white allies blame these problems on historic oppression and lack of government aid, and demonize those who challenge such views as – what else? – racist.

In No Matter What… They’ll Call This Book Racist, Harry Stein attacks the unspoken prohibitions that have long governed the conversation about race, not to offend or shock (though they certainly will) but to provoke the serious thinking that liberal enforcers have until now rendered impossible. Stein examines the ways in which the regime of racial preferences has sown division, corruption, and resentment in this country. He pays special attention to the stifling falsehood that racism has mired millions of underclass blacks in physical and spiritual poverty. The real problem, says Stein, is the culture of destructive attitudes and behaviors that denies those in its grip the means of escape.

For all the remarkable progress this country has made on race in the past half century, liberals insist, for their own political and psychological purposes, on clinging to the notion of America as irredeemably racist. We – and especially black people – for too long have been living with the terrible consequences of that cruel canard.

Arthur or Martha, Why the Big Deal?

Mad, Rad and Dangerous to Knowledge

The War on Nixon