Pre-emptive surrender is now the order of the day, as Paul Sheehan reports in The Sydney Morning Herald.  On the eve of a speaking tour by Geert Wilders, leader of the Party of Freedom in Holland, the following venues, Hilton Hotel, North Sydney Leagues Club, Sydney Masonic Centre, Wesley Convention Centre, Luna Park Function Centre, the Concourse at Chatswood and the Sir John Clancy Auditorium at the University of NSW, refused bookings by the tours’s organisers.

In earlier years, these venues would have accepted bookings but then cancelled after threats from some obscure Islamist group promising death and destruction. Now it appears that Islamists need say nothing. The owners of those venues, plus a church-based facility in Sydney and the Burswood Casino and other venues in Perth, understand their duty under the New Order. Westpac Bank also understands its duty. Sheehan quotes tour organiser Debbie Robinson as follows:

"I was organising an e-way payment system with Westpac to link to the website of the Q Society [the sponsor of the tour]. I received a call from a manager who said the Westpac Risk Management Team had decided the material for sale was offensive and inappropriate and therefore they would not proceed with the e-way system. I asked to speak to the manager responsible and was told he was on leave."

"Earlier in the year I approached APN Outdoor to arrange a four-week run of bus ads in Sydney. The artwork was forwarded to them and I was quoted a price for the job . . . Then I was advised they would not be able to run the ad as it was too political and would result in the buses being damaged and defaced. They would not say who would do the damage."

The truly alarming aspect of all this is the almost-Pavlovian response to any prospective critique of Islam’s more troublesome adherents. The house-trained reaction is to label critics as extreme right-wing agitators or toxic racists, notwithstanding that Islam cannot be defined in racial terms. The largely successful demonization of Wilders — supporter of democracy, freedom of religion, feminism and gay rights, as Paul Sheehan points out — is testimony to the increasing constrictions on civil discourse and our retreat from freedom since the end of the Cold War.

This retreat from freedom of speech is insidious precisely because, for the moment, most of us feel unaffected. Wilders is a somewhat inconvenient person. Never mind that he is under constant guard because he is under constant threat from Islamists. We half wish he would go away and let us enjoy the summer break. 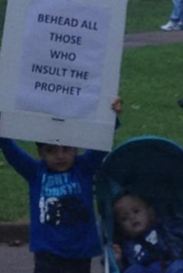 Unfortunately, our multiculturalism has led to the embrace of a false diversity, and a loss of a sense of identity which would provide a solid foundation to defend our freedoms.  How convenient it would be if Wilders was indeed some Nazi-style racist, the embodiment of evil.  Then the prevarications of Immigration Minister Chris Bowen might seem to make sense, at least to some. As things stand, Taji Mustafa, a spokesman for Hizb ut-Tahrir, an organisation that is both an apologist and advocate for jihad, was allowed into Australia with alacrity while Wilders was being frozen out.  Know your enemy indeed!

In just twenty years, we have become in subtle ways less free. In dealing with violent jihadis and the aftermath of the September 2001 attacks on the US, there was some recognition that asymmetrical warfare is the new reality. Less well recognised has been the role of asymmetrical politics. Here, anticipated and as-yet-unuttered threats of violence have dictated new constrictions on civil society.

Conceding an Islamist minority such leverage has been the most destructive outcome of our multicultural dispensation. So far.

Christopher Carr is a frequent contributor to Quadrant Online

The Shoes of the Fisherperson

A brave man in Sydney