Constitutional Recognition and Those Judges 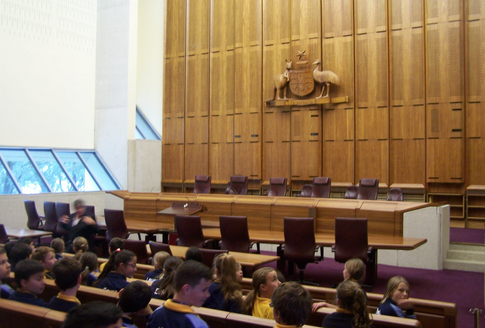 In the last little while we have now had two former Chief Justices of the High Court of Australia weigh in on the issue of recognising indigenous Australians in our Constitution.  This will shock you, I know, but both are broadly in favour. You probably didn’t see that coming from top members of today’s legal fraternity, did you?  Or in less sarcastic terms, I think all readers know deep down that the chances of hearing a top former judge come out against this sort of proposal are orders of magnitude less likely than having former top judges come out in favour of this latest ‘progressive’ cause de jour.

What is more surprising is that the Morrison government, fresh from its big recent election win, would be daft enough to bring this issue back from the deceased state it was in after former Prime Minister Malcolm Turnbull (of all people) seemingly killed and buried it, at least until the day a Labor government came into office.  Why would any supposedly right-of-centre governing party (or opposition, for that matter) use up tons and tons of political capital pushing an issue that (in my view) the majority of its core supporters oppose, and oppose viscerally and strongly?  I suppose one answer is that big chunks of its elected MPs are not all that in tune with the party membership.  After all, that’s something we know for a fact can happen just by looking at the Tory party in Britain and the three years of hell former Prime Minister Theresa May and her overwhelming ‘Remain’ cabinet dragged that party through.  Picking Boris Johnson could only have happened in a situation where the Tory MPs over there knew they had moved so far away from their core supporters that they faced imminent political extinction.  And even then these MPs may have waited too long to move to Boris (though so far, I must say, Mr. Johnson is performing brilliantly for those of us keen for a Hard Brexit from the godawful European Union).

At any rate, maybe the Morrison government is just the Turnbull government in slightly less, but only slightly less, progressive garb, one that thought the big election win gave it scope and freedom to do what deep down it had long desired to do but that Turnbull felt he couldn’t when he ruled out this constitutional recognition gambit?  Or, alternatively, perhaps PM Morrison has himself swallowed the Mark Textor Kool-Aid and figures the base of the Liberal Party has nowhere else to go and will vote for his government pretty much regardless of what it does, at least as long as the odd ‘cancel out bracket creep by throwing a moderately meagre tax cut at them’ bone is thrown to the base every once in a while?

I don’t know, but part of me now wants this s.128 constitutional referendum to go ahead.  Why?  Because I think it will lose and be put to rest for at least a decade or so.  Bring it on, baby!

Sure, the whole of the billion-dollar ABC behemoth will be in favour.  All of the Labor Party will too.  Most of the Libs will get on the PC express as well.  Likewise the newspapers will overwhelmingly get behind it, and odds are that will include The Australian as far as its lead editorials are concerned.  So the vast preponderance of the establishment, including virtually all of the corporate and legal castes, will be pushing this ‘recognition’ gambit too.

But still it will lose.

You can blow all the smoke you want at this but the clear fact remains, what is being proposed is that some people will end up with more say and political input than others based purely on the roll of the genetic dice. Get classified as ‘indigenous’ and you will have this extra ‘voice’.  Maybe we can call that a ‘race-based’ test; maybe we can’t.  Who cares about the terminology?  The proposal stinks and I’m betting Australian voters will think so too.  And pointing out that we have other ‘race-based’ elements in how we’re governed is a terribly fallacious argument.  So is the qualifier that Parliament will remain in control.  Change it to a ‘voice for white, middle aged men’ and then try to run the argument.  You’d be laughed out of the court of public opinion in a second.  This proposal is even worse than New Zealand’s reserved seats for Maori in their unicameral Parliament because at least there they only get one vote and have to choose to vote on the general rolls or the Maori rolls.  So be prepared to be called ‘racist’ and let’s vote this thing down.

Let me finish by returning to our two top judges now flogging this ‘recognition’ and ‘indigenous voice’ proposal.  You see one of the big worries of opponents, like me, is that any proposal of this sort will be a license to our top judges to use it to invent new constitutional outcomes that limit the elected Parliament.  Trotting out former top judges is tactically wise if you’re trying to calm down the voters on this front.  So let me tell you a small fact about Mssrs Gleeson and French.  Both were at different times on the court and decided with the majority of the High Court in cases broadly related to the so-called freedom of political communication.  In 2007 then CJ Gleeson wrote with the majority in Roach.  He took some eight paragraphs to decide the unelected judges had a supervisory role in vetting Commonwealth legislation related to prisoner voting.  The High Court struck down 4-2  the Howard government legislation in question.  What was the basis for this judicial power?  In my view it was pure judicial activism and made-up case law, as I set out at length in a Melbourne University Law Review article back in 2012.  If CJ Gleeson could reach that outcome based on an earlier 1992 High Court case, and nothing else other than other High Court cases, he’s got a lot of selling to convince anyone that this ‘voice’ proposal can’t be used by future High Court judges to do just about anything.

Then there is former Chief Justice French.  He followed the Gleeson precedent in the 2010 Rowe case and with other High Court justices invalidated yet other Howard government legislation, this time over when the electoral rolls could close.  This was litigation sponsored by GetUp! and nominated by Professor Anne Twomey as the worst High Court case ever up until that date.  I agreed with her.  It seems to me to be based on nothing at all in the actual written Constitution and an awful lot on judicial druthers (see that same law review article mentioned above).

In fact do you want to know how bad things have gotten?  In the recent Brown case the High Court struck down and invalidated Tasmanian legislation as unconstitutional without anywhere in the hugely long judgment pointing to any actual provision in the (you know) actual written Constitution. Not a mention of any section at all, not one.  It was a judicial pointing to past precedent piled on past precedent — a house of cards but without the house or the cards.  If you want the detailed critique, with all the expected legalese and references, I have a law review article coming out very soon.  But think about that.  Our top court is today prepared to invalidate legislation passed by a democratically elected legislature on the supposed basis it is unconstitutional and yet it cannot point to any actual anything anywhere in the written down Constitution.  It’s the ‘vibe’, or at least the ‘judicial vibe’, what dunnit.

I will be blunt.  I don’t trust our top judges.  Nothing Mssrs Gleeson and French have said gives anyone who, like me, is worried about how this recognition proposal might further empower our top judges any grounds for lessening their concerns.  As things stand, our top judges are seemingly dying to join the world’s ‘bill of rights’ club and are simply giving themselves ‘is what the legislature did in our view proportional’ powers out of thin air.  At least that’s my take.

Whatever else this ‘recognition’ and ‘voice’ proposal turns out to be, since no one yet has been given any real detail, it will be mightily useful to activist judges.

James Allan, Garrick Professor of Law at the University of Queensland, is the author of Democracy in Decline

A new low from the Literature Board