A Little English Discipline Would be ‘Noice’ 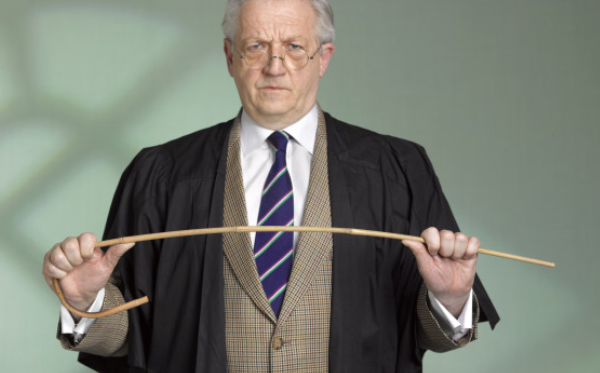 This gal on Fox News kept referring to President Trump, when in Japan, as being “in route” (pronouncing it “in rowt”) to some meeting or other. “En route” pronounced “on root” did not accord with her way of talking; nor even “on rowt.” Does it matter? The language evolves. Well, it matters to me. Is it just my sense of hearing, born simply of what I am used to, that I find “in rowt” terribly ugly?

I heard something as being in someone’s “purvey” (not “purview”) only a couple of days later. Was this a slip? Maybe, but such slips happen very often on air these days and children and young people might be listening and taking their cues.

A French woman who tended to the graves of fallen Allied soldiers immediately after WWII and beyond did so in order, so it was described, to “pay her gratitude.” Pay? When was the word “express” replaced by “pay?” Am I wrong to find this perplexing?

More often than not, I hear news commentators say “on behalf of” in circumstances when “on the part of” is more appropriate and clearer. For example, an interviewer might say, “that was a quick decision on your behalf.” I wonder who has made the decision. In fact, the decision was made by none other than the person being interviewed. I cannot see that replacing “part” by “behalf” in this instance represents a sensible evolution of the language; though, to be fair, Fowler tells me it had currency in the distant past.

We must have all noticed the fast-coming oblivion of the adverb ending in “ly.” Here are just a few of the many instances that I have heard recently from people on air:

It is something that comes natural / You will feel different / We did everything correct / It has not worked perfect / She sings it so beautiful / Are you going to take this competition serious / They are doing it safe / We’re doing absolutely phenomenal / What do you say to people who say you are acting hypocritical – What I say is can you rephrase the question and not mangle the language.

And, of course, almost everybody on air in Sydney should make a point of seeing My Fair Lady. The rain in Spain falls mainly in the plain not in the “pleine” — which will have to serve as my attempt at a phonetic reproduction. This offence to the ear could be heard over and over again during the election “campeine” season. I tested this pronunciation with four older chaps, all Australian born, with whom I regularly have coffee. All responded with “campaign” in accordance with the admonitions of Professor Higgins.

Exaggerated Strine has its place in movies not, I humbly suggest, as an English-born chap, on air. For example, “nowt” is a perfectly understood Yorkshire-ism and Liverpudlians have a nasal affliction and congenitally use the word “done” for “did.” But it is best, in my view, to keep these and other abominations off the national airways for fear of them corrupting young minds.

Let me be clear. I am very far from perfect when it comes to standard English expression and am all too frequently corrected (gently) by those around me with a finer sense of the language. After all, I was born in Liverpool, England, whose inhabitants, as I note above, are not known for exemplary pronunciation. That said, the BBC on the wireless played in my formative years and in those days no irritating regional accents polluted broadcasts. Subliminally and consciously I took note.

As a result, I try to use the right word and pronounce it correctly. Admittedly, this has left me isolated somewhat in still pronouncing numbers of words, for example, schedule, forehead, harassment and controversy, in a way which clashes with prevailing fashion; and in stubbornly sticking to the original meaning of words such as “replica” and “oxymoron” and “fortuitous” when the world has clearly moved on. What this shows is that the language, the meaning of words and their pronunciation evolve and we can’t be stick-in-the-muds. But that doesn’t mean that it should be a free for all.

Evolution is one thing; devolution another. It would be helpful, I suggest, if those on air, particularly those presenting news and current affairs programs (see I have evolved in not using “programmes”), studied, practised and maintained a standard of English and English expression to which we could all aspire.

Incidentally, if I am being critical it is of broadcasters not of common folk, such as myself. Hmm? I think that the word “myself” in that sentence should be “me.” Shouldn’t it? I think it should, but would gain confidence if broadcasters took care to get things right and provide a template for us common folk to imitate.