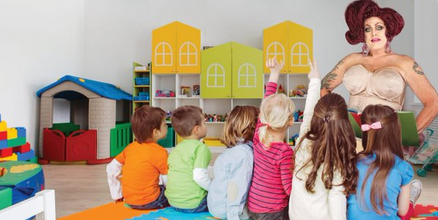 Steven Marshall is both Premier and Arts Minister of South Australia, so if anyone bears responsibility for the latest manifestation of the Safe Schools attack upon childhood innocence in this Liberal-governed state it is, I am sorry to say, him. We are in the middle of a bi-annual event here in Adelaide called the DreamBIG Children’s Festival, backed the Liberal government. It is jointly funded by the Arts ministry and the Education ministry and used to be called the “Come-Out” festival but that spoke too indiscreetly, I suppose, about the activist purposes of the bureaucrats who organised it.

This year, and specifically marketed to children under the age of eight, the programme included something called Drag Queen Story Time.

Yes, I am telling you the truth. It was staged in the august State Library in the heart of Adelaide. I went along, with intentions I will describe in a moment, and witnessed two of the performances. They involved two middle-aged men dressed as frumpy fairy tale Queens (one with devil’s horns) reading stories — haltingly and without charm or any kind of narrative tension — to pre-school and very young school-age children in the presence of their parents. 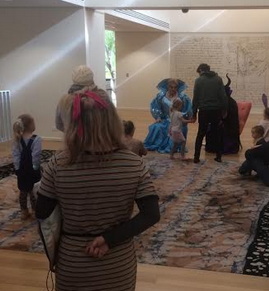 At the end of each session an opportunity was provided for the kiddies to meet and pose for photographs with the drag queens. Again, I am sorry to say I am telling you the truth. The photographs I took — one of which is at left — tell you I am. (Apologies, too, for my substandard lensmanship. Below, if you scroll all the way down, you’ll see another example of drag queen story time time, this one from the US. ‘The hips on the queen go swish, swish, swish‘. Why is it we adopt bad ideas and trends so readily from across the Pacific?)

The gender fluidity cult’s foundation is sheer irrationality after all; gender is to be seen, they contend, as a “social construct” and this notwithstanding that they know what we all know: that every cell in every one of our bodies betokens that we are indisputably forever male or forever female from the moment of our conception (save perhaps for the rare, rare, phenomenon of hermaphroditism).  If such people can think themselves out of the basic structure of biological reality perhaps they were able to think their way out of the common sense of propriety involved in staging such an event in the presence of and focussed upon the minds of infant children.

When I was alerted that this was being done to our children, shortly before the last performances, I determined to go along and do whatever was necessary to disrupt them. I would not use vulgar language or be threatening or violent, of course, but I would do whatever was necessary to interrupt the event and challenge the organisers and readers and the parents present to confront what they were doing. What they are doing is using innocent children to promote a specifically political agenda and a radical, culturally marxist, one at that . Drag-queens-men dressing a women in garish and clichéd faux-glamorous outfits are an adult phenomena, albeit a very low order one in my view. Sexual tropes are never far from the surface, when they are not actually front and centre. Children should never be corralled or hustled in to any kind of experience which sexualises their psychology and perception. And sexualising their perception of adults is what this mock-reading event was intended to be all about.  We all know that.

As it turned out, disruption was not required. Hardly anyone showed up. The readings, spiritless and unanimated, were poorly received by adults and children alike. The pervasive feeling was one of embarrassment. I even detected a modicum of shame in the way the two bossy female overseers of the event led the drag queens away from their thrones when the event was over.

“I think that went well — not bad numbers, this time, what do you think?”, the one wearing the Dream BIG vest said unconvincingly to the hairiest and more rotund of their Royal Highnesses as they all exited  hurriedly stage left, to no reply.

My calling out the adults involved in this wickedness would only have startled the children who were not yet asleep.

It was difficult to hear all the words that were read. The books themselves were the kind of heritageless pap that infants have had to put up with for a generation or two now in public education: all people are the same, the odd one out is best, be gaudy not modest — you know the kind of thing. One was titled: A Family is a Family is a Family; I don’t have to tell you the storyline. Another of them, naturally, had the word “rainbow” in the title. It was like Play School any time after say 1990, then, with all traces of Christian or native European themes emptied out of the text, save that the stories were read with much deeper and less interesting voices. Other than their readers, there there was nothing overtly gender-bending in the texts, as far as I could hear at least, over the tantrums of one or two of the kinder sitting at the feet of the one with purple horns.

I suppose the organisers made their assessment of what they could get away with, especially after the indefatigable Kirralie Smith started her online petition to have the event cancelled, and decided that getting a pair of trannies to read to toddlers in  a major state-funded children’s festival was subversive enough-for the moment. Penis-tucking and hormone therapy can be introduced to the programme in a couple of years now, with less of a sense of intrusiveness. Long marches can be slow marches, comrades. Be patient.

But in fact the major victories have already been won for the gender warriors in children’s education, and the Liberal State government has been responsible for those, too.

The Safe Schools agenda for promoting “gender diversity” has already been fully implemented by the Education Department of South Australia. That was done in 2016 by the Labour Weatherill government. The Policy document and Procedure document of that Department for dealing with “gender diverse and intersex children”- binding on teachers of all children from pre-school to Year 12- was a triumph for  “Roz” Ward’s La Trobe University avowedly Marxist department. You may recall that Commonwealth funding for the Safe Schools programme was withdrawn by then Education Minister Simon Birmingham (but only reluctantly and under great pressure from Liberal Party conservatives) but the programme survived and thrived in Victoria and South Australia.

After Marshall won the 2018 election the Liberals announced the programme had been scrapped but that is simply not true. All they did was withdraw money that had been given to a group called ShineSA to carry out aspects of the programme. The changes made to the policies and procedures since Labor’s time (it was updated in January 2019) are wholly cosmetic. It is still Safe Schools 101.

The madness of promoting Drag Queen Story Time as part of a children’s arts festival tells us it retains the implicit endorsement of the South Australian Liberal Party. Like its Victorian counterpart, it seems they are addicted to alienating the party’s traditional base and, as a consequence, to single terms of government.

Drag Queen Story Time rules, The Queens In The Hall (to the tune of The Wheels On The Bus) pic.twitter.com/rFN6dI2inz