I consider myself a feminist. But the word “feminist” has become so debased its meaning has been lost, not to mention deliberately distorted from what it was taken to mean in decades gone by. What it meant to me in the Seventies and Eighties, and what it remains today, is equal pay for equal work, equal access to tertiary education and the ability to get a bank loan. It may seem incredible that females once needed the signature of a father or husband but that was indeed the case. Go back a little further and women were generally expected to resign their jobs when they married. Those to whom this sanction was not applied nevertheless received their marching orders upon becoming pregnant. It was unfair, unjust and, sadly, the way things were, which is why it had to change.

I know about the issue of equality between the sexes, which I studied it at university as an elective unit before working for a time in the Office of the Status of Women (OSW) in Canberra. I know all the so-called arguments why women were denied equality and how this imbalance was to be redressed. And I know that some of the prescriptions for redressing inequality were objectionable then and are even more so today. For example, the OSW worked hard to give girls gender-partisan encouragement and advantage in the classrom. A worthy goal, you say, but it came at the cost of boys doing less well. Some 20 years later the results of policies and attitudes overtly favouring female academic performance can be seen in the feminisation of medicine and law. It can also be seen, I would argue, in the declining numbers of young men at universities.

What I hear in modern feminists’ rhetoric is that no longer do these professional women want equality. Rather, they want to be more than equal, having adopted the strange idea that there should be some kind of payback or penalty for past male wrongs — the sins of the fathers being visited upon their sons, so to speak. Your ever-ready-with-a-quote-and-grievance modern feminist want to be compensated for men having had a better a deal than women in the past. The stupidity of this idea manifests itself in the utterances of women who claim to speak for all women when they are the chief recipients and beneficiaries of the attention they demand and attract.  On an individual level, the likes of Germaine Greer and Anne Summers did enormously well out of feminism. It made their careers and, in the case of Greer, a lot of money from sales of The Female Eunuch.

This idea of being “more equal” extends to quotas in the workforce which see second-rate candidates — indeed, in some cases incompetent candidates — employed and promoted ahead of competent men solely by virtue of their gender. Clearly, the merit principle is dead and Australia is much the poorer for that.

This push for affirmative action against men is abhorrent, denying as it does the very idea and principle of gender equality for which women of my generation fought. More than that, it is a philosophy that tilts the playing field in favour of ‘’professional women’’ motivated by self-interest and agendas of personal advancement.

The most pressing issue for true feminists should be the inenviable position of Muslim women, whose value is reckoned to be half the value of men. Why is female genital mutilation so often glossed over? We have clinics for the treatment of mutilated women and girls, yet we see very few prosecutions. Why must women cover their bodies outside the home while men don’t? Sharia law, which derives its authority from the Koran, completely controls woman’s lives. A man can divorce his wife by saying he divorces her three times; a woman does not have this same right. Under sharia a divorced man gets custody of the children, the woman is a non-starter. In Islamic countries a woman must answer to a male guardian who has complete control of what she does. If a woman defies a male guardian he can avenge her disobedience by imprisoning, even killing her. In short, women have no rights and no amount of blathering by token, tame Muslim women about “Islam is the most feminist religions” changes that one bit. 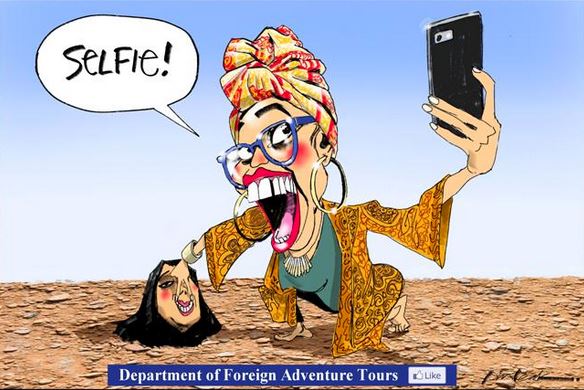 This type of behaviour should not be acceptable in Australia, and there is no way of dressing it up to make it acceptable, especially when women of my generation fought so hard for the freedoms we currently enjoy. That sharia’s misogyny can be tolerated in Australia, even if only by a refusal to acknowledge its pernicious influence on so many thousands of female lives, is a disgrace. What of the gains women made under the first waves of feminism? Weren’t they supposed to apply to all women? Yet today’s alleged feminists say not a word about the injustice that sees a segment of the population trapped in and by the mores of the 7th century. The hypocrisy is blinding, the silence deafening. The same women who take to the opinion pages with vague, aggrieved and subjective complaints about “masculinist air conditioning” or “mansplaining” or “manspreading” do not raise their voices on behalf of Muslim sisters oppressed from birth. The late Bill Leak captured that attitude perfectly (above).

If we go along with the shrill voices of false feminists and keep beating up men and boys, keep ignoring the blatant injustice of consigning women to lives in black sacks, we risk poisoning the well of gender relations for generations to come. Men are now suffering some of the same inequality women of my generation fought against. The early gains should have been a win-win situation. Clearly they were not, there were winners and losers.

Pardon me for being down in the mouth about all this, but it is impossible not to be. I ask myself where the real feminists have gone, but already know the answer. What we see masquerading as feminists are no better than opportunists.