About five years ago, a judge in Victoria’s County Court sighed to a court packed with the bereaved relatives of a chap killed by a drunk driver that he was irked about their victim impact statements being read in public, complaining it would be faster for him to read them in chambers. It is generally assumed by those who haunt the courts that judges view such statements as a waste of their time, but few would say it as brazenly as did this annoyed beak.

I mention this because miffed jurists are making headlines, with one Melbourne magistrate delivering a lecture, and a warning, to burqa-clad spectators who declined to acknowledge the supremacy of the court. That showdown was avoided this morning (Aug 24) when the sack-clad supporters of four Islamic defendants charged with plotting mass murder arrived at the hearing after the magistrate had taken his seat, meaning the obligation to rise was diplomatically avoided.

While this manifestation of the bench’s displeasure will be welcomed by many, especially those dismayed by Islam’s assertion that it will bow its head before none and no one, another recent lecture, this one from Victoria’s Children’s Court, might suggest that while the courts are opposed to burqa-draped defiance in the public gallery, they can be indecently keen to shroud details of cases from the eye and ear of the public whose taxes support our judges in the manner to which they have become lavishly accustomed.

If you believe justice should be done and seen to be done, with details of the legal system’s sausage-making freely and fully reported, the Children’s Court warning that journalists might be jailed for reporting the words of juvenile defendants’ victims should send a chill through all who believe the justice system is there to deliver, well, justice. But more of this outrage in a moment. To understand the mindset that oozes such arrogance, read on.

Most judges understand, sort of, that such statements are the only opportunities in the court process when those affected by crime — indeed, those whose lives have been profoundly changed by crime — have a chance to express their grief and/or anger. Often, such statements are poorly expressed, written by people trying but not quite succeeding in finding the eloquence to fully convey their pain. Few victims of crime are wordsmiths. Their maimed, raped or murdered love ones rarely reside in the sort of well-heeled suburbs where they might have judges for neighbours.

Nor are they likely to have attended school with someone destined for the bench. In Victoria very, very few judges went to state schools. Their welcome-to-the-bench ceremonies are replete with unctuous anecdotes about the time His Honour took on the boarding master or played a practical joke on the cox, but whaddaya know!, that cox went on to have an office up the hall at Owen Dixon Chambers in Melbourne’s wig-infested legal district. I think it was Mark Steyn who remarked that there are few sounds more revolting than lawyers guffawing in court to some lame, clubby witticism made by m’learned friends or from the bench. He wasn’t exaggerating.

Many judges holiday together along the coast, some even live part-time overseas, like the Victorian judge who semi-commutes from Italy. Court breaks coincide with school holidays, and the often cited justice-delayed-is-justice-denied trope seems to be entirely abandoned in January, when the courts shut down while the state’s legal goliaths pursue their various relaxations at Portsea and Lorne.

As befits a court system shamelessly stacked by Labor state governments with mates and party hacks, there are, in fact, a couple of judges who did emerge from the state school system, but that is so rare a distinction it is no more that an outlier’s badge of honour. Say what you like about the tabloid media, but the little papers and foot-in-door television crews are just about the only avenues through which victims get to vent. Judges seem often barely able to conceal their loathing of the popular media, with many appearing to bristle every time they have to mention it.

This brings me to the recent riot-act warning to the press issued by Victoria’s Children’s Court. Authorised and signed by court president Judge Amanda Chambers, it asserts that the victim of a crime committed by an underage offender cannot be quoted by the media, as this might serve to finger the offender which “would or could identify, embarrass or stigmatize a child”.

Here the cynical might wonder at the timing of this epistle, with the congenitally suspicious perhaps speculating that what is, in effect, a ban on victims being quoted might greatly please the government of Premier Daniel Andrews. Melbourne, you see, is in the grip of a crime wave. Jewelry stores are robbed by gangs of hooded youths who seem to operate with near-immunity. Homes are invaded on a nightly basis, honest citizens terrorised and goods stolen. Police cars are rammed by fleeing thugs.

Also worth mentioning: Premier Andrews will face the electorate in 2018, so victims of endemic youth violence being pushed off front pages — if, indeed, they are to be quoted at all — might mesh rather nicely with the inevitable, upcoming campaign pitch asserting that the Garden State is a peaceful, law-abiding, multicultural paradise.

If that is the conclusion to which some readers leapt, set it aside, you cynics. Judge Chambers is the very model of Victorian jurisprudence, a pillar of contemporary probity. Why, she was a colleague of Julia Gillard when they laboured side-by-side in the industrial practice unit at Slater & Gordon, and the former prime minister still thinks the sun shines out of this particular judge’s every orifice! Plus she worked at Maurice Blackburn, where Bill Shorten and a phalanx of other Labor lights also cut their teeth. It is a CV very much apropos of the talent pool from which former state attorney-general Rob Hulls selected the comrades he stacked many deep upon the bench.

In Melbourne just now, people who live in suburbs exalted judges could not find without a GPS are sleeping with baseball bats for protection against midnight marauders. Victoria Police, perhaps preoccupied with leaking information against Public Enemy Pell, sometimes neglects to announce these violent intrusions until the victims have told of their ordeals on the next morning’s talkback radio. Now, if Judge Chambers’ warning is heeded and the push-in miscreants and gem-store bandits are actually apprehended, there will be no public airing of any complaints that victims might make about inadequate sentencing, lax sentencing, political correctness in sentencing, social engineering in sentencing or the glacial pace at which cases proceed through the court system. The courts, as Judge Chambers stresses, have high and exacting standards which reporters are obliged to mirror within their own profession and discipline.

Yet here is the rub: judges often fail their own prescribed standards and sometimes, one suspects, expected standards of sobriety as well. Observant types have noticed one beak who is given to liberal imbibing mid-hearing at a nearby wine bar. Court-corridor scuttlebutt insists another has more or less seen female staff banned from being under him because he, er, tries to get them under him. And let’s not forget the imperious arrogance. One cleaning lady was reduced to tears after a judge went berserk because she threw out some flowers. Another is widely believed among court habitues to have issued a dodgy suppression order as a favour to someone close.

People whose job it is to spend their working days in courts hear these things and know they reverberate with the ring of truth. People who simply underwrite the courts with their taxes don’t hear about them — and now, courtesy of Judge Chambers, the victims of crime are apt to be banished from public eye, ear and knowledge.

While that is not what many would describe as a purpose of the courts, Judge Chambers’ warning left no doubt that she is very serious indeed. 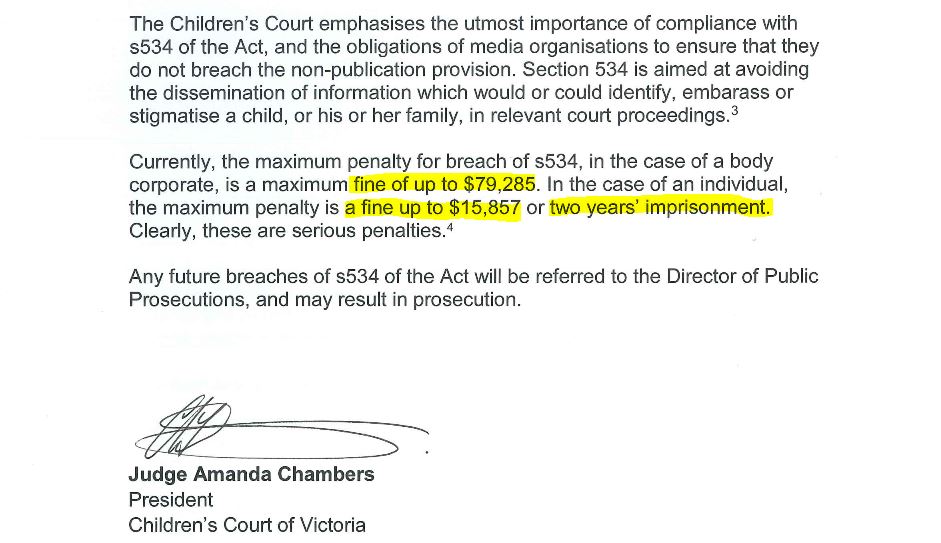 Angus Pike is a professional observer of the courts. He has used a pseudonym because does not wish to see his real name appear on a charge sheet and cannot afford a $15,857 fine