Gays Seeking Attention at any Cost

Views on gay marriage have changed markedly.  Doubtless reflecting the perceptions of the societies that produced them, homosexual relationships are considered an abomination in the Old and New Testaments and the Koran. Homosexuality has remained forbidden in most Muslim countries (punishable by death in extreme cases) but in the West over the past 50 years it became first tolerated then legal.

Even so, many people, and probably most parents, would empathise with Mrs Seinfeld who, on hearing (inaccurate) news that her son was gay, expressed concern while adding “not that there’s anything wrong with it”.  And homosexuality remained until recently the butt of many wisecracks.  In the 1970s one joke had a commentator ten years hence announcing the news that homosexuality has been legalised in Queensland and another responding that it had just been made mandatory in South Australia.

Sponsors favour the more certain route of repeal by a parliamentary vote to one that involves a plebscite. Their claim of opposition to a referendum being based on the $160 million cost is inconsistent, as many of the same people, including Opposition leader Bill Shorten, are simultaneously seeking a referendum on the republic at a similar cost. This is an insubstatntial objection. If cost is such an issue, the question might be put when Australians  go to the polls for the next national election.

Supporters of “marriage equality” cite polls like those below as reflecting public sentiment, therefore no need to put the matter to a plebiscite.  Yet that argument’s salience is low.  It fails to get a mention in the Roy Morgan survey and is not even coded in the Essential survey’s important issues for the government to address, as listed in its August poll: 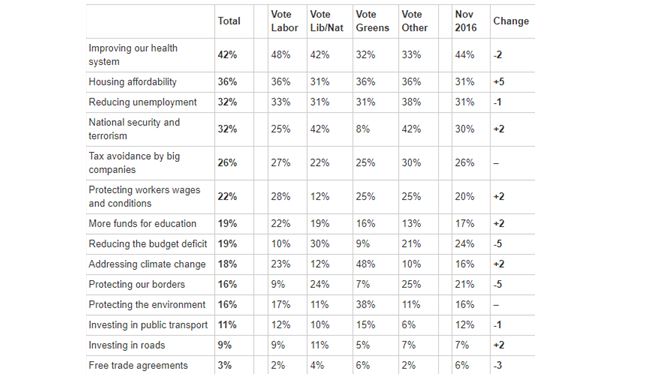 And the outcome of Essential’s poll of June 6 found overwhelmingly in favour of a national vote.

A majority also favoured a plebiscite in the latest Newspoll

The low priority afforded the issue outside activist circles is also reflected in a statement on August 3 by Malcolm Turnbull, “I’ve been here in Western Australia now for three days or so and met hundreds of people,” the Prime Minister said not to long ago, “and only one of them has raised the issue with me.”  (Could that have been Liberal Party same sex marriage campaigner Dean Smith?).  The priority for taking action on same sex marriage is much higher among gay MPs with five Liberals considering forcing a vote and siding with the ALP in support of a Marriage Equality Act.

Across the world, there have been only two countries which have held formal referendums on the issue.

In Ireland opinion polls had 64/18 in favour of gay marriage.  The outcome was 62/38 in favour in 2015 on a 60 per cent voter turnout (meaning only 36 per cent of people actually voted for the proposal).

In Australia population share of those self-identifying as gay comprises 3.4%. Of the 223 Federal parliamentarians rather more than the 7% or 8% statistically expected would be gay.  And those that are, as the current debate demonstrates, feel the issue is far more prominent than is the case with the community in general.

The proportion of same sex couple households is quite small.  The highest shares in Coalition electorates are as follows

Tim Wilson is currently the Parliamentary leader of the same-sex marriage movement, or at least its most public face. He has called for the issue to be settled “once and for all”, though it is unlikely a “No” vote would settle it.  For the time being, presumably having been advised of the gravity of the schism he is creating, Wilson has backed-off on giving interviews on the matter and maintained that other issues are far more important.

Almost all gays consider themselves normal.  As such they have striven, rightly and successfully, to achieve equivalence with their straight counterparts.  Each victory in these regards has been the springboard for a campaign to further erode “discrimination”.

Doubtless the current activists are being honest in claiming they only want equality and would not force those with religious convictions to fully suppress these if they were in conflict.  But the same limited aims were made by those that sought de jure legality.  And while it is unlikely the gay rights movement would prevail over Islamic preferences, any remaining Christians and Jews sticking to Biblical injunctions would be easily overcome.

In this respect, nothing is more certain than that, following a Marriage Equality Act, future demands will be made on the wedding cake manufacturers and wedding celebrants to, on pain of legal action, also supply gay couples.  And this goes back to the passionate desire for gay people to be regarded in every respect as equally normal to straight people.

One of the many institutional promoters of the gay rights cause is a captured educational establishment with, for example, the Safe Schools program encouraging more children to adopt what its gay-friendly promoters consider their latent homosexual leanings, thereby expanding the size of the minority. This renders, as a wry sardonic comment, the previously mentioned 1980s joke about South Australia in future requiring homosexual practices to be mandatory.

Opinion Polls notwithstanding, given Australia’s federal nature, the success of a plebiscite is not assured, given many voters  hide from pollsters their real views on trendy social issues.  Many Liberal politicians campaigning for a parliamentary vote recognise this, understand the relative unimportance of the issue to their constituents, and recognise the divisive nature of their campaign.

Their persistence in pursuing a pet cause at a time when the government of which they are part is on the ropes and sagging badly in the polls is little short of astonishing.

Alan Moran is the author of  “Climate Change: Treaties and policies in the Trump era”

The Death Throes of Common Decency

This Can’t Go On Much Longer