At the end of a tumultuous week in Australian politics, Malcolm Turnbull burnished his developing reputation as the smartest man in any room, even a a moderately large one, by taking to the pages of Nation Review with an excoriation of Sir John Kerr, a tear for Gough Whitlam and the earnest prediction that Australians would rally in their droves to the banner of a PM unjustly ousted. Gough is gone and Nation Review too, but not the author of the remarkable essay reproduced below.

Observant readers of the Vice-Regal columns of the Sydney Morning Herald would have seen the writing on the wall for Gough Whitlam when they read on Tuesday morning that, on Monday, Sir John Kerr had met and lunched with Sir Garfield Barwick. I doubt that Kerr considered that by dismissing Whitlam he has condemned himself to an eternity in the history books, portrayed as a villain. He will be seen as a more despicable version of Philip Game, who dismissed the elected government of NSW Premier Jack Lang in 1932.

With equal justice, or injustice, Whitlatm has been elevated to the status of a political martyr. No matter what may happen to him in the coming elections, he is assured of the foremost place in the hagiography of Australian Labor.

When Sir Philip Game dismissed Jack Lang it was only after months of near-chaos in the state with a large private army, The New Guard, threatening to destroy the Lang administration by force; with the state treasury ganisheed by the commonwealth and protected by guards of timber workers. Public servants were being paid in cash. For all intents and purposes the state of NSW was stone motherless broke.

Yet Game’s dismissal of Lang, who still had a large majority in the Legislative Assembly, has been condemned by almost every legal writer on the matter. It hasn’t been denied that Game had the power to dismiss Lang. But, rather, that his decision was based on correct grounds. In Lang’s case it was based on the supposed illegality of a state government circular which had never been challenged or considered in the courts. In short, Game’s act had not, despite the terrible conditions of the day, been an act of last resort.

“…public opinion has been moving steadily in favor of the Labor Party. Unless Australians are unusually confident in vice-regal wisdom it is likely that the dismissal will provoke even more support for the Labor Party.”

Kerr’s act was equally not an act of last resort. Assuming that his most fundamental concern was to preserve the traditions and functions of parliamentary democracy, he had a number of other options he could have exercised before he dismissed Whitlam. The first and most important was the possibility of him publicly asking the Senate to pass the Supply bills. Given the hesitation of some Opposition senators, there could
be little doubt that Such a vice-regal plea would have swung the waverers and passed the bills. Kerr may have considered such a course unsatisfactory — it involved his stepping right into the centre of the political arena — but if the good Sir John can really believe that his dismissal of the PM is less of a public intervention than a request to the senate would have been, his capacity for fine legal distinction is almost unbelievable.

Another option that Kerr should have explored before he dismissed the prime minister was to tell Whitlam that there had to be an election and give him the choice of going into it as prime minister or as leader of the Opposition. Whether or not Kerr was obliged to do that constitutionally, and I believe he was, the dictates of common courtesy alone would have made it proper.

When Game sacked Lang he did so only after public opinion had swung almost entirely against the Lang government. Consequently, Game’s action was vindicated in political terms by the landslide victory of the anti-Labor forces at the resulting election.

Kerr is in an entirely different situation to Game. Here public opinion has been moving steadily in favor of the Labor Party. Unless Australians are unusually confident in vice-regal wisdom it is likely that the dismissal will provoke even more support for the Labor Party. 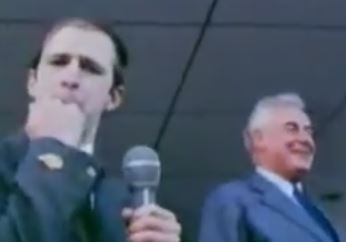 The wide discretionary powers of the Governor-General must be regularised. It would be absurd to expect a Governor-General to exercise more integrity over constitutional niceties than the politicians do. Sir John Kerr,like sir Philip Game, has shown that we cannot allow so much power to be vested in an unelected official who spends most of his days attending dinners. Not even the US president can dissolve Congress.

Another matter is that of who advises the Governor-General. The practice has been that the GG acts on the advice of his ministers. However, it is quite clear that Kerr has sacked the Prime Minister contrary to the advice of his ministers and after seeking the advice of the Chief Justice. It is worth noting that, in 1932, Game had sought the advice of Sir Philip Street. the then-Chief Justice of NSW. Once again, can this unelected ribbon-cutter be permitted to act on the advice of people other than the elected government? Clearly, if we are to persist with the office of Governor-General, his ability to consult those other than the ministry must also be abolished by amendments to the royal instructions.

The royal instructions, for the uninitiated, are the instructions the Queen gives the Governor-General on his appointment. They are not enforcable, and if a Governor-General chose to disobey them he could not be challenged in the courts. He would almost certainly be dismissed.

The royal instructions to the Governor-General don’t even envisage him acting contrary to the advice of his ministers. Although there is no section in them saying that he must do what the prime minister advises, that is the general implication of the document read as a whole. The royal instructions to the state governors, however, in Article VI specifically state that a governor can disagree with his ministers and act accordingly. Any such disagreement must be reported to the Queen immediately. It was in pursuance of this Article VI that Game acted when he sacked Lang.