Peter Ryan, who Quadrant readers have known as their favourite acerbic essayist since March 1994, died in Melbourne on Sunday morning. One of the last of the post-war generation of Melbourne intelligentsia, he was ninety-two.

Peter Allen Ryan was born in Melbourne on September 4, 1923. One grandfather was an Irish Catholic suburban tailor and the other a Methodist lay preacher. His father, a public servant, First World War veteran and one-time Victorian Football League footballer, died when Peter was thirteen; the death left a lasting pain.

The Second World War plucked him at eighteen from the ranks of junior clerks in the Victorian public service into an intelligence role behind the lines of Japanese-occupied Papua New Guinea, which became the subject of his first (and recently republished) book Fear Drives My Feet. The extremely arduous work led to him later in the war to teaching elementary Papua New Guinea language to young servicemen in Canberra and a place in Alf Conlon’s Directorate of Research and Civil Affairs. 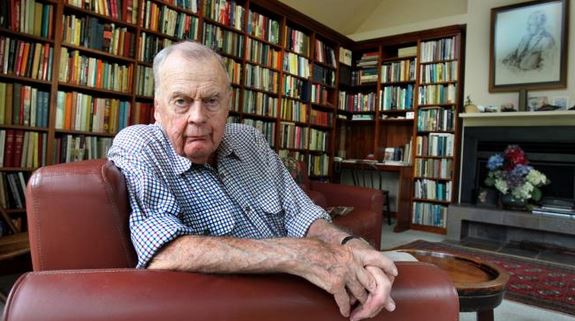 Still only twenty-one when the war ended, he joined the many talented ex-servicemen studying at Melbourne University. He was active in the Labor Club, where his battles against communist takeover attempts confirmed him in anti-communist views, which gradually became more conservative.

As many have found before and since, arts degrees do not automatically produce an income and Peter spent the next few years in advertising, mini-scale publishing and in public relations for ICI Australia and New Zealand. Lady luck struck in 1962 when Melbourne University Press, looking for an innovator, appointed him as Publisher. He published many important and successful books before he retired in 1989. He wrote about these years in his book Final Proof (2010). He later worked for the Board of Examiners for the Victorian Supreme Court until the early 2000s.

The controversy of which he was proudest was his attack in Quadrant in 1993 on the quality of Manning Clark’s much publicised six-volume History of Australia, one of MUP’s best-sellers. Clark already had commitment from MUP for the series when Peter took over and he confessed that he did not feel especially proud of the later volumes.

Peter’s gift for friendship led him to journalist and author Clive Turnbull, one of many friends older than himself, who introduced Peter to the chummy ranks of the intelligentsia and sometimes bohemia of Melbourne. Turnbull was one of Keith Murdoch’s 1930s “bright young men” in the Melbourne Herald group and a post-war “man about Melbourne”.

Friendship with wartime diplomat and later Professor W. Macmahon Ball helped him land the MUP job. Sir Paul Hasluck, Governor-General from 1969 to 1974, was another friend, dating back to wartime Canberra. Bob Santamaria was yet another of his eclectic band; they often lunched at the old Café Latin. The historian Geoffrey Blainey was another. In his book Brief Lives (2004) Peter celebrated the lives of fifteen of his friends—fourteen Australians and one New Guinean, from a prime minister and a Nobel laureate to a wood-cutter and a doorman—and his friendships with them.

Peter’s early columns included the mischievously witty “Melbourne Spy” in the fortnightly Nation, published by Sydney Morning Herald finance editor Tom Fitzgerald, yet another Ryan mate. The Australian and the Age were other publishers over the years of Peter’s witty, incisive and erudite columns and articles. His Quadrant column was the pride and joy of his last years. In the weeks before he died he was sharpening his pen for use in Quadrant on Peter FitzSimons. Peter did not think much of FitzSimons’s military history or his republicanism.

Peter had the good fortune of a long and happy marriage lasting nearly seven decades. He married Gladys (“Davey”) Davidson in 1947. They had a son and a daughter.

In accordance with Peter’s wishes, there will be a private cremation.

London Diary of a Brexiteer