Israel and the Media’s Tunnel Vision

Long ago, spotty cadets would be summoned to the basement auditorium of the old Herald & Weekly Times building in Melbourne for weekly lectures by the newsroom silverback saddled with the chore of infusing the latest generation of young journalists with the tenets of our chosen craft. There was plenty of good advice, not least to hit the clips before putting pen to paper. Readers often know more about various subjects than those who report them, we were told, so backgrounding yourself is an essential precaution for reporters who don’t wish to appear dim, gullible, partisan or eager to be duped.

In between packing my bag for Israel and arranging for a neighbour to feed the cat, I did just that last week, downloading reams of dispatches from earlier visitors to the Middle East. Last night, as the midnight silence of a balmy evening in Jerusalem was interrupted by the mercifully distant pop-pop-pops of interceptor missiles bringing down the latest brace of rockets out of Gaza, these words from 2010 came immediately to mind:

“Ms Jaouadi, who was deported from Israel in 2008, rejected a suggestion that the flotilla would be construed as support for terrorism because Gaza remains under the control of Hamas. Instead, she argued that MPs and others on board “had to see how hard it is to get a bag of cement to build a school, so that kids can be educated; and to fix a hospital, so that mothers don’t have to have their babies in tents.”

The words are those of Fairfax Media’s intrepid Paul McGeough, who was aboard one of the ships in the rust-bucket fleet organised by Turkish fundamentalists, their stated purpose to bring the succour of love and humanitarian supplies to the oppressed and penniless Palestinians of Gaza. Israel took a dim view of the voyagers and, as McGeough put it, their navy “hunted like hyenas” while helicopters lowered commandoes onto the lead vessel, on which a pitch battle left nine dead.

How could those beastly Jews do such a thing, resort to violence in order to stop Palestinian mums having their babies in nice hospitals, their kids educated in adequate schools? That was the subtext of McGeough’s reports, which were replete with poor-me quotes from his Turkish hosts, not to mention incidental illustrations of Israeli indifference to human decency. Sydney Morning Herald readers were left in no doubt, for example, that the commandoes dropped quite deliberately from the sky at the precise moment the reporter’s peace-loving fellow travellers were attending to their morning prayers. McGeough went on to collect a Walkley Award, which recognises exemplary writing and reporting by a union member (see note below), for Best News Report. His partner, a Palestinian “peace activist”, must have cheered lustily as he added another adornment to their mantelpiece, and she would have been even more gratified when the Walkley people declined to re-examine their decision after protests from Australian Jews and others who noted numerous discrepancies between the SMH account and the official Israeli investigation conducted by a judge of that nation’s Supreme Court.

McGeough was deported after two days in an Israeli jail, so was ineligible to be lounging in last night’s moonlight on the terrace of the King David Hotel, where the Israeli-Arab waiters were filling and re-filling the snifters of those waiting and watching for the next round of Hamas’ fireworks. It’s a pity he wasn’t here, as he might have learnt (although his readers almost most certainly would not) why Gaza’s mums endure their labour pains under canvas, rather than in the hospitals that he reported as being the intended end use for those 500 tonnes of cement his victimised flotilla was said to be hauling.

Gaza, you see, is a sandy plot and relatively easy to mine with tunnels, which Hamas has done to an extraordinary degree. Coming as they do from spokesmen for the Zionist Entity, McGeough would probably raise an eyebrow at official claims the Gazans have installed more than 1600 tunnels, subterranean arsenals, rocket factories, command posts and barracks for their fighters, some as  deep as 60 metres beneath the surface.  Trouble is, gravity would see the Gazan sands re-fill those spaces in an instant were it not for the vast quantities of cement required to support their ceilings. According to, again, Israeli officials, a typical tunnel requires some 700 tonnes of cement. Some of the larger underground works are said to be enough to accommodate cars which, if true, makes you wonder how many hospitals and schools might have been constructed if all that clandestine spadework, not to mention the ingenuity that has produced homemade, pedal-powered gougers, had been put to good use above ground.

Instead the Gazans ended up with rockets, lots of them – and these have been sent off to Israel, pointy-end first, by the hundreds. As of now, the tally stands at well over a thousand. As instruments of slaughter they have not been terribly effective, killing only one Israeli and injuring perhaps a score of others. This was to be expected, given that all lack guidance systems and many, especially those built on-site rather smuggled in from Egypt, are propelled by volatile compounds mixed and loaded in what amount to ad hoc underground kitchens. But then dead Jews are not the only measure of a military campaign’s success; indeed, for all sorts of other reasons, the toll in the lives of nearby kibbutzim and those city dwellers to the north, where the larger rockets are ambitiously aimed, is beside the point, which has been to win space and sympathy in the Arabic local media and, further afield, the pages of publications like, well, Paul McGeough’s very own Sydney Morning Herald.

First, there is that sympathy factor – Zionist “hyenas”, anyone? – and if dead Palestinians, of which there are said to be well over 1000 as a consequence of the ongoing Gaza incursion, then PhotoShop and threats to reporters can work wonders. Consider, for example, the illustration below, which has been circulating courtesy of Hamas’ social-media operatives and supporters. It is gory and stomach-turning and really quite appalling, but do make the effort to keep down your breakfast because it is not what the caption purports: 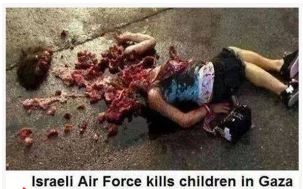 Now watch this clip, which explains the image’s provenance and one use to which it has been put:

If your browser won’t load YouTube offerings or you don’t have the time to watch, know that the “dead child” is a stage prop from Hollywood gore-fest Final Destination IV. As an example of media manipulation it is crude but, for those eager to be convinced of Israeli iniquity, more than adequate. Those with a taste for the grotesque can find further examples at Palestinian Media Watch.

Second, there is the proof of the adage that war is politics by other means. Several months ago, before the zealots of Hamas-controlled Gaza began their daily deluge of rockets into Israel, the polls suggested that rival faction Fatah held a commanding lead in public support and would most likely emerge from the upcoming elections as the chosen representative of the Palestinians in both Gaza and the West Bank. The rockets and Israel’s response changed that. While Gazans have not seen those promised schools and hospitals, conflict does have a tendency to solidify support, which is precisely what has happened. As of the latest samplings, Hamas is now ahead of Fatah, with which it has fought repeatedly, and it is the favourite on current reckoning to triumph at the ballot box. So much ground has Hamas made up that Fatah has been distributing flyers depicting its fighters, in their green headbands, shaking hands with Hamas counterparts, identifiable by the preference for yellow headgear. If you can’t beat ’em, join ’em, as the ancient wisdom says.

Why should it matter, given that both parties make no secret, at least in their own media, of their enmity to Israel and shared desire to see Jews driven into the sea?

Well, after the recent coup in Egypt that ousted the Muslim Brotherhood, the tunnels that had been bringing in rockets (and food and fuel and all the other commodities whose re-sale enriched Hamas’ senior brass and hangers-on) were sealed. With that underground conduit crimped first to a trickle and now shut down altogether, Hamas’ future and its leaders’ meal tickets depend on an electoral victory. So far, so good – allowing that the polls are correct.

Third, money again. There is nothing like a picture of a dead baby (or a plastic Hollywood zombie) to raise international ire and immediate donations. Fatah had stopped the flow of international donations it receives on behalf of all Palestinians from going to Hamas, putting some 70,000 Gazans out of work. Now there has been a fresh pulse of cash, including Australian dollars , the latest infusion being $5 million just announced by Foreign Minister Julie Bishop. It is said that the money will be dispersed through reputable, straight-arrow aid organisations, but given that one of those agents for Australian largesse is the UN, well, one has to wonder.

It has been a relatively quiet day in Jerusulem, the sound of warning sirens no more than a couple of times over the honey-blond sandstone that makes the city’s ancient quarters so appealing in the long light of the late-afternoon sun. It is quiet, too, in the restaurants and at a bar near the Jaffa Gate run by Jews who serve, amongst their other drops, the crisp and excellent Taybeh lager, which is brewed in Ramallah on the West Bank and guaranteed to cut the dust of a parched visitor’s throat. Business was terrible, the proprietor lamented, but it had been terrible in the past as well, he acknowledged, when war and rumours of war also cut off the tourist trade. So he was used to that, and it was not his chief concern.

A lot of Israeli sons and daughters are in Gaza and, so far, something like sixty will be coming home in body bags. Many, many Palestinians are already in their shrouds, and many, many more will follow. Not that the former of those figures would interest the marchers who turned out in Melbourne, Sydney and other cities to show their support for Palestine and, perhaps unknowingly, the kleptocrats who have found conflict so much more profitable than peace.

McGeough might write a piece about all of them one day and the Sydney Morning Herald might even publish it, allowing that the paper has not gone out of business by then.  Just don’t do what the Israelis do at the sound of sirens: don’t hold your breath.

Note: The Walkley Awards are open to non-union members; they just have to cough up $200 per entry in order to be judged by panels that have included the likes of Phillip Adams, Margo Kingston and, yes, Paul McGeough.

Roger Franklin, the editor of Quadrant Online, is in Israel as a guest of the Australia-Israel-UK Leadership Dialogue. If you think that makes any difference to his reporting and sympathies, well, Paul McGeough’s perspective is probably more to your taste.

One thought on “Israel and the Media’s Tunnel Vision”

Nagging as a Feminist Discipline