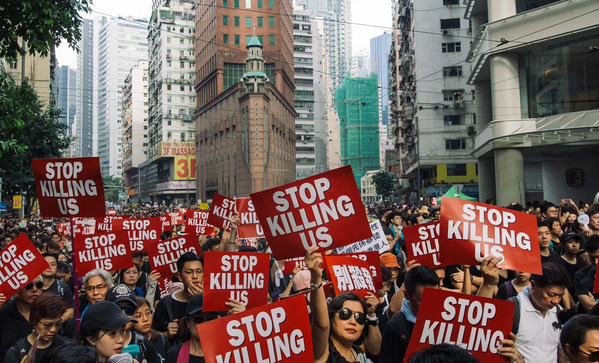 The results of Hong Kong’s local elections, which saw an overwhelming victory for the pro-democracy candidates and humiliation for Beijing, should raise questions about the accepted wisdom which propounds the inevitable rise of China and the relative decline of the United States.

Beijing might have hoped that the one country, two systems would produce over time a kind of practical convergence. Back in 2015, 1.4 million votes saw pro-Beijing candidates sweep all 18 district councils in Hong Kong. Now, with 2.9 million votes, pro-democracy candidates have won 17 out of 18 district councils. The Chinese Communist leadership was hoping the disorder in Hong Kong would produce a backlash. Their hopes were dashed, raising profound doubts about not only the future of Hong Kong, but also that of the Xi regime in Beijing.

It is easy to argue that Beijing can and will snuff out Hong Kong freedom when it chooses. Yet waging war against a decentralised pro-democracy movement in full view of the rest of the world will produce huge self-destructive costs for the Communist regime. Of course, a decentralised movement facilitates infiltration by pro-Beijing agents who promote gratuitous acts of violence and property destruction in order to discredit the movement. So far, such attempts to discredit the protests have utterly failed. On the other hand, the absence of any leadership hierarchy frustrates the efforts of a twentieth century totalitarian regime to deal with a twenty first century phenomenon. In an age of increased facilitation of information flow, the notion that Beijing can use technology to create a safe space for itself seems illusory over time.

On a broader front, one of the least appreciated aspects of twentieth century history is the inherent instability of totalitarian regimes. The common denominator  of both the Nazi and Soviet regimes was that opportunity for expansion and plunder was essential for survival. For example, Hitler seized Czech gold and Stalin snatches entire industrial plants from East Germany. The point is that both Hitler and Stalin got lucky. Containment would have doomed both regimes sooner.

There is much loose talk about the inevitable rise of China. In part, this is based on a realistic appreciation of the vast economic progress over the last four decades. Yet, there is a persisting notion that displays of totalitarian power is a sign of superior efficiency. Added to this is the idea that China’s prosperity was the product of a wise and all-knowing regime which is superior to the messy democracies of the West.

I would suggest that a rather more prosaic answer  lies in the shift from Maoist totalitarianism to an authoritarian regime, inaugurated by Deng Xiaoping. We might say that this dispensation, which had persisted until the rise of Xi Jinping, emphasised stability and predictability. Within this authoritarian dispensation were implicit boundaries and spaces which allowed an informal acknowledgement of private property and limited toleration of religious minorities, including Christianity. As the Tiananmen Square massacre of 1989 demonstrated so tragically, the boundaries were always fragile.

No Marxist-Leninist regime could explicitly enshrine property rights and minority rights under the rule of law. Following this transitional authoritarianism, the present paramount leader for life, Xi Jinping is reverting to the old totalitarianism. Like Stalin, Hitler and Mao, Xi seeks to resurrect the essential lawlessness and instability of twentieth century totalitarianism. Maybe, China’s four decades of growth was an elongated version of Lenin’s New Economic Policy.

Perhaps the record capital flight out of China,  accompanied by the mass incarceration of   the Uighur Muslim minority, and the increased persecution of Christians may be a portent of regime failure — and an end to a popular myth.

The noxious weeds in our food bowl

The Pell Case: What It Says, Where It’s Going