I was at a Liberal-aligned fundraiser on the night of the North Sydney by-election. The mood of the crowd was light, but it had absolutely nothing to do with Trent Zimmerman’s impending victory. In fact, I was considered one of the more moderate members of our company, only because I didn’t want to disembowel Malcolm Turnbull and strangle him with his own entrails. Yes, it was a decidedly pro-Abbott crowd. Yes, Abbott loyalists in the Liberal Party do exist, despite their semi-mythological status alongside Republicans who actually thought Mitt Romney would make a solid presidential candidate in 2012 (I was one of the latter, as it happens.) And I honestly don’t think anyone there would’ve been too cut if Zimmerman lost.

The fact is that conservative Liberals have developed this fascinatingly Bushido-esque suicidal tendency: they’d rather the Party they love be destroyed than watch it drag on as a bastion of centrism. When I read aloud a text message saying Zimmerman had won, a chorus of drunken right-wingers jovially rejoined, “Who the f—k cares?”

I couldn’t help but agree. I’m not a Liberal, and I couldn’t give two licks about Liberal Party internal affairs. So the inevitable Zimmerman ascendency didn’t irk me on any factional grounds. It just struck me as a travesty of true democracy.

Zimmerman’s Wikipedia page is the most boring and predictable chronicle of hackery you’ll ever come across and wish you hadn’t: President of the NSW Young Liberals, North Sydney Councilor, advisor to Shadow Treasurer Joe Hockey, and so on. How the hell does that qualify anyone to be an MP? What can Trent Zimmerman claim to have really done with his life, except climb the greasy poll of the Liberal Party’s Left faction?

Sure, that’s how the Westminster system works sometimes. Professional hacks do what they do in the hopes of someday attaining the heights of power they help secure in their lower stations for others; the whole machine functions only if the rewards occasionally pan out. “Maybe if I spend my days doing nothing but letter-boxing and branch-stacking, I could be an MP someday!” the young operators coo. “Hell, it worked for Trent Zimmerman!” So we can notch that up on Trent’s list of accomplishments: encouraging hundreds of burgeoning career politicians across the country. Thanks, mate.

But the fact is that Zimmerman was hugely unpopular with many North Sydney voters. Accusations of a stitch-up abounded during the pre-selection process, with devious strategems employed to exclude pre-selectors who might have supported other candidates. Then came the 13+% swing against the Libs on election day, an absolutely appalling result in a blue ribbon seat Labor didn’t even contest. It is safe to assume local party members who protested the shenanigans — pictured below — were not surprised. 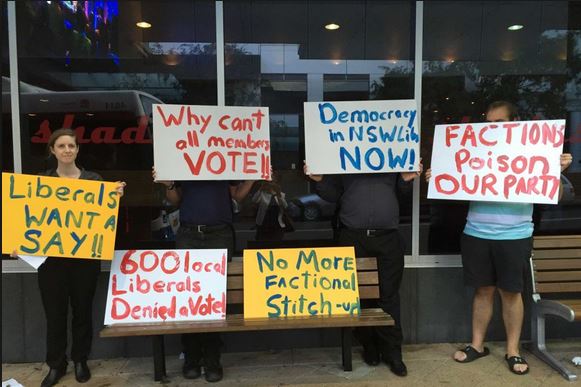 Certain right-wing commentators, and virtually all of their left-wing counterparts, have trumpeted the swing against the Libs as a sign of Turnbull’s fading honeymoon. That might be part of it. But regardless of who the PM is, how on God’s earth did the Liberal Party’s bosses expect North Sydney voters — among the most loyal in the country — to react to their seat being used as a reward for devoted service to a faction?

Methinks the media underestimates average Australians. Whatever party they support, Aussies aren’t  Machiavellians. They don’t relish backroom deals and head-kicking as much as us journalists do. They like good government and solid representatives. They like to feel that, when they show good faith to one party or another, they’ll be rewarded with candidates to make them proud. I went to a Warringah Liberals Christmas Party this year, and the merry makers were bursting with appreciation for Tony Abbott. When he took the stage to give a very gracious, conciliatory address, the applause and cheers were deafening. He had represented them well, and despite his ouster they couldn’t have been more pleased to call him their local member.

By the same token, when I picked up a copy of the Wentworth Courier the day after Turnbull ousted Abbott, the headline was really quite touching: “Don’t forget about us, Malcolm!” Wentworth voters love Turnbull. Through his ups and downs, that electorate’s voters also have been exceedingly proud to call him their representative. We might even forget that, some years back, Joe Hockey was one of the most popular Coalition MPs, and it was only a single vote in the party room that foiled his leadership ambitions.

Did the Liberal Party deliver that same quality of candidate in Trent Zimmerman? No. It didn’t even try. The party foisted a hardcore lackey on the electorate and smugly assumed it would give him the dutiful rubber stamp.

I can understand why some Liberals wish the vote had gone otherwise. We’re going to see the same swing against Liberal candidates in safe seats every time they’re pre-selected solely on their merits as hacks (especially when the ascent of the unworthy is by despicable means)  It’s a dangerous game the Libs are playing, and it’s going to work right into the hands of Labor, the Greens, and minor parties. What’s worse, it’s going to create a culture that routinely and systematically abuses the party faithful’s base.

For the sake of center-right government, and for the sake of democracy, let’s pray there are no more Trent Zimmermans waiting under the table for their masters’ scraps, and no more indulgent masters.