A Family Business in Assassins’ Brains

Of the four US presidential assassins, neither the first (John Wilkes Booth) nor the fourth (Lee Harvey Oswald) went to trial. After shooting Lincoln, Booth was killed while on the run. Oswald was shot by Jack Ruby in the first televised killing. The middle two, the assassins of James Garfield (Charles Julius Guiteau) and William McKinley (Leon Franz Czolgosz), were sent to trial and executed. There is an unusual connection in these judicial events, separated by 20 years. At the first trial, a father – Edward Charles Spitzka (1852–1914) was an expert witness; then his son – Edward Anthony Spitzka – did the autopsy after the second trial, surely a unique event in forensic history. There may have been a curse brought on by their work as both died prematurely. These two interesting participants in the world of assassinology deserve a look.

President Garfield was shot in the back by Charles Julius Guiteau at the Baltimore and Potomac train station in Washington on 2 July in 1881. Garfield failed to recover and, largely thanks to incessant meddling in the bullet wound by his doctors, died on 19 September 1881.

Spitzka senior trained in neurology with the best specialists in the world in Germany and Austria. Returning to New York in 1876, he set up in practice to treat diseases of the nervous system. No shrinking violet, he was described as arrogant, opinionated, dominating, ‘a red-headed, hot-headed man’ and scornful of American work – but a doctor of intellectual depth.

Spitzka considered himself an alienist, the name for those who gave evidence on mental disorders in legal proceedings. A mere 29 years old, it is an indication of his prestige that Spitzka was asked to be an expert witness by both the prosecution and defence, eventually to appear ‘unwillingly’ for the latter. Typical of his radiant confidence, he wrote an article that Guiteau was insane before actually meeting him. His examination of him the day before testimony did not lead to any change in these views. Guiteau’s family history of mental problems, seeming lack of moral character, and his ‘lop-sided smile, a characteristic feature in primary monomaniacs’. Monomania is a useful and sadly missed term in modern psychiatric parlance.

Undaunted by the prosecutors, he engaged in a spirited debate to assert that Guiteau was not sane when he shot Garfield, based on his personal examination of the prisoner, the only expert witness to do so. In characteristic mode, he was uncowed by cross-examination and gave back as much as he got. Asked if he was in fact a veterinary surgeon, he responded, “In the sense that I treat asses who ask me stupid questions, I am.”  Would that forensic witnesses could get away with this in court now. Making sure he did not miss anything, Spitzka added that there was a morbid mind, a congenital malformation of the brain, and a diseased depravity.

It is now accepted that Guiteau had an organic brain disease. There was left-sided weakness of the facial muscles, weakness of the muscles in one eye and deviation of the tongue to the left when protruded. In addition, there was ataxia, an exaggerated patellar reflex, unequal pupils and fibrillar twitching of the tongue. To confuse (or confirm?) these findings, he also had syphilis and malaria.

Not holding back, Spitzka said these symptoms confirmed that Guiteau was a moral monstrosity with a defective and ‘imperfect’ brain.

Indications of Guiteau’s mental state were several: an attempt to kill his sister with a hatchet, the belief that he should be appointed counsel to Paris, and that the ‘removal’ of Garfield was ordained by God. He also argued – quite correctly, as it turned out – that the doctors’ bungled treatment was actually responsible for Garfield’s death.

Despite the spirited defence, Guiteau was found guilty and hanged on 30 June 1882. At autopsy, the brain appeared normal, although there was thinning of the cortex. The brainstem (from which the cranial nerve signs arose) was not examined. 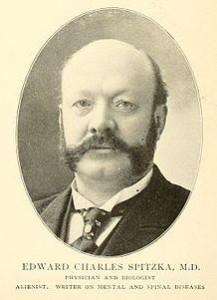 Edward Charles Spitzka (left) published widely and is credited with a number of original discoveries. He was a co-founder of the American Anthropometric Society (AAS), an organisation devoted to collect and study the brains of notable individuals on the belief that this would reveal why its owner was a great scientist, writer, statesman, social misfit or murderer. Among the brains in their small collection were those of physician William Osler and poet Walt Whitman.

He gained prestigious appointments, received many honours and wrote an important 1883 textbook on insanity which included an illustration of an individual with ‘the insane expression…of monomania of persecution’ bearing a distinct resemblance to Guiteau. He added, with characteristic conviction, in a footnote, ‘If ever a more consistent record of the insane manner, insane behaviour, and insane language has been made anywhere else in the history of forensic psychology than in the Guiteau trial, the writer does not know of it.’

Spitzka’s next foray in forensic history occurred when William Kemmler, after murdering his wife with a hatchet, was sentenced to death by electrocution in New York’s Auburn Prison on 6 August, 1890, the first execution using the new electric chair. Invited to witness, Spitzka became an active participant in the event. When the switch was pulled, observers were horrified to see that Kemmler was still alive and Spitzka implored the warden to attach the electrodes again. It took at least a minute before death occurred, leaving an acrid smell. Spitzka, who did the autopsy, told a reporter that the method of execution was a failure, but this did not deter the US from continuing to use this horrendous method of capital punishment.

Spitzka’s writing stopped after 1903 when he developed cancer of the jaw, struggling on until his death in 1914 at the age of 61. He donated his brain and body to the AAS for further study.

On 6 September, 1901, President McKinley was shot in the abdomen while standing in a reception line in the Hall of Music at the Pan-American Exposition in Buffalo, New York by Leon Franz Czolgosz. McKinley died on 14 September, 1901.

Edward Anthony, Spitzka junior, qualified in medicine in 1902. By then he had accomplished something unique for a medical student. In the last year of his medical course he was selected to do the autopsy on Leon Czolgosz.

How did this come about? Spitzka junior had an early interest in brain anatomy which stemmed from his father’s work in neurology. His status as something of a prodigy is indicated by presenting four papers in his third year of medical school at the December, 1900, meeting of the Association of American Anatomists. This was followed by eight papers published between January and August 1901. In early 1901 he requested permission to study the brains in the AAS collection. His father’s reputation as a leading neurologist did no harm either.

A major participant in the case stated, “In view of its great importance both to medical science and to medical jurisprudence, the writer regards it as fortunate that the State was able to secure the services of so able a brain anatomist and skilled operator and draughtsman as Mr Spitzka to make the post-mortem examination.”

The trial started on 23 September, 1901, a mere nine days after McKinley’s death.  The entire process, from jury selection to verdict, took only 8.5 hours over two days. The two defence attorneys made it clear that they did not wish to be there and made the most limited, cursory response for their client. No witnesses were called – not even the two doctors who had examined the defendant – and Czolgosz did not testify on his own behalf.

The guilty verdict delivered, Czolgosz was electrocuted after 7am on 29 October, 1901. His eldest brother wanted the body effectively destroyed to deter further investigations, so the only opportunity to examine the brain was in the few hours available before the burial. Spitzka’s autopsy was finished by 12:30pm. Although conducted on the entire body, it centred on the brain.

The brain appeared entirely normal although the precentorial fissure of the right hemisphere was continuous with the Sylvian fissure –  a condition encountered in 40% of Polish brains, an example of the racial profiling that was common then. Picking up on his father’s work, Spitzka added that the small haemorrhages so characteristic of the brains of electrocuted criminals were lacking. He concluded that Czolgosz was in excellent health at the time of his death which no doubt would have been of some consolation to the late assassin.

Spitzka’s findings on Czolgosz’ brain was published simultaneously in six journals, an indication of the intense interest in criminal brains. There was no marked evidence of arrested development and ‘…nothing has been found in the brain of this assassin that would condone his crime for the reason of mental disease due to intrinsic cerebral defect…’ Spitzka made the prescient statement that some psychoses may be chemically based, a remarkable anticipation of current views on psychiatric disorder.

Edward Anthony Spitzka (right) went from medical student to professor and chair in four years, having a distinguished career in brain anatomy, gaining 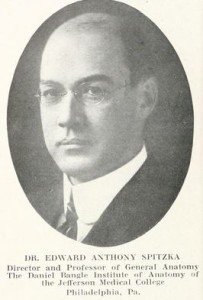 important positions and editing editions of Gray’s Anatomy. Following his father’s path, he did the only detailed analysis of the brains collected by the AAS and examined the brains of criminals executed by electrocution to see how electrical current affected the tissue and for features to account for their criminal behaviour. This did not endear him to the criminal community and led to occasional death threats, a recurring hazard of forensic work.

The pressures of the job and academic turf wars, to say nothing of the threats, did not encourage the best state of mind. He became paranoid, drank heavily and turned up for a lecture carrying two pistols (although it can be argued that this is more than some audiences deserve). In 1912 he was given leave from Jefferson Medical College, resigning in 1914.

Spitzka junior’s high-flying academic career, lasting 11 years from graduation, was over. He was able to serve in the US forces from 1917 to 1919 and do some private practice before dying of a cerebral haemorrhage in 1922. On that note, the last of the Spitzkas leaves the history of neurology and forensics.

One theme courses through this story. Degeneration theory had a crude and simplistic focus on the brain: Great and brilliant men had bigger and better brains; criminals and other degenerates had smaller and deformed brains. These beliefs had a long history, arising from social Darwinism, eugenics and racism. The Spitzkas, their brilliant contributions to neurology notwithstanding, exemplified this belief. Their work on the assassins’ brains, however well intended, has not stood the test of time. Was it heredity or the assassins’ curse that led to their premature demise – or did all lethal electricity play a part in this?

Robert M Kaplan worked in pathology, cutting up brains for two years. The consensus was that his skills would be better utilised in chicken egg sexing so he changed to psychiatry

A Stink That Can’t Pass the Sniff Test