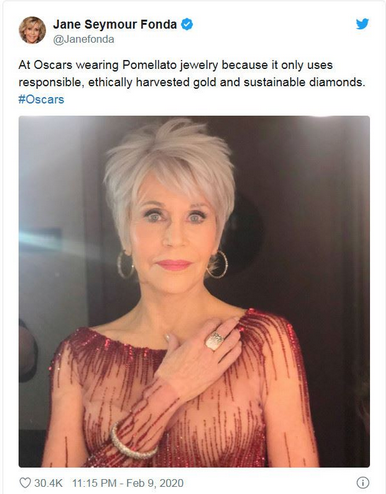 Stellar advice for the stars from Ricky Gervais at the Golden Globes: “If you win an award tonight, don’t use it as a platform to make a political speech … thank your agent and your god and f*** off.”  That advice, if taken, would let us Deplorables in particular enjoy their movies in blissful ignorance of what Hollywood thinks about the world. Alas, no chance. They simply can’t shut up.

I am running out of actors to watch. Make-believe is turning into a sideshow. Sanctimonious, and usually inane, political posturing has become the main game. I can’t recall seeing Joaquin Phoenix in many movies but I like him in the sci-fi movie Signs, starring Mel Gibson. Not yet seen him in Joker but I imagine he must have been good to win an Oscar. Mind you, he’s clearly a complete nut job in real life. So, I dare say, playing a demented clown is not too hard.

Leave aside his meandering and embarrassing soliloquy about racism and his pledge to save the planet by wearing the same tuxedo all award season. Catch, you must, his tortured anguish at the taking of calves from artificially inseminated cows and, to make matters worse, snatching their milk. It is either a quite marvellous spoof or he needs help.

I liked Sean Penn in Mystic River. I had no idea at the time that he is a communist. I don’t want to know. Little did I know when watching his movies that Robert De Niro would end up being best known for infantile temper tantrums directed at a president who has reduced unemployment to levels not seen for sixty years.

Then there is Alec Baldwin in The Edge; one of my favourite movies. How did I know that he would find his true calling by mimicking and ridiculing Trump on a late show? What a come-down. His co-star in the movie is the incomparable Anthony Hopkins. Now don’t tell me he has turned into a political activist. I couldn’t take it. I simply don’t want to know. By the way, Elle MacPherson is in the movie. For some reason I can’t for the life of me fathom I would be willing to cut her some slack if she were to drop a political line or two.

This brings me to Brad Pitt. I simply couldn’t believe it when I saw him on stage, collecting his Oscar for best supporting actor in Once Upon a Time in Hollywood, telling his audience that his allotted 45 seconds was longer than the US Senate gave to John Bolton. Talk about grating. What in the world was he thinking?

Brad Pitt is a talented actor. Compare his performances in Seven with Burn After Reading with Fury with Allied. Robert Mitchum, they said, mostly played Robert Mitchum, and John Wayne definitely always played John Wayne, and just look at Robert Downey Jr: whether playing Iron Man or Sherlock Holmes he gives exactly the same mannered performance. All the above have undoubted screen presence. Pitt has that too, but he also has range. And, to me, he looks as though he would be grounded in real life. Apparently not.

He was up there on stage only because of his performance as an actor in a movie. I enjoyed the movie, as I have all Tarantino movies, even though it is a bit overlong. And Pitt was a standout; though Leonardo DiCaprio was good too. Now I won’t be able to watch a Pitt movie without thinking of the moustachioed John Bolton. It is deflating. Illusion shattering.

Apart from Elle I haven’t mentioned actresses. For better or worse men tend to have more prominent roles in most action movies, which I have to admit to favouring. However, Sigourney Weaver is wonderful in each of her four Alien movies and I love Gal Gadot in Wonder Woman and can’t wait for the sequel. Gadot spent two years in the Israeli army so I have to think she will behave with propriety in public and keep her political views to herself.

Luckily, I don’t know what Ms Weaver thinks about politics but there she is at the Oscars in the company of Gadot saying to the assembled crowd that “all women are superheroes.” To be honest, I don’t mind her saying that so much. Though imagine Clint Eastward saying that all men are superheroes while standing next to Henry Cavill. It is faintly ridiculous, whichever sex you pick.

Our Cate Blanchett is, of course, a completely lost cause. Anyway, personally, I prefer Nicole Kidman on screen, and she admirably keeps her political views to herself. She did make a mistake a couple of years or so back in saying that Americans had to come together to support the president. Shocking views which she had to clarify.

When we look into the past it is hard to know the politics of movie stars. Sure, we know that John Wayne and Charleston Heston were Republicans but I doubt very much whether they or any of their contemporaries or predecessors spouted their political views while collecting awards. Bring back the silent movie stars of yore.

Hiding Behind Her Own Skirts

Why spoil a good story?