The High Cost of the Religion of Peace

It seems Australia’s Muslim community is very high maintenance. What other religious group needs to have hundreds of millions spent on it to prevent terrorist violence and extremism directed at its host country? And why is this issue always obscured and surrounded by disinformation that treats ordinary Australians as stupid, gullible, and intolerant?

On the one hand, the threat of Islamist terrorism is very real. In the 2015-16 budget the federal government announced spending of $450 million directly linked to combatting terrorism and violent extremism associated with the Muslim community. ASIO will receive $296 million over six years to employ additional staff, information technology and facilities, while the ASIS annual budget in 2015–16 has been increased to $405 million. Telecommunications corporations will receive $131million to assist them implement the mandatory data-retention scheme, and some $22 million will be spent over four years countering online violent extremism. Border security will receive funding for training the new Australian Border Force, new information technology, and smart gates. It was also announced that the government will spend $545 million over four years through the human services budget to support social cohesion and community based programs to complement national security activities.

In addition, we now have the NSW Premier Mike Baird announcing a very elaborate $47 million package to fight violent extremism within the Muslim community. The new program will provide five specialist teams to be deployed throughout NSW schools to respond to incidents of violent extremism and help schools identify students at risk of radicalisation. The teams will be high-powered, and include former principals, psychologists, trained counsellors, and student-support workers; they alone will cost some $15 million. In addition, 200 extra counsellors will be recruited and trained to identify vulnerable students and refer them to support programs. Moreover, school counsellors and teachers will receive extra support and training to identify students at risk, and a hotline will be established to provide advice on how to assist young people exposed to violent extremist influences.

Nor is the expense confined to schools, with $8 million to be given to various organisations to deliver ‘community resilience programs’, while officers of the Department of Family and Community Services will be given training in countering violent extremism. To top it all off, there will be a new ‘expert council’, with representatives from the private, academic and NGO sectors, to advise the government on how to counter violent extremism. Would the three veiled women disparaging Coptic Christians in the picture below, taken at a Sydney protest two years ago, qualify as extremists in need of counselling? Or is fine for Muslims to disparage members of other creeds, but more of that “ignorance” if anyone dares take note of such blatant and provocative belligerence. 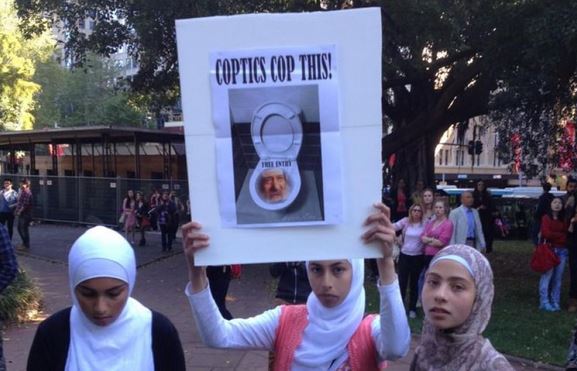 These are extremely significant programs and expenditures. Truly vast amounts of money are being diverted from health, education, social security, and many other worthy causes to be spent ensuring that members of one particular community do not engage in murderous acts of terrorism against the rest of Australia.

And all the while, as the money flows and pieties about acceptance and the scourge of Islamophoboia fill the airwaves, the greater public footing the bills for these costs continues to be treated as mugs. Despite the glaring reality of this threat, evidenced by massive government expenditure, we now have federal Attorney-General George Brandis denouncing alleged intolerance towards Muslims as proof of Australia’s “somewhat inconsistent attitudes” towards religious tolerance. Brandis claims

Members of the Islamic community are sometimes the victims of suspicion and hostility directed against them by those ignorantly seeking to blame terrorist violence upon Koranic teaching.

So there we have it, yet again: it is the Muslims who are victims, this time of the broader Australian community, which, in its “ignorance”, dares to deny that Islam is a religion of peace. Unfortunately for the Attorney-General, this is not a view of Islam held by Ayatollah Ruhollah Khomeini, the founder of modern Iran and the spiritual leader of contemporary Islamist terrorism. As Khomeini insisted in response to the question, “Is Islam a religion of peace?”

Those who know nothing of Islam pretend that Islam counsels against war. Those [who say this] are witless. Islam says: Kill all the unbelievers just as they would kill you all! … Islam says: Kill the [the non-Muslims], put them to the sword and scatter [their armies] … People cannot be made obedient except with the sword! The sword is the key to paradise, which can be opened only for holy warriors!

Khomeini was just getting started. He went on to express his contempt for those who prefer to ignore Koranic exhortations to violence:

There are hundreds of other [Koranic] psalms and hadiths [sayings of the Prophet] urging Muslims to value war and to fight. Does all that mean that Islam is a religion that prevents men from waging war? I spit upon those foolish souls who make such a claim.

Whatever George Brandis might claim, a great deal of the Koran advocates violence against non-Muslims. Moreover, Khomeini’s views have been loudly and unreservedly echoed by al Qaeda, Islamic State and other jihadist groups. This is a fact well known to the innumerable people who have studied the issue in the years since the 9/11 attacks and al Qaeda’s declaration of war against the West, the Bali bombings, the London bombings, the Madrid bombings, and the various successful and thwarted terrorist attacks in Australia.

Why, therefore, treat concerned Australians as mugs? Why set them up as ignorant bigots, xenophobes, and racists? To which audience is the government playing? Is it making a bid for the Muslim vote? Does it really think it will lure this away from the ALP? Does it really think it can behave this way without political repercussions? Despite what Malcolm Turnbull’s new regime may claim, there are now political alternatives for conservatives vitally concerned for the future of their country.

None of us appreciates being shot at or blown up, nor do we enjoy being treated as mugs who need to be spoon-fed a diet of mendacity. If it is worth spending vast sums to combat domestic Islamist violence, it is worth acknowledging the truth.

Italians, Statistics, the Virus and Us

Delusional, Malevolent or Both?