Putting Heydon in the Crosshairs

The way these things work, you just knew what was coming: the revelations emerging from the Trade Unions Royal Commission have been damning, so the investigation and the man conducting it, ex-High Court judge Dyson Heydon,  need to be smeared.  The effort first rippled through the media after Julia Gillard displayed her faulty memory while attempting to dismiss under oath the lingering questions and gross oddities of her legal work on behalf of union crook and former bedmate Bruce Wilson. It was, Labor talking heads took to saying, “Tony Abbott’s royal commission” or, more pointedly, “Abbott’s witch hunt”.

Then came current Opposition leader Bill Shorten’s turn in the witness box: Netballers signed up without their knowledge as members of the AWU. Sweetheart payments. Curious deals that worked to favoured employers’ advantage while simultaneously burdening commercial rivals with more costly labour contracts. 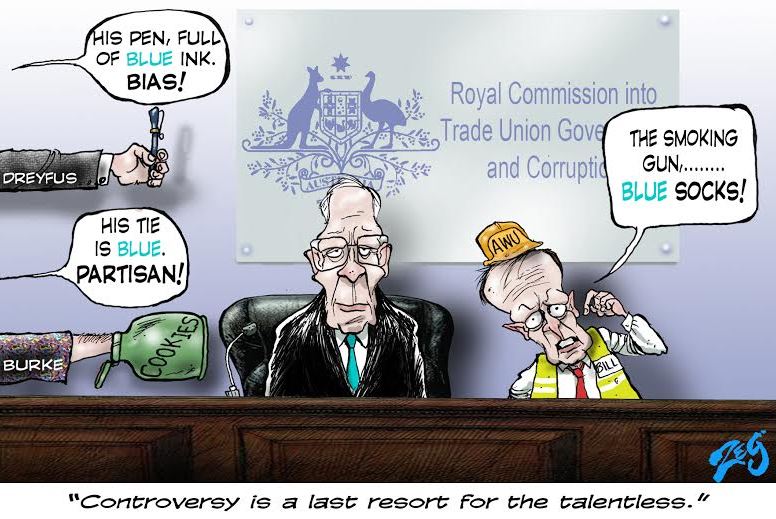 Understandably, perhaps, former AWU chieftain Shorten preferred to serve waffle rather than the red meat of direct answers sought by Counsel Assisting. It was a policy that drew some gentle but pointed advice from Commissioner Dyson Heydon:

“You, if I can be frank about it, have been criticised in the newspapers in the last few weeks and I think it is generally believed that you have come here in the hope that you will be able to rebut that criticism, or a lot of it,” Heydon advised after a particularly long and rambling excursion into irrelevance by the witness.

“I am not very troubled about that, though I can understand that you are, and it is legitimate for you to use this occasion to achieve your ends in that regard.

“What I am concerned about more is your credibility as a witness. A witness – and perhaps your interest as a witness as well. A witness who answers each question ‘yes’, ‘no’, ‘I don’t remember’ or clarifies the question, and so on, gives the cross-examiner very little to work with.”

Translated from its gentle legalese, the Commissioner’s admonition amounted to this: For God’s sake, not to mention your own, enough with the ducking and weaving! No matter how hard you try, attempting to bury this proceeding in an avalanche of dissembling is just not going to succeed.

Liberated temporarily from the stand — he has another appearance looming —  Shorten gathered the stenographers of the press about him to deliver the party line: “He has got a job to do,” he said of Heydon. “I get that. It’s Tony Abbott’s royal commission.”

The press gang dutifully took down his words, which was something of a first. Throughout the earlier course of the commission’s hearings the press benches had been largely empty, as union malfeasance isn’t a story that  recommends itself to the occupants of Australia’s newsrooms. Convene hearings on the decades-old sexual abuse of children by priests and the gallery will be full to bursting with hacks taking down every sensational word. Is Australian of the Year Rosie Batty ready for yet another close-up? Expect a further spurt of stories about the alleged “epidemic” of male violence. Those yarns news editors find congenial, fitting as they do with the narratives instilled in journalism-school graduates by their lecturers and professors. But unions as citadels of thuggery and corruption? Don’t be silly!

Now, however, Heydon and the commission are getting plenty of ink. His transgression, as defined by Labor and amplified by its friends in the press, is to have agreed to deliver the annual Sir Garfield Barwick Address. Last year’s speaker was fellow former Justice Murray Gleeson, a fact which suggests that legal acumen and reputation, rather than partisan sympathy, underscores such invitations. Upon learning the event was billed in the fine print as a Liberal Party fund-raiser Heydon withdrew rather than see his credibility brought into question.

Suddenly, all those revelations the press had found it expedient to ignore could be swept aside for good. What point would there be in mentioning standover men, cash in brown paper bags, phantom members and contracts negotiated at less than arm’s length? The better story — today, the only story — is the implied corruption of the commissioner himself, not the parade of sleazy sorts who have testified before him.

Indeed, the story is so appealing that Radio National’s Fran Kelly this morning all but handed the microphone to Shorten, who besmirched Haydon while singing his own praises as the world’s greatest and most upright friend of the working class. And just to make sure that the Labor leader’s cocktail of slurs and self-promotion received maximum exposure, Kelly punctuated the remainder of her broadcast with edited excerpts of his better zingers. Not since Uriah Heap opened the spigot of his sycophancy has an interlocutor been treated to such a display of quibble-free reverence.

There is really no point in going on about the national broadcaster’s endemic bias. It will remain just as it is until the government finds the backbone to make the ABC eschew naked partisanship and observe its charter, but there are certain things Abbott & Co., might wish to consider in lieu.

The first would be to fight back, nominate at every turn the reason why Shorten et al are so keen to knock the wheels off the royal commission, to help their union mates and financial backers hobble largely undamaged out of the spotlight and back into the smoke-filled rooms of sweetheart deals and trousered cash.

The second would be to clean its own house of operatives oblivious to the way events are framed and play out on the public stage. Did it not occur to anyone in the NSW Liberal Party that Dyson would not wish to appear compromised by the invitation to speak? He insists he did not know it was a Liberal affair and scratched himself when he learned as much.

In the meantime, as a cynic might conclude, this is where we are in Australia at the moment: a nation of immense and glorious potential caught between the tin-eared incompetence of one faction and the self-serving deceits of the other.

He Stoops to Concur