The Case for Coal-to-Oil Security

There are many good reasons for the establishment of an Australian coal-to-liquids (CTL) industry as soon as possible.  Let’s start with these five:

Terms of Trade and Employment: Australia is spending about $60 million per day importing oil and refined products, including petrol, diesel and jet fuel.  As the China boom deflates, our terms of trade will continue to deteriorate, as per this graph from the Reserve Bank’s May statement: 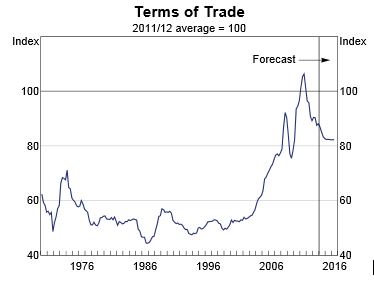 The Reserve Bank is being optimistic, envisioning the terms of trade flattening out to 2016, when it is more likely to keep plunging.  Any dollar sent overseas to pay for our mobility contracts our economy and reduces employment.  Let’s take the example of the Paid Parental Leave scheme, which was to raise $5 billion in tax revenue.  That tax would shrink the economy by $6.5 billion, with the loss of 48,000 jobs.  Using that metric, the $20 billion we are currently sending overseas for our fuel supply is costing about 150,000 jobs.  That figure will get worse as our own oil production declines and the price rises.  That is a future that can be avoided if we make the right choices.

Back in the 1960s, Australians still had memories of World War Two’s petrol rationing.  Everyone knew that security of fuel supply was vital to survival.  That is why the government of the day subsidised oil exploration, even though oil from the Middle East was plentiful and cheap at $4 per barrel.  When the Bass Strait oilfields were found they were not competitive against imported oil, so Australian consumers paid a premium at the pump to enable their development.  Australians at the time were prepared to put up with the pain of higher petrol prices because it meant they avoided the greater pain of not having any fuel at all.

Now that more Australian refineries are closing, a higher proportion of what we buy at the pump is coming from refineries in Asia — also the region in which any future war is most likely to be fought. Our neighbours up there aren’t happy: over 60% of people in countries bordering the South China Sea fear Chinese aggression and expect war. China is stockpiling oil at the ferocious rate of 1.4 million barrels per day.  What are Australia’s stocks?  Not so much.  We are not even compliant with our requirements under the International Energy Agency treaty we signed in 1973.

Filling the Imminent Hole in the Economy:

Construction of resource projects has contributed up to 7% of economic activity in Australia over the last few years.  Increases in activity in iron ore and coal has ground to halt with the topping-out of Chinese demand.  What is left is construction of LNG projects, as per this graph from the Bureau of Resources and Energy Economics in October 2013:

What is left is construction of LNG facilities spread out over a number of years.  As that activity also winds down, construction activity will fall off a cliff.  There will be a large workforce of engineers and tradesmen looking for something to occupy themselves and keep their families fed.  Ideally, they should be put to work building CTL plants.

The Returns are Good:

I was recently informed of a screening exercise on a proposed 5,000 barrel-per-day diesel plant on an Australian coalfield.  The project has an internal rate of return (IRR) of 20% to 25%, with a payback period of 4.5 years on a capital expenditure of $650 million.  The returns go up with the oil price, as per this graph: 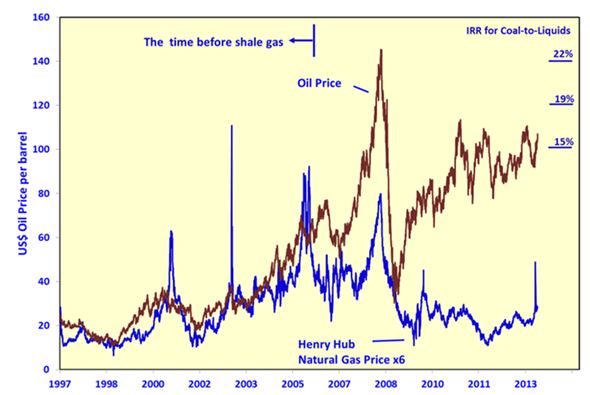 The un-geared return on such a plant at the current oil price is 15%, rising to 22% at US$140 per barrel.  The CTL plant would also capture the refining margin and transport cost of imported fuel.

The return on investing in CTL plants is going to be a lot higher than the $70 billion the previous Labor Government was going to spend on the NBN.  If we could find that significant sum for the un-needed NBN, surely we can find $70 billion to spend on CTL plants.  That sum would give us 540,000 barrels per day of refined-product capacity, with the plants built all where the fuel was needed.  That quantum of capacity is exactly what we need right now.

Another great thing about CTL plants is that they can use coal that is too low-grade to be transported anywhere.  Rocks with carbon content down to 10% will burn in pure oxygen thus coal washery waste, municipal waste, dead cats — the whole lot — can contribute to making our fuel.  That, in turn, means more life-giving carbon dioxide goes into the atmosphere.  The Chinese are also thinking along those lines, already digging up and burning 4,000 million tonnes of coal per year, which is ten times what Australia digs up.  China has built a number of CTL plants and more are on the way.  Beyond that, Beijing has plans for 50 coal gasification plants which would increase their coal consumption by one eighth.  That amounts to 500 million tonnes per year – more than Australia digs up now.

Should we be worried about the climate or some other of the green creed’s apocalyptic visions?  No, not in the light of  growing evidence that we are headed into naturally driven cooling cycle, not least of which has been global temperature’s 18-year refusal to heed warmist predictions and rise in lockstep with higher CO2 readings.  To help awaken the animal spirits that will build the CTL plants we need Canberra to repeal the National Greenhouse and Energy Reporting Act of October 2007, the last dark deed of the Howard Government.  That will send an important signal that we are absolutely serious about meeting our energy needs.

Wanted: a ‘Positive Deviant’ in the Trump Mould

Stick Around, Tony, Speak Your Mind

First Turnbull, then Morrison, next … Albanese?