Strangers On A Train

After a year on sabbatical at a US law school and then a Canadian one, my wife and I arrived back to Brisbane last week. We left temperatures in Canada nearing minus-40 and arrived for temperatures nearing plus-40.

What we also did, really on a whim, was to depart on The Canadian (below) from Toronto for Vancouver.  This 4,466 kilometre trip, taking three and a half days, included for us three full service meals a day, a glass-roofed dome car, a caboose lounge at the train’s back, and a double-bunk cabin of our own with shower and basin.  We even managed to snag an extraordinarily good fare for this, largely due to the wintry weather, which lowers demand for seats. 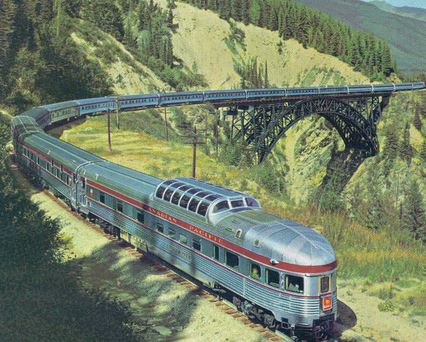 It was a spectacular trip for all sorts of reasons.  It was also one where nearly a third of the passengers in the sleeper section were from Australia. And my were the other passengers interesting.  We had a retired Sydney businessman who had been in Canada many times during his career.  We had a Tasmanian grandmother who’d been visiting her son and daughter-in-law in Ottawa, the son doing something for the Australian government that was too hush-hush to be talked about.

Then there was the federal prison guard from British Columbia; the lawyer-cum-adjudicator who was departing the train in the middle of nowhere, as he was hearing sex-abuse claims from natives who had attended residential schools in the backwaters of Ontario; and there was a big name foreign correspondent for the Post newspapers who had spent the last decade and more covering war zones in Afghanistan, Mindanao, Iraq and elsewhere, often embedded with the troops.

As you can see it was easy to pass the time just chatting.  But then the scenery tended to get in the way of that, moving as we did from the lakelands of Ontario (with so much freshwater it’s seen as a free good) through the endless prairie plains into the majestic and magnificent Rockie mountains.  You really have no idea of the vastness of a place when you fly over it in five hours.

I didn’t mention that there was also an interesting young man on the train who was working for a well-known environmental organisation.  Also aboard, a retired doctor and his wife.  All three were adamantly against the building of a Canadian oil pipeline, and especially the mooted Keystone pipeline to the US.

Listening to these three I felt the way I do when at dinner parties with otherwise smart, amiable and well-informed people who start to go on about the benefits of this homeopathic remedy or that supposedly complementary treatment.  Basically, they are talking through their hats.  These things are worthless.  Not one has ever passed any double-blind testing ever.  And after saying so bluntly once or twice in the past with unpleasant consequences, and because I am at core afraid of my wife, who is more socially aware, I now bite my tongue.

I did the same on the train with these well-intentioned and self-styled environmentalists.  I refrained from pointing out that every second train passing us and going the other way was a freight train laden with oil, and that the environmental risks associated with rail transport were orders of magnitude greater than with pipelines.  No pipeline, you see, means it gets shipped by train, not that the oil stays were it is.

This incredible naivete reminds me of the mindset of many Greens voters.  It’s as though they exist in some parallel universe where one is not obliged to weigh up competing costs and benefits and where the really important thing in life is to feel morally self-righteous.  So if logs are taken for processing in some overseas country where the plant is much worse environmentally than it would be in Australia, or if a domestic carbon tax has absolutely no effects on world carbon dioxide production – zero – that doesn’t matter at all.  It’s all about revelling in one’s own perceived moral superiority.  Consequences be damned, so long as I feel good about myself!

I like to call this ‘bumper sticker moralizing’.  It is a disease that is endemic amongst the inner-city metropolitan elites in Australia and Canada. Those two countries are plenty similar in lots of other ways, too.  That’s no doubt why the chemistry on the train, filled as it was with Canadian and Australians, with a small handful of Americans by way of spicing things up, worked so well.

Oh, and for all of you here languishing in the hot and humid conditions, let me make you feel a bit better by mentioning that when our train pulled into Winnipeg (about the halfway point of the journey), the temperature there was minus-51 degrees with the wind chill factored in — as one of the local newspapers put it, ‘colder than the surface of Mars’.