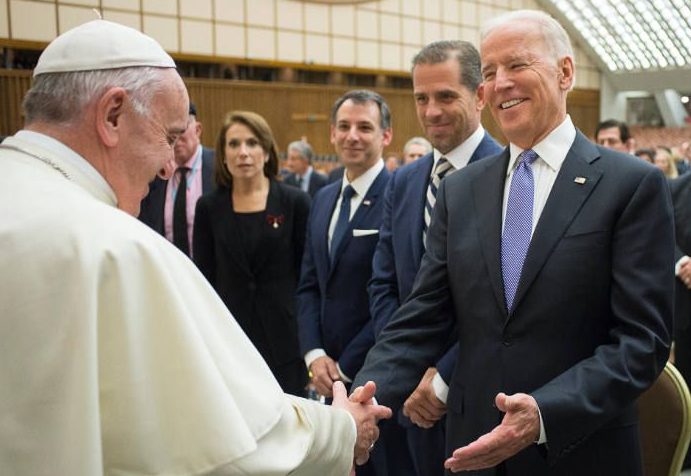 Flogging a dead horse is nothing unusual. Some people – Australian republicans, campaigners for “balance” on the ABC, British EU “rejoiners” – do it all the time. But two dead horses flogging each other is a rare spectacle. That’s why it will be such a privilege to watch President Biden and Pope Francis in Rome on Friday demonstrating with their unique skills just how this act of deceased equine futility is done: two not very pleasant elderly exemplars of unprincipled ambition reinforcing one another in the illusion that each has something useful to say to the world, something to contribute to the betterment of mankind.

The pair of them will meet in the Vatican to earbash each other on the “climate emergency”. One assumes there will be plenty of black coffee on hand; it wouldn’t do for any of the assembled cardinals and diplomats to yield to the torpor and nod off while these two geriatric bores drone on about the world’s most tedious topic.

Insomniacs on the other hand might find it quite a treat as a senile opportunist and a crafty Peronist schemer try to outdo each other in lecturing us on what we should be going without for the sake of the weather. One hopes that some Vatican functionary is arranging for the wind generated by their combined utterances to be sustainably “harvested”. It could power the floodlighting of St Peter’s.

Biden is on his way, or being steered there, by his keepers, to extrude his verbal contribution to that Olympiad for climate catastrophics, COP26 in Glasgow. Francis had been going too, but changed his mind. Too many other blowhards, he probably decided. As his dictatorial papal style has long demonstrated, he doesn’t like competition. He always has to be the centre of attention.

One might wonder why a Pope is shoving his oar in on secular matters, but perhaps the kingdom not of this world is too small a stage for his talents. Anyway, a quick tête-à-tête in Rome will have to suffice for his agenda with Biden. Can we hazard a guess about what they’ll come up with?

First they’ll diagnose what to do about the climate. This will no doubt be along the lines of less coal for everyone except China, immediate canonisation of St Greta the Ecobrat, wind turbines on all church towers, bath night on Saturdays only – practical steps like that. Next one imagines them turning their attention to solving the COVID crisis. Jail anyone who calls it the China virus might well be Francis’s contribution, since he and President Xi are now all hotsy-totsy together since their agreement to accede to Beijing’s demand and throw China’s loyal Catholics under the bus, or in this case the Tiananmen tank, in return for the Vatican not saying unkind things about Xi’s persecution of the Uighurs. Yes, it’s that kind of one-way deal, a real bargain for the Church.

Biden’s take on COVID will be whatever floats through Dr Fauci’s mind that morning transcribed to the presidential autocue.

Though their sage deliberations will be somewhat impeded by their masks and by the inability of His Holiness to speak fluent English, a deficiency shared with the President, it is already clear that one topic they are not intending to discuss is just how Biden reconciles his zeal for abortion, which as far as he’s concerned is fine right up to birth and perhaps after, with his professed “devout” Catholicism, given that the Roman Catholic Church considers abortion murder. Bringing up that subject would be simply too tactless. Why, if the discussion heated up, and the Pope decided to throw his weight about – something he is more than happy to do with those less powerful than himself, like the traditionalist Catholics he is trying to deprive of the Latin Mass they prefer – he might find himself excommunicating Biden on the spot. What kind of disadvantage would that be for a politician who’ll be depending on Catholic votes if he decides to contest the 2024 election, or indeed for that politician’s party in the mid-terms next year? Francis might find he’d been instrumental in bringing Republicans to power, a far worse sin in his leftist eyes, and in the eyes of his Democrat-supporting episcopal toadies in America, than the disposal of a few foetuses that nobody wanted anyway.

Besides, time is precious at such a short meeting, and no one is prepared to waste it going over ground that was gone over, beg pardon, not gone over, a week or so ago when, all piously draped in black, that other American Catholic abortion enthusiast, Nancy Pelosi, speaker of the House of Representatives, graciously dropped in on Pope Francis. The Pope’s failure to raise the subject of foeticide with her did not, an American archbishop explained, imply endorsement of the old harpy’s views. Perhaps not. But it was hardly a ringing condemnation either. What about the moral leadership popes are supposed to show? This Pope would seem to find it more diplomatic, for want of a better word, not to say anything that might save unborn lives if the price of doing so is to challenge the consciences of the very people whose approval helps the abortion mills grind on.

If the head of the Catholic Church will not exercise his considerable spiritual power to bring errant members of his flock to renounce their sin he and the whole institution should shut up on moral questions. One suspects that the founder of the Church would not have been so circumspect.

“Human dignity” is another item on Friday’s agenda. Biden and Francis, according to the White House, will discuss “working together on efforts grounded in respect for fundamental human dignity”. You might have thought that on any reading the right to be born would have come under that heading. But let’s not take things too seriously. The whole statement is meaningless media-handout verbiage. That “working together” gives it away. Imagine the two of them sitting down at a drawing-board, sleeves rolled up, brows furrowed, designing a master plan for the achievement of fundamental human dignity, periodically sending out for coffee or a sandwich so as not to interrupt their lucubrations. But of course they haven’t even said that they will work together, only that they’ll discuss doing so. Just empty words.

Before gladhanding the Pope, Biden will sleepwalk through, beg pardon, grace with his presence the Group of 20 summit, also held in Rome (the Eternal City’s tourism promoters having been busy drumming up custom to offset the winter decline in visitor numbers). Just for a change, they’ll talk about the terrible state of the climate. This will be a warm-up, so to speak, a rehearsal for the full extravaganza of global warming hysteria in freezing Glasgow.

Could voters really be this dim?

Leonard Bernstein: A Place for Him