Blood And Money At The OzCouncil

Back in March, 2013, Quadrant Online noted a light-hearted Twitter exchange between Sophie Cunningham, chairperson of the Australia Council’s Literature Board, and her dear friend, author Benjamin Law. Reproduced below, the dialogue can only have struck some as ill-advised, as it might encourage the cynical to conclude that receipt of taxpayer funding has something to do with personal bonds and friendships, rather than mere merit alone. 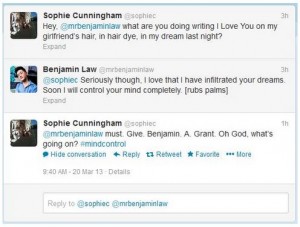 Events of the past 10 months will have done little to banish that suspicion, as it appears the Law family – not just Benjamin — has been doing rather well at the literary trough. A month or so after the Twitter exchange at left, Benjamin Law’s sister, Michelle, picked up a $10,000 grant to build “a sustainable career as a writer and expand my professional networks internationally.”

Her “mentor”, as she puts it at her website, Fully Sick,  just happens to be …. Sophie Cunningham!

Fully Sick is a blog that tracks the development of the essays I am writing as part of JUMP, the Australia Council’s national mentoring program for young and emerging artists. With the guidance of my mentor, writer Sophie Cunningham, I aim to write a collection of memoir essays linked by the theme of illness.

Good writing is to be cherished, of course, and it goes without saying that a publishing professional, habitual guest on the lit-fest circuit, not to mention a former Meanjin editor and member of the Nazi-spotting Overland push would have a keener eye than most for those well-turned sentences which signify a stylist in the making. Perhaps passages like this, from another of Michelle Law’s blogs, stoked Ms Cunningham’s nurturing instinct:

Although Michael has practically been living with me for the past six months, this month it’s official! And we’re going to start doing grown up things, like buying a couch and cleaning the bathtub. I’m also going to find a new fish tank for Graham because he’s outgrowing the current one and I think he’s a bit lonely. (That said, when I thought my first guinea pig was lonely and bought her a friend, she started biting the friend until both occupied opposite ends of their hutch and never interacted.) We are also going to rearrange the rooms in the house so my current bedroom becomes my office, and my current office becomes our bedroom, which I’m not hugely looking forward to because I don’t want to wake every morning to the sounds of my upstairs neighbours having sex. Which happens a lot. (Usually around 12:45am, and again at 6:30am the following morning, every time my neighbour’s boyfriend is in town and after they finish talking loudly and smoking and listening to C-grade RnB.) Around the fifth time I heard them humping (there is just no other word for it) I decided to play the least sexy song I know (Tom Jones’ ‘What’s New Pussycat’)but somehow this only made them hump faster. Then I blasted Tori Amos’ ‘Big Wheel’, which confused them long enough to stop and for me to run to Michael shouting, “They’re doing it again!”. On this particular occasion, I waited until they finished, at which point I applauded loudly and they promptly drove away in the boyfriend’s ute.

In conclusion, despite overhearing incredibly boring and loud sex, what was my worst year last year has turned out to be the best year this year (emotionally, professionally, mentally, etc etc) so you never know what’s around the corner.

Maybe Edward Gibbon would be evenly more widely recognised as a fine writer if an arts-grant system had been up and running when he was scratching away at Decline and Fall. Who knows, that magnum opus might today be less revered than his sadly unwritten reflections on thin floors, amorous neighbours and the domestic arrangements of feuding hamsters?

As a writer, brother Benjamin clearly has some competition at the Law family table – although he is already well ahead in one respect.

While his sister pocketed a paltry $10,000 from the Literature Board, Benjamin walked away with $40,000 in last September’s grant list. Evidently the the Twitter exchange with Ms Cunningham did not ruffle the Lit Board’s conviction that its chairperson’s friend was a thoroughly deserving sort. Nor does it seem to have prompted thoughts of Caesar’s wife and that quaint, old-fashioned concept of striving to be seen as above reproach.

UPDATE: Andrew Bolt has noticed more family ties in the Australia Council largesse. Habitual grant recipient and mother of another, Alison Croggon, isn’t happy about it. Not happy one little bit!

Roger Franklin, whose books have had to repay his publishers’ advances out of  royalties, is the editor of Quadrant Online

Logic Joins The Hunt For Flt 370

A Discordant and Delusional ‘Harmony’

State of the States