Another Lit Board joke?

At Quadrant, we have been puzzled by the Literature Board of the Australia Council and the logic it brings to bear in deciding which writers and publications are awarded access to the public purse.

…the Literature Board has made a blatantly political decision. Throughout the eleven years of the Howard government, its appointees never reduced the funding of overtly left-wing literary magazines like Meanjin, Overland, Griffith Review and Australian Book Review. Under the Rudd and Gillard Labor governments, those journals continued to receive much more money than Quadrant—more than $60,000 a year—even though they carried only a fraction of our literary content and had much smaller circulations.

Meanjin, for instance, is published only four times a year, compared to Quadrant’s ten issues, and carries less literary content in each of those editions than we do. In its Autumn 2012 edition, Meanjin published three pieces of short fiction and twelve works of poetry, while in December 2012 Quadrant published two pieces of short fiction and twenty-seven works of poetry. Meanjin sells less than 1000 copies per edition, while Quadrant’s subscription and newsagent sales total 5500 copies per edition. Yet the Australia Council rewards Meanjin with a privileged position as one of its “key organisations”, which guarantees funding for three-year periods, while Quadrant is made to stand in line like a naughty boy and re-apply for funds each year.

So when the Gillard government this year appointed former Meanjin editor and left-wing feminist Sophie Cunningham as chair of the Literature Board, we knew what to expect. Still, we did not anticipate such a ruthless and heavy discounting of our good name. Under Cunningham’s editorship, Meanjin published at least one derogatory article about Quadrant and several articles and blogs criticising me in particular. With such a track record, she was obviously an interested party and should have stepped aside from any decision about our funding.

Thanks to Twitter, there is now further reason to wish for more transparency in the allocation of Literature Board grants, not to mention a diplomatic restraint on the part of one who allocates them.

The following exchange took place on the morning of Wednesday, March 20, between writer Benjamin Law and Ms Cunningham: 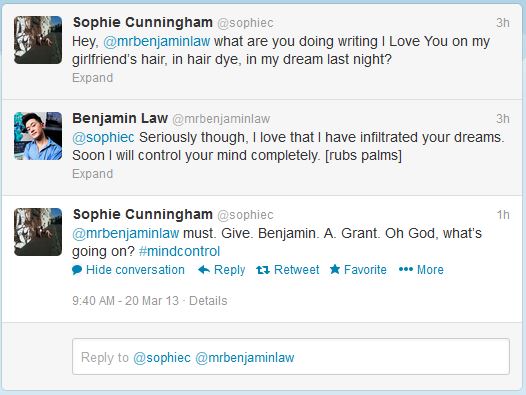 A joke between good mates, perhaps, but a public comment — "must. Give. Benjamin. A. Grant." — that some might see as cause for concern. Given the largesse lavished on certain writers and publications, how can anyone tell if Ms Cunningham’s message is an ill-advised jest or a statement of intent?

With this Literature Board it is hard to know.

The Long Arm Of Russian TV