Governments normally sugar-coat budgets, packaging a combination of give-aways and, increasingly, cross subsidies, with boasts of how much of our money they are returning to us.  Fifteen years ago, Bill Shorten and Malcolm Turnbull sparred over whether the top income tax rate should be 30% (Shorten) or 35% (Turnbull).  Neither, of course, had any resolve to confront the lower level of spending that such reduced funding would entail.  Neither now seriously proposes a maximum less than 46%.

The key budget issue is spending. In terms of the Commonwealth, this has been a gradual, if interrupted, upward trajectory since the late 1960s.  The government share was pushed along strongly in the ALP administrations, followed by the Coalition pegging back spending somewhat, but never totally.  Spending commitments are made and undoing them is extraordinarily difficult. Politicians recoil from taking back funding from those who receive it and have come to consider it as no less than their right and due. The prospect they will change their votes looms large. As a result the Commonwealth spending share of GDP has risen from 18% in the early 1970s to today’s 25%, give or take a whisker of a percentage point

The last success in reducing expenditure was achieved by Peter Costello, who as treasurer in 2007 brought down spending to 23.1% of GDP in 2007 — this despite pressures from within the Coalition to splurge on buying votes and with an opposition in control of the Senate that was determined to exploit any opportunity to direct taxpayers’ money to worthy (i.e. vote-winning) causes.

Costello’s relatively good outcome was quickly reversed by Rudd-Gillard (who can forget Kevin Rudd’s pre-2007 battle cry, “This reckless spending must stop!”? Lovely sound byte, but a hollow rhetorical flourish when his spending proclivities were encouraged and enabled by that Keynesian big-spender, Treasury Secretary Ken Henry.

“Keeping a tight rein on spending” is one of this year’s budget slogans. But the outcome is not encouraging.  The table below illustrates how spending (excluding net capital investment) would have developed had we maintained the real (inflation- and population-adjusted) proportion of 2003/4, a level that was reached even before the share of spending had fallen to the Costello minimum. 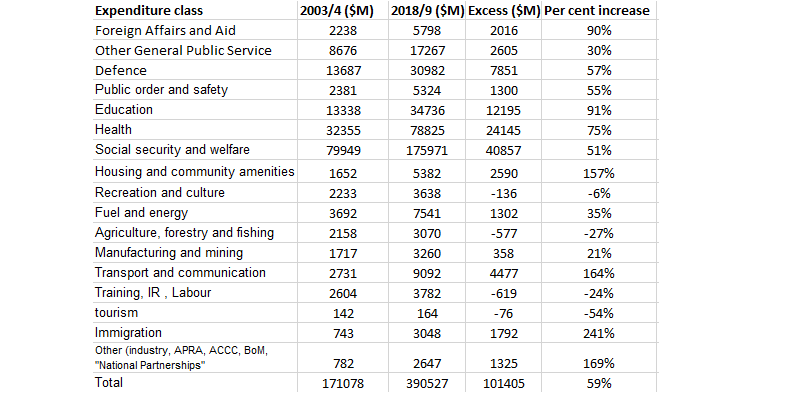 The first thing to recognise is that, had we maintained a measure of discipline in keeping the spending share to that of 15 years ago, we would now be spending over $100 billion less — indeed, even more than $100 billion if the ‘off budget’ spending on roads, renewable energy and the NBN were to be included.  This is a sizeable sum in the context of the nation’s $1,700 billion economy.

Not only would keeping the spending proportion constant eliminate the $18 billion deficit (optimistically forecast to be reduced in future years), it would mean more spending available to income-earners. Those seeking to divert money from earners to recipients falsely claim that, in doing so, overall income levels will increase. Sponsors of the notion that higher spending by governments is a wealth generator not only include the socialists you would expect, like Sally McManus and the ALP generally, but also, alas, prominent Liberals.

The fact is that such diversions never bring increased wealth. Permitting income earners to retain more of their wealth will bring enhanced incentives to work, together with a greater surplus for savings, hence investment. It would also raise the likelihood that Australia can break out of the lacklustre 1% per-capita growth to which our politicians have seemingly become reconciled.

Simply put, there is no evidence whatsoever that the increases in income redistribution over the past 15 years have brought any offsetting improvement in national happiness, no matter by whichever means you might care to measure it.

The obvious places to look at savings are those that have experienced the most rapid increases: immigration, regulatory agencies, transport and communication, housing and community amenities, education and foreign aid.

The big expenditure items are health, education and welfare (including housing) which account for some 70% of total spending.

Government spending in Australia remains excessive.  Institutionally, we have developed a framework biased in favour of greater spending while spurning fiscal discipline.

Unless determined efforts are encouraged and made to cut obvious waste and poorly targeted programs — twin nettles Treasurer Morrison has conspicuously disdained to grasp — Australia’s mediocre economic performance is certain to be maintained.

The Networks That Snared George Pell