The ABC in a sorry state

Earlier this week Tony Abbott journeyed to Devonport, where he visited a towel factory, met reporters and took questions, many inspired by Labor assertions that he plans to revamp GST revenues and diddle the Apple Isle of its rightful share. The ABC duly reported the conference, which at times was rather testy.

Here is how the ABC’s southern outpost presented the gist of what its reporter claims to have witnessed: 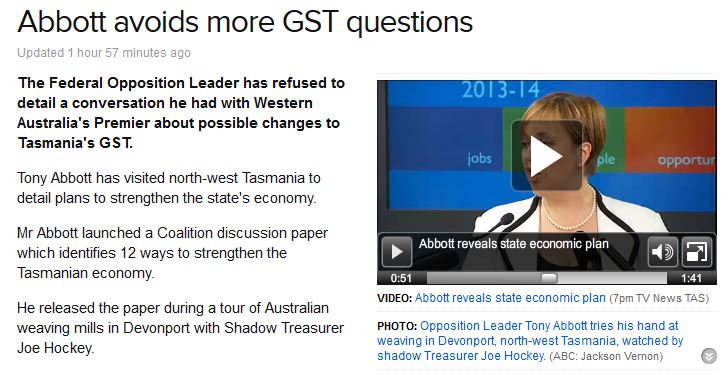 In the screen grab above, notice the related video footage to the right of the text. For technical reasons having to do with Quadrant Online’s primitive publishing system it is impossible to embed that video on this page, but it can be viewed by going here. Ten seconds into the video, reported by locally based journalist Emily Bryant,  the talking head who introduces the clip says this:

So, the website headline says Abbott dodged questions about GST reductions and the video directly refutes that assertion. The national broadcaster consumes around $1.2 billion per year (and rising) in taxpayer funds, but that is evidently insufficient to hire editors competent to reconcile directly contradictory accounts of the same event, even when presented side-by-side on the same page.

But there is more to the ABC’s “coverage” of the Devonport event than that, starting with the first paragraph shown in the screen grab above:

“The Federal Opposition Leader has refused to detail a conversation he had with Western Australia’s Premier about possible changes to Tasmania’s GST.”

What follows is the transcript of the exchange between Abbott and the ABC’s Jackson Vernon, who came all the way from his base in Hobart:

QUESTION: In terms of GST, I know Mr Abetz touched on that briefly. Can we just get some clarity? When Colin Barnett said that he’s had discussions with you saying that you will not prop up weaker parts of the states by the stronger economies. Is he misquoting you there?

TONY ABBOTT: Well I’ll put that to one side. Let me just say and I’m pleased that Joe and I are here together with Eric today. We want to make it absolutely crystal clear that Tasmania will never be worse off under the Coalition.

QUESTION: But in terms of that discussion though, is he misquoting you with that?

TONY ABBOTT: You’ve had your say.

QUESTION: But I’m just asking you about this direct question, because I don’t think that you’ve addressed this statement that he’s made, because doesn’t that kind of contradict what you’re saying about Tasmania if he’s saying this?

QUESTION: Why do you think Colin Barnett’s saying these things though? Is he saying this?

TONY ABBOTT: I’m relying on your quotations and I would respectfully prefer not to do that. The fact of the matter is, I give Colin Barnett, I give Denis Napthine, I give Barry O’Farrell, I give Campbell Newman a respectful hearing and if Lara Giddings rang me up, I’d give her a respectful hearing……

QUESTION: Are you saying that the WA Premier is lying with regard to these comments?

Worth noting is that the ABC’s Vernon believes Abbott has been given “a free pass” by the media, tweeting his endorsement of the in-your-face encounter between the Opposition leader and 7.30‘s Leigh Sales in August, 2012. The interview was the subject of complaints alleging bias on Sales’ part – complaints investigated by the ABC and ACMA, which  both concluded the ABC’s compere had done nothing wrong. (The 7.30 segment is here, for those who need a reminder of what the ABC considers fair and impartial)

While that is a side issue, Vernon’s quoting of WA Premier Barnett is not. It is the heart of the ABC reporter’s leading assertions and questions:

1/ “Colin Barnett said that he’s had discussions with you saying that you will not prop up weaker parts of the states by the stronger economies. Is he misquoting you there?”

Before dashing to Devonport to confront Abbott, Vernon quite likely checked the ABC’s archived news clippings. Indeed, that was almost certainly the case because his “direct quote” from Barnett is on the record and can be found here. This is the relevant section:

Mr Barnett says he has spoken to the federal Opposition Leader Tony Abbott in the past week about changes to WA’s GST share.

The Premier says Mr Abbott did not make any firm commitments but he [Barnett] plans to continue campaigning for a bigger share right up until the federal election.

"I think Tony Abbott at least understands the problem," he said.

"My response was that what we are proposing is a gradual transition of the system."

By any reasonable reading, it is nothing like the smoking gun that the ABC headline would have its audience believe. Abbott, as stated by the ABC’s own account, refused to commit to giving WA a larger slice of GST revenues. And, according to the same cherrypicked quote Vernon recited without context, Abbott’s observations were about the economy as a whole, not the GST.

How do we know this? Well an ability to read plain English should be enough, but for ABC types and those not so blessed, by Barnett’s assertion that he takes “some heart” from Abbott’s general observation about the economy, and that he plans to continue pushing for a “gradual transition of the system”. If he has to keep pushing, then it follows that he hasn’t nudged Abbott into agreeing with him.

Also worth noting are three words in the first iteration of the alleged quote that Vernon flings at Abbott as their exchange begins. (emphasis added)

“When Colin Barnett said that he’s had discussions with you saying that you will not prop up weaker parts of the states by the stronger economies.”

For whatever reason, those words about the states appeared out of nowhere – which is perhaps the oddest thing of all about the ABC’s account of the Devonport press conference, the direct contradiction between the website headline and video notwithstanding. While adding a dash of creativity to Barnett’s paraphrased quote, Vernon neglected to report something that was there and obvious all along. Indeed, many might think it is the essence of the very point Abbott was trying to make about economic basket-cases like Tasmania. Here is what the ABC chose not report:

The Devonport press conference took place on the same day Premier Laura Giddings announced her latest budget and projected deficit, this time of $450 million. The ABC still managed to include her attack on Abbott’s alleged plan to harm her state by screwing with GST revenues, as can be seen 47 seconds into the video.

Why would the ABC squeeze in Giddings’ scare and omit Abbott’s observations on the sorry depths Tasmania is plumbing under her stewardship?

As mysteries go, it is a riddle as big as the ABC itself, which is to say no mystery at all.

Get on Your Marx, Statue-Topplers