The not-so-shocking truth about FDR

If you are a simple person who enjoys the lighter side of life, you might like to share my Chortle of the Week via The Movie Show, where Margaret Pomeranz discovers FDR was a pants man. She says of Bill Murray’s latest outing as FDR in Hyde Park on the Hudson:

‘I actually could not see the point of it and I thought it was all a bit sleazy actually … This man has saved America from the Depression and it turns out he’s got all these mistresses around that perform services for him … I’d rather have him heroic, actually … I don’t want to know.’

So it turns out that FDR had all these mistresses around that performed services for him. Who knew? Well, FDR’s mum knew, and his wife, and his other mistresses, and his staff, and several journalists, and probably the Vice-President and the joint Chiefs of Staff. 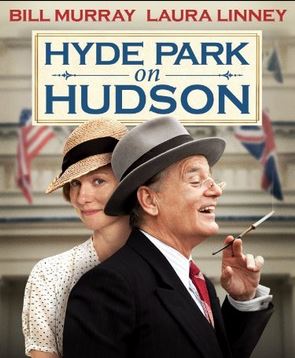 I also knew, and so does everyone I know. In fact pretty much everyone knew except Margaret Pomeranz, which makes it appear something of an oversight on her part.

So anyway, FDR picked up a poor, ageing cousin of his because he was a Great Man and also bored and tired, and used her to while away his spare hours in between entertaining George VI and Queen Elizabeth at his country house. Along the way, Nancy Astor’s china gets smashed, and hearts get broken, and a great many ciggies get smoked, and it is the last part I find the hardest, as I always end up wanting one.

The dynamic between Cousin Daisy (Laura Linney) and FDR (Bill Murray) is interesting, and it does provide a great deal of food for thought about how a vulnerable and poor middle-aged woman who hero-worships her cousin, the President, could be debauched quite so simply and effectively. It also offers some sobering reflections on the powerlessness of so many women around powerful men, women who feel that their best option is to turn a blind eye – like the US did to FDR’s paralysis – and become part of a self-perpetuating harem. We are also left in no doubt that Eleanor played for the other team, and the reasons why she took this path.

Fair enough. But the bit with which I took the most umbrage was the ludicrous and cardboard cutout George VI and Elizabeth. If this was the US attempt to make The King’s Speech, then everyone involved with this film needs to be sent back to film school, and possibly back to high school to learn some actual history. Bertie and Elizabeth are shown as neurotic, childish dolts who lived in a nursery cocoon of upper-class twittery. I think this may be true to an extent, but so did FDR and all his rich and inbred mates on the country house circuit. And personally I have never seen so much fuss made about a hot dog in a motion picture. You’d think it was Proust and the madeleines, but it’s not. It’s just a damn hot dog.

Probably one of the real strengths of this film is its dark take on the comedy of manners – the lies people tell, the smiles pinned on faces, the manipulation of the media, and the web of counter-intelligence and secrets that can be spun around the rich and famous. But other than that, and the pleasure of seeing Bill Murray on the big screen again, I’d wait for the DVD.