Oh dear, it has happened again. After that shocking provocation of the Religion of Peace by those terrible Mohammad cartoons, we thought that we had all settled down under a benign self-censorship regime. Now some obscure amateur movie maker has upset the delicate sensibilities of jihadis worldwide. One can only admire the show of force by the US Feds against the benighted wretch. If only he had posted images of “Piss Christ” instead, he might not have breached his probation orders.

How dare Mitt Romney defend the First Amendment’s guarantee of free speech at such a delicate moment! Reporters from the mainstream media now shout in unison: “What about your latest gaffe, Governor Romney?”

There are many historical parallels. We had a terrible war in part because Winston Churchill provocatively insisted that we should never surrender. (“What about your gaffes Mr. Churchill?”).  By contrast, Lord Reith tried to preserve the peace by banning Churchill from broadcasting on the BBC and Geoffrey Dawson, as editor of The Times, tried to preserve the peace by censoring news from Nazi Germany.  Just as in more recent times, cartoonists shared much of the blame. David Low (an example of whose work is below) must surely have provoked Dr Goebbels, General Secretary Stalin and the Fuhrer with his rudeness. 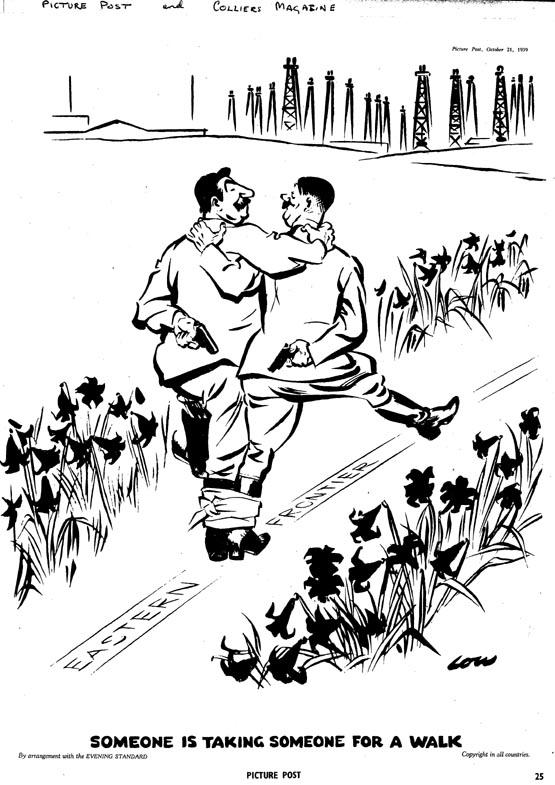 Welcome to the post-modern, post-American world in which we agree to Islamic totalitarians defining the limits of our freedom. Whatever they do, we are responsible. Bette Midler asserts that the maker of the video should be charged with murder on the new-age logic that opposition to or ridicule of murderous jihadists renders one complicit in their crimes.

If jihadists worldwide choose to feel provoked beyond endurance by some obscure internet movie, who knows what will provoke their hurt and outrage in the future? Will President Obama, Hillary Clinton, Susan Rice and the usual collection of useful idiot celebrities react by continuing to condemn whatever is deemed provocative by jihadists?

Let’s not waste our time trying to tell Rice, US Ambassador to the UN, that the attacks on the her country’s consulate in Benghazi were planned. According to her, the President of Libya is talking nonsense. Nothing should be allowed to get in the way of an assault on the First Amendment of the US Constitution.

When it comes to the key choices – between clear-eyed perceptions and delusions, between wisdom and stupidity, between principles and cowardice, which choices will the Obama Administration make? Will the West destroy itself with a deadly combination of delusions, stupidity and cowardice?

Christopher Carr is a frequent contributor to Quadrant Online

Bath Time in the EU