The Majesty of the Law 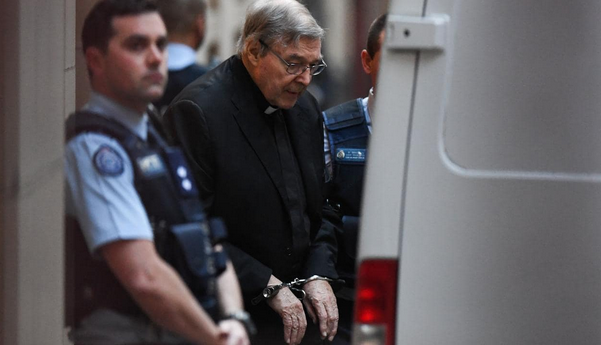 When George Pell arrived at the Victorian Supreme Court on June 5 for the hearing of his appeal against his conviction for child sexual abuse, guards put him in handcuffs. As he walked the few steps from his prison van into the courthouse, press photographers captured this compelling symbol of his fall from grace. Fairly obviously, the paparazzi were at the right place at the right time thanks to someone who leaked inside knowledge. Moreover, the scene had nothing to do with security. No one could have seriously regarded Pell as a flight risk who, if left with his hands free, might have knocked down his guards and bolted from the courthouse to freedom.

Nor could this display of his degradation reflect some egalitarian policy of treating all convicted prisoners alike. Only a minority of them make appeals and few of these are dangerous enough to warrant the security precautions taken with Pell. Moreover, it must have been apparent to those responsible that the image would be captured on that evening’s television news and the next morning’s front pages, to both shock Pell’s supporters and delight his detractors. In short, it smacks of a put-up job.

The appeal was not the first time something like this happened. After Pell was sentenced, and before he was led off to prison, he was required to sign the Victorian Register of Sex Offenders. Under the Sex Offenders Act 2004, there are three options for the length of time someone remains on the register and reports his movements to the authorities: eight years, fifteen years or “the remainder of his or her life”. Sentencing judge Peter Kidd gave Pell the last option: “By virtue of you committing these offences,” he said, “your reporting period as a registered sex offender is for life.”

Kidd was obliged by state law to do this. However, seeing that an appeal against the conviction was immediately lodged, couldn’t the addition of Pell’s name to this odious file have waited? Moreover, if his appeal is successful, is his name then erased from the list? What if he is exonerated but there is a subsequent appeal to the High Court? How long would his listing remain intact? It is not hard to see that for genuine, serial pedophiles there is a need for an index of this kind, but in a disputed case like Pell’s it can remain an awful and lengthy defamation of an innocent man.

Under the Australian system of justice, punishment is said to be limited to the deprivation of liberty. Once an offender has served his time, he is supposed to be restored to his normal place in society. However, the above two symbols of the way Pell has been treated have added stains to his name that are indelible. And this is despite the fact that, at the time of writing, the outcome of his appeal has not been decided. It must be emphasised that most informed observers of this case regard the conviction as highly contestable. This is true even of Pell’s most prominent enemies and haters, like journalist David Marr, who wrote in The Guardian on June 1 that “George Pell stands a good chance of winning his appeal next week.” (Marr’s long-term hope is that the question will eventually go to the High Court where he claims legal precedents would make Pell’s prospects more difficult.)

Hence, the symbolic punishments of humiliation and dishonor already handed to Pell are both unwarranted and unfair. They make it seem that those responsible have used the opportunity to inflict additional punishments on the accused while they still could, and well before the full processes of the law were exhausted.

This brings me to a different issue about one point of evidence in the trial that questions the soundness of the jury’s decision. It is a matter I thought might be raised in the appeal but, as far as I can tell, was overlooked. It is an issue which, in the absence of a published transcript of the evidence of the complainant, is not easy for lay observers to resolve. However, there are enough clues in the existing documentation to show that some of the case against Pell was obvious and uncontestable rubbish.

In his sentencing of Pell, Peter Kidd in Paragraph 26 described part of the abuse of the complainant as follows:

You then committed further indecent acts with J. You told J to take off his pants and you started touching his genitalia with your hands. This is charge 3 on the Indictment. While this was occurring, you began touching your own genital area with your other hand. These acts occurred over a minute or two. This is charge 4 on the Indictment. Both charges 3 and 4 are Indecent Act charges. [my emphasis]

Now, George Pell is a man with only two hands. If he started touching the boy with his “hands”, then “while this was occurring” he would not have been able to touch his own genitals with his “other hand”. He would need three hands to do what the judge asserted. When a Quadrant reader alerted me to this, describing the scene as “surrealist nonsense”, I thought there must be an error in the transcript. So I replayed the video of Kidd’s remarks and found there is no doubt that he said Pell was touching the boy’s genitals with his hands, plural. Now, this is no slip of the tongue that doesn’t matter. The judge’s description of what happened at the time is the substance of Charges Three and Four against Pell which, as Kidd’s footnote assures readers, is “contrary to s 47(1) of the Crimes Act 1958 (as amended by the Crimes (Sexual Offences) Act 1991)”.

Moreover, if you read the response by the prosecution to Pell’s appeal on June 5–6, you find that Kidd’s terminology closely followed what the complainant, Witness J, originally told the jury himself:

In short, the jury certainly got it wrong about Charges Three and Four, which raises the obvious question among those of us who can still read plain English: what else did they get wrong too? Well, there’s more. Those who have followed this case closely in the press will be aware that, while all the above was supposedly taking place, Pell was doing something else with his hands too: he was pushing up, or pushing aside (depending on who you believe), his archbishop’s vestments involving several layers of clothing: not only his trousers and underwear but also an alb (an ankle length tunic with no opening down the front) and a chasuble (a knee-length robe like a poncho). Both normally required Pell to have an assistant to robe and disrobe him. Pell’s defence described them as follows: “the alb was tightly tied in place by a cincture (a rope like belt) which was also attached to a stole (a piece of material around the neck) and a microphone — meaning it could not be moved around the front of the body”.

During proceedings on June 6, President of the Court of Appeal, Justice Chris Maxwell, took issue with defence counsel Bret Walker’s claim that the acts attributed to Pell were “literally and logically impossible”. Maxwell said this might be true if someone was in New Zealand at the time the offences allegedly occurred but, given the timescales involved in the locale of Saint Patrick’s Cathedral — five or six minutes after the Mass concluded — they might be improbable but not logically beyond belief. Unfortunately, no one asked his honour whether a man with three or more hands might not be beyond logical belief too.

Historically, courts in the English-speaking world have relied upon the concept of “the majesty of the law” to impose both authority and respect for their institution. This always depended on deep traditions that were essentially theatrical props and gestures — wigs, gowns, titles, language, standing, seating and bowing. The televising of Pell’s sentencing and appeal has added a new dimension to the courtroom stage show. The audience can now watch it all from the comfort of their own home and, if they need to, can click their remote control for documentary backup on their screens.

Those of us who still believe the traditional notion of the law’s majesty remains an essential social pillar that helps preserve us from barbarism can only hope that the B-grade spectacle we have witnessed at so many places in the persecution of George Pell is an aberration and not a portent of some squalid, unwatchable future.

23 thoughts on “The Majesty of the Law”

The Devil in the Delusion