Anne Henderson on ‘Menzies at War’ 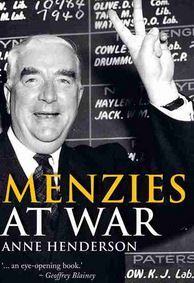 Anne  Henderson’s  Menzies at War is a long overdue counter to the entrenched left wing narrative that has held sway over so many years and her book is a pleasure to read. Hal Colebatch has written a masterful review in the July-August issue of Quadrant, so I shall confine my remarks to a few additional observations.

That Robert Menzies was not a political success in the period from 1939 to 1941 is not in dispute. But while he has to take some blame for his flawed personal relationships with a number of his parliamentary colleagues on his side of politics, there is little evidence that his critics in the United Australia Party (the predecessor of the Liberal Party) were motivated by much more than petty dislike and thwarted ambition. Likewise, the tawdry attack on Menzies by Earle Page, then leader of the Country Party, was not leavened by any higher policy consideration.  Similarly, some prominent media proprietors appeared more concerned with their self-interest as distinct from the national interest.  Looking back, one can only be astonished at the antics of Menzies’ critics when Australia was facing potentially its first existential crisis.

Menzies has been painted by the left as a supporter of Chamberlain’s appeasement of Hitler.  I would suggest that the Left’s control of the historical narrative has created a massive distortion of the context in which Menzies operated, both as a senior minister in the Lyons government and later as Prime Minister. Anne Henderson devastatingly documents the outright isolationism of the then Labor Opposition, led by John Curtin, in the late 1930s, and, indeed, even after the beginning of the war in September, 1939. She resurrects remarks about Nazi Germany by Curtin, which, if uttered by Menzies would have condemned the latter as outright pro-Nazi. No doubt the Left would prefer that Curtin’s inconvenient remarks be flushed down the memory hole.  In a broader context, both sides of politics were eager to avoid war. The devastating losses of the First World War occupied a large place in public consciousness.

Concern about Japanese aggression was at the forefront of an assessment of Australia’s defence options by the Department of External Affairs in March, 1937. Australia’s defence capability had been effectively gutted by the Scullin Labour government during the Great Depression. After the fall of the Scullin government, the Australian Labour Party opposed all efforts to strengthen our defences until after the declaration of war. In addition we should not forget that the highly popular Joe Lyons fully shared the pacifist sentiments of his then Labour colleagues and was only a very reluctant convert to rearmament in the late 1930s. In the face of Japanese expansion, the Department’s assessment underscored Australia’s concerns about Britain’s commitment to defence in the Far East and, in particular, the construction and fortification of the naval base in Singapore.

Another marker of the Australian government’s concern was its decision in May 1938, not mentioned in Anne Henderson’s book, to impose an embargo on the export of iron ore. Japan was the main customer of the iron ore which had been shipped from Yampi in Western Australia. While the Australian government made much of geological advice, which indicated a shortage of iron ore, the main unstated reason was strategic concern over accelerating Japanese arms manufacturing. 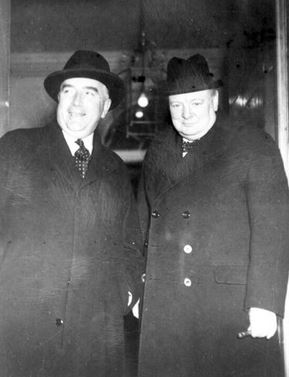 Against this backdrop, the Czech crisis was an unfortunate distraction. The last thing that Menzies and his colleagues wanted was British involvement in a European war at the expense of British commitment to the Asia-Pacific region to counter Japan. We may argue from a broader perspective that Neville Chamberlain pursued the wrong policy in 1938. However, it was not the job of an Australian government to second guess British policy in Europe.  It may well have made more sense for Britain to confront Hitler in 1938 rather than 1939. However, it is understandable that Menzies and his colleagues would be most reluctant to see Britain involved in a European conflict which would leave Australia vulnerable and exposed in East Asia.

Curiously, the critics of Menzies’ stand over Czechoslovakia in 1938 have pursued a Europe-centred view of Australian politics. We are left with the impression that the principal concern of Australian cabinets was with Europe, how to deal with Hitler. In this interpretation, Menzies supposedly saw the world from the perspective of Whitehall in London, and was scarcely distinguishable from a British politician.  This is the opposite of the historical reality. As Anne Henderson demonstrates, Menzies’ mission to Britain in 1941 was centred on his government’s perception of British weakness in and lack of commitment to the Asia Pacific region. This was the continuum of Australian government concerns since before the war, in particular, the weakness of British defences in Singapore. Contrary to the usual narrative, Menzies had a keen and realistic understanding of and concern for Australia’s geopolitical position.

Anne Henderson convincingly disposes of the myth that somehow Menzies was after Churchill’s job. I have no need to reiterate her refutation of this canard except to add that by the time Menzies arrived in Britain, Churchill was the official leader of the Conservative Party. Neville Chamberlain had died in November, 1940. It is true, as Andrew Roberts recounts in Eminent Churchillians, that Churchill’s position as Prime Minister was somewhat more tenuous whilst Neville Chamberlain remained leader of the Conservative Party and thus a perceived rallying point for those Conservative members who continued to oppose Churchill’s accession to office. By the time Menzies arrived, Churchill was institutionally secure and the grumbles from the likes of Lloyd George amounted to very little.

Anne Henderson’s book is an account of an authentic Australian, not an imitation Englishman. Like the majority of his compatriots, Menzies was both proudly Australian and proudly British in terms of inherited values and institutions. The story of his fall from office should not detract from his solid achievement in preparing Australia to wage a successful war, which John Curtin, at least, graciously acknowledged.

Christopher Carr is a frequent contributor to Quadrant and Quadrant Online

Good Reason to be Sceptical of Skeptics

Aesthete of the Week