Cubism – The spread of ideas

According to one of Australia’s leading scholars in the visual arts, the exhibition Cubism and Australian Art, at Heide Museum of Modern Art until 8 April 2010, is one of the most interesting and thoughtful shows to have been arranged in the last ten years. It is a demonstration of how an idea works its way through a community at the public or official level and at the practitioner’s level.

The great achievement of cubism is often described as adding the art of conception to imitation. The initiators of Cubism were Pablo Picasso and Georges Braque but they built on the advances of others, particularly Cezanne and their direct contemporaries such as Matisse. They anticipated the use of computer generated images, much loved by architects, where it is possible to present a building or object with all its surfaces and rotate the image so that different overlays appear. The early development of Analytical Cubism in 1907-1912 is very much in this abstract manner while still tied to the reality of objects. Arguably this triggered the abstractions of the Russian Constructivists as the Russian development occurred in much the same period and was initiated by Tatlin as well as being a reflection of some much broader influence in society. But analytical cubism gave way to collage, possibly initiated by Braque while Picasso constructed three dimensional objects that were described by his friend Gonzales as “drawing in space”. Then a myriad of Futurists, Orphists, Vorticists and others built on cubism while the founders went their own ways having started a revolution that is still with us. 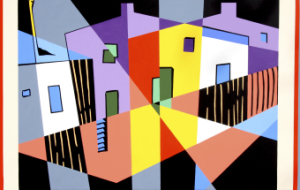 So how did Cubism get to Australia? The answer given in the splendid catalogue is that it arrived at two levels. The public became aware of Cubism through immediate newspaper reports and reproductions such as that of Marcel Duchamp’s Nude descending a staircase while artists went to learn directly from the masters and their disciples or indirectly from art schools particularly in England.

The British movement of Vorticists that arose from cubism and futurism lasted only a few years and was over by 1915 with the onset of the war. But the art and design schools, such as the Grosvenor School in the 1920s influenced many Australians and the legacy is to be found throughout Australia.

The exhibition is an echo of past “culture wars”. J S McDonald, the director of the National Gallery of Victoria from 1936 to 1941 was outspoken in his opposition to the new art of the late nineteenth and early twentieth centuries. In the 1930s Robert Menzies wanted an Australian Academy of Art to protect standards against modern innovations while Dr Evatt of course supported modernist painters.

The exhibition is also a reminder of “the one that got away”. This was James Mollison’s proposal to acquire for Canberra Grand Nu 1908 by Georges Braque. Grand Nu was Braque’s reaction to Picasso’s Les Demoiselles d’Avignon and as a forerunner of cubism would have become as remarkable in Australian collections as Blue Poles. But it was not to be. Malcolm Fraser was in a “blue hills not blue poles of Whitlam” moment and the deal died. A more contemporary example of art and politics is Kevin Rudd denouncing the photography of Bill Henson while Malcolm Turnbull possessed a Henson.

So you have an establishment with resistance to new ideas and you have the practitioners learning, using and making their own contributions. There are many powerful examples in the exhibition. An early Nolan, Factory 1942, with Cezanne-like flourishes, Tucker, Abstract Studies 1949, a magical Fred Williams The charcoal burners 1959 and Ron Robertson Swan, Steel Magnolia 2000, a helmet-like figure that is a masterpiece. All are part of the spacious setting where the gallery architecture complements the work.

Cubism seeded a torrent of ideas and movements and one hundred years later we have the inevitable post-cubists. At Heide the group of artists, Nolan, Tucker, Boyd, Blackman and Percival who established themselves in the 1940s and 1950s did so while American Abstract Expressionism was dominant yet their own work reflected the same roots as the American artists yet they chose a different path only rejoining the northern hemisphere stream when figuration returned in the 1970s perhaps triggered in the United States by Philip Guston.

Much critical analysis of cubism has resulted in opinions that are as many as there are artists. The catalogue nicely illustrates this with well chosen quotes. But the quote that best captures this is from the American artist Barnett Newman who said “Art criticism is to art as ornithology is to the birds”.

This exhibition is not to be missed.

Official disclosure: Tom Quirk was previously a chairman of Heide and and his aunt, Ethel Spowers, studied at the Grosvenor School.

The Putin Doctrine: Lies and Terror