Winners? History Isn’t So Sure

One of the more asinine charges leftists throw at conservatives is that they ‘are on the wrong side of history’. Thus, for example, do we so often hear CAGW true believers peddle this line when confronted with empirical facts and logical argument, such as the case recently put by Bjorn Lomborg regarding the futility of the Paris agreement.

Facts? Argument? Logic? Why bother with any of those when an argument can be “won”, at least by the standards and to the satisfaction of other leftists, by smugly dismissing those who disagree as being hopelessly out of step with changing times.

Opining on the same-sex marriage debate, Ben Esposito from Buzzfeed joined the throng of commentators pushing the ‘wrong side of history’ meme. And it is not just irredeemable activists for the progressive cause. Here is Chris Kenny, someone with whom I almost always agree: “On gay marriage Abbott was on the wrong side of history.”

‘The wrong side of history’ appears ad nauseam in any debate that pits progressives against conservatives, and is never more than intimidatory barracking, as in ‘You’re going to lose anyway so why not give up now and make it easier for all concerned’. It’s the unchanging overture to the symphony of triumphalist celebration which inevitably follows every gain for the progressive cause.

Malcolm Turnbull once was ‘on the right side of history’, according to media spruiker Michelle Grattan. As Zeg and Newspoll both agree, that is no longer the case. 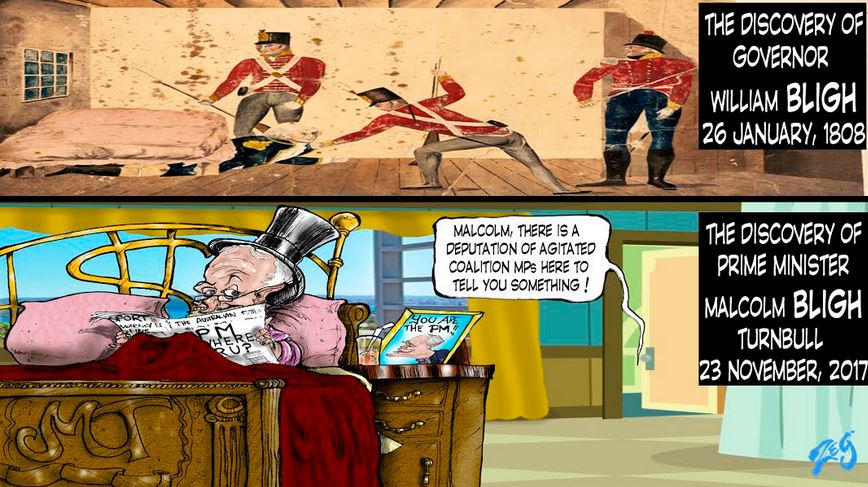 Alexander Kerensky wasn’t ‘on the right side of history’– Lenin Stalin and Trotsky were, the last soon finding himself on the wrong side of both history and an ice axe.

The imprisoned Adolf Hitler wrote Mein Kampf, which gained quite a bit of traction with the German people. The Austrian Corporal was ‘on the right side of history’, at least for a while.

There is no moral dimension to history.  The ‘right side of history’ just means the side that happens to be winning at any one moment. Sadly, as the Liberal Party’s bedwetting contingent so wetly demonstrates, there are too few defiant conservatives proud to declare themselves, rightly, on the ‘wrong’ side of history.

Ideology, Power and the Left