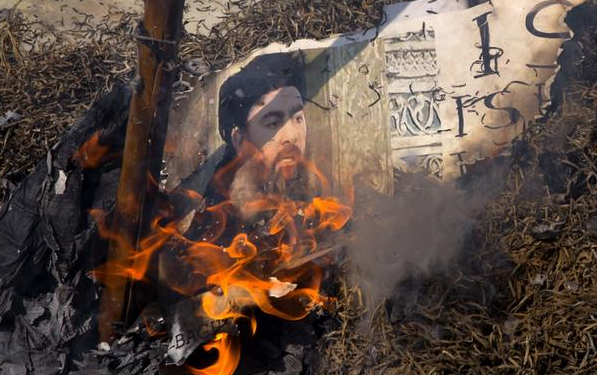 Ibrahim Awad Ibrahim Al-Badri was born on July 28, 1971, in Samarra, Iraq.  He was always religiously inclined, but was not a good student.  He claims he could trace his lineage back through the Al-Badri clan for 300 years but, more importantly, he laid claim to being directly related to the Prophet through Muhammad’s daughter, Fatima.  If it were true, it would go a long way to establishing his claim to possibly being the legitimate Caliph. In fact, this step required some considerable stretching of known facts, with implausible assumptions and guesswork to fill in the blank centuries that constitute most of his ancestry.

When an opportune time came, and to cover all options and establish his legitimacy to be the new Caliph, he adopted the name Abu Bakr al-Husseini al-Hashimi al-Quraishi al-Baghdadi.  This laid claim to all the territory controlled by several previous Caliphs, stretching from Jerusalem, through all of Syria to parts of Saudi Arabia and Iraq.  His last adopted name nominated Baghdad as the capital of this resurrected Caliphate.

Al-Baghdadi began his militant career in 2003 when he was appointed to lead the Sharia Committee of a militant Sunni group. Captured by the US Army, he spent most of 2004 imprisoned with about 20,000 others at Camp Bucca.  By collecting the most radical militants and their leaders in one prison, Camp Bucca became a jihadi university. Contacts were made and networked, sabotage and fighting skills taught, and inmates inculcated in the most radical strains of Islamic  ideology.

Due to his unassuming devoutness, quiet manner and lack of obvious aggression, Al-Baghdadi came to be regarded as a low-risk inmate and released.  He immediately rejoined a militant group and, through dedication and diligence, began to climb through the ranks of the insurgents.  Apparently, his US interrogators had not discerned that al-Baghdadi was a believer in the Sharia theory of murder and savagery.

The Theology of Murder and Savagery.

The ideological or religious roots of the barbarity of ISIS is too long for other than a brief summary in this article, but suffice to say that it can be traced to the beginning of Islam in the 7th Century.  For fundamentalist Muslims any deviation from the original literal texts is heretical and punishable by death.  Today, the purist Salafists advocate a 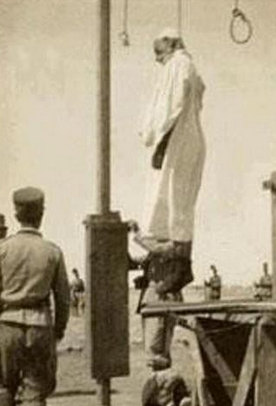 return to the lifestyle of the first Muslims.  Modernism is not for them.  This austere doctrine has spawned the even more radical Wahhabist movement that rules Saudi Arabia.  Since 1744, Wahhabism has provided the House of Saud with the spiritual, ideological, political and military basis for its international zeal in spreading Islam globally.  Wahhabi Salafism provides the basis for Saudi Arabia’s funding of jihadism in the region and elsewhere.

Sayyid Qutb brought Wahhabism to the 20th century generation of jihadist militants, resulting in the foundation of al-Qaeda and its kind.  For Qutb, any deviation by another Muslim from Wahhabism made them an apostate or kuffir (infidel), making it obligatory for a ‘pure’ Muslim to kill them.  Qutb was hanged in 1966 (left) on charges of plotting to assassinate President Gamal Abdel Nasser.  Qutb’s influence is a core foundation of ISIS and the other extreme jihadist groups, having provided the theology of murderous jihadism.  All now required was a cause and a battlefield.

In a desperate attempt to regain control, al-Baghdadi in April 2013 declared the foundation of the Caliphate and ISIS, while also unilaterally announcing that the al-Nusra Brigade was under his command.  This explains another of those Byzantine puzzles as to why ISIS preferred to fight and defeat the al-Nusra faction, rather than Assad when they began their invasion of Syria in late 2014!  But first things first: ISIS had another priority, as al-Baghdadi had made a big call by declaring that Baghdad was to be his Caliphate’s capital.

In the first few months of 2014, ISIS (which had been fighting and losing battles to other anti-Assad reb 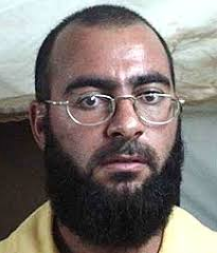 Al-Baghdadi at about the time he was released from US custody.

el forces), aligned themselves with the CIA and began to reassemble its forces in northern Syria.  They also tentatively invaded and held two small parcels of territory in northern Iraq.  They recruited extensively, both locally among refugees and internationally through Social Media and the internet.  I joined one of their sites as a follower!

In June 2014, in a brilliant blitzkrieg operation spearheaded by convoys of hundreds of Toyota HiLux vehicles, ISIS fighters swept out of Turkey and western Syria and across northern Iraq, capturing Samarra, Tikrit, the Kirkuk oil fields, Mosul and extending their territory as far south as Ramadi, just 60km from Baghdad.

In an unseemly rout, five Iraqi divisions broke and ran before this host of lightly armed terrorists, usually without putting up any resistance.  Yet these heavily armed Iraqi Army divisions both outnumbered and outgunned the advancing insurgents.  One complete Brigade of 1,750 men surrendered at Tabqa Airbase and were gruesomely murdered to the last man by machine gun, AK-47 fire, beheadings and burial alive in a massacre videoed and distributed for propaganda purposes.  ISIS revelled in their blood by posting hours of these killings on the internet, with videos showing prisoners being taken away and shot or otherwise killed by the black-clad militants.  This set a pattern, with hundreds of Yazidis killed shortly thereafter and their women enslaved.  Seventeen girls who refused to become sex slaves were videotaped being burnt alive in a cage.  Thousands are still missing.  Al-Baghdadi was implementing  barbarism in support of religious theory by ruthlessly applying it in practice

ISIS now controlled a huge area of Northern Iraq and were within striking distance of Baghdad.

A stunned world had just witnessed a lightly armed ISIS force of less than 30,000 ‘amateur’ fighters vanquish a well-equipped modern force of over 100,000 soldiers that had been building and training for up to six years.  However, this was the high point of ISIS in Iraq as the still numerous Iraqi Army, now supported by highly motivated Shia militias and the Iranian Al-Quds Brigade deployed to defend Baghdad, while in the north the Kurdish Peshmerga fought back hard to hold slivers of their homeland along the Turkish border.  As Baghdad was out of reach, Al-Baghdadi now looked for an easier target, so ISIS finally turned its attention to northern Syria.

One compelling mystery that attracted the media and the public’s attention was how ISIS was able to obtain hundreds of identical, brand-new 4WD Toyota utes (below) to spearhead their invasion of Iraq.  Testimony to a U.S. Congressional Committee revealed that both the US and British governments, acting through the State Department, the US Army, its allied military forces and intelligence agencies, had bought them using Saudi Arabian money and provided them to ISIS through Turkey for use against the Syrian Government.  In effect, the Western nations were complicit in supplying and paying for vehicles and weapons for the use of brutal terrorists to defeat a legitimate government in Syria, with Turkey providing a safe base and logistic channel.  This subterfuge effectively by-passed the authority of Congress, but the plan went astray when ISIS used these assets against their handlers own client and ally in Iraq. 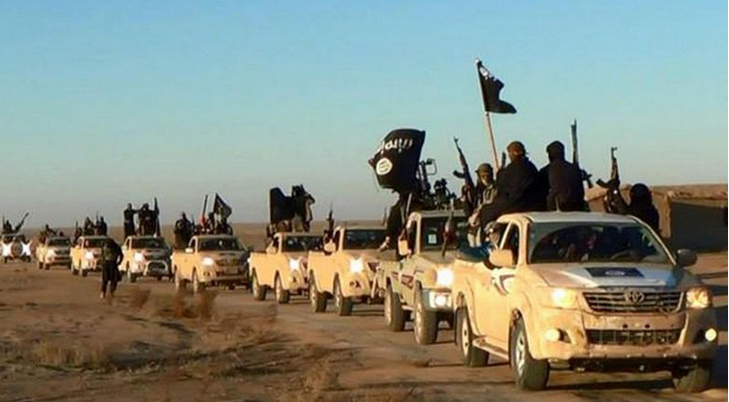 In August 2014, ISIS issued its first video showing the Englishman, “Jihadi John” beheading American journalist James Foley.  Foley was soon followed by a dozen other Westerners.  The endless barbaric killings were a core feature of their philosophy, one that continued right up until their last day.  When Berghouz y was captured on February 21, 2019, Syrian soldiers entering the village found the beheaded bodies of 50 female slaves, their heads  thoughtfully collected in a garbage drum.

Al-Baghdadi was not just a brutal, homicidal lunatic, but an Islamic scholar who followed and applied the doctrines of an extremely vicious branch of Sunni Islam.  There are several million fellow-believers, so this barbaric cult will not end with his death.  Within days, a new Islamic State leader emerged and the group’s planning of further murderous attacks continues as before.

“The ideology continues, the resonance continues, and that is a strategic concern for us,” Russell Travers, the acting director of the US National Counterterrorism Center, told a congressional hearing on global threats.  The killing of al-Baghdadi by U.S. forces in Syria is a “significant” development, he said. But, as with al-Qaeda, ISIS has a “deep bench” of figures ready to step in to his place for the glory.

Death in a Dead End …

Al-Baghdadi escaped from Berghouz and made his way to Northern Syria.  The premature withdrawal of US airpower and support allowed the remnant bands of ISIS fighters to reform and capture territory in Idlib Province in June 2019, just four months after their destruction and dispersal.  In yet another bizarre twist, the Turkish Army supplied armoured vehicles and weapons to ISIS (who had killed dozens of Turkish soldiers) to fight the Kurds!

By August, they are reputed to have gathered up to 6,000 fighters to defend and expand their territory in Idlib Province.  It is probable that a narcissist like al-Baghdadi believed he was on the comeback, when in fact he had placed himself on a dartboard as the 100-point bullseye.  All that had to be done was to locate him.  When that intelligence task was achieved, the finishing touches became a purely military operation — one that demonstrates how far America’s military has come since the fiasco of Jimmy Carter’s Iranian hostage ‘rescue’.  Within an hour of their landing, al-Baghdadi’s bodyguards were dead and he was trapped.  His final murders, according to reports, came as he suicided, taking a pair of wives and two  children with him.

What of those with Australian citizenship?

As the ISIS philosophy of murder and barbarism is clear, it must be seriously doubted that they can be de-radicalised.  Yet “bringing them ‘home’” is the policy of some political parties and individual politicians.  By my reckoning, these people are fools lacking both hindsight and empathy for the thousands brutally murdered by ISIS. It should come as no surprise that they have even less foresight as to the consequences of deliberately establishing a Centrelink-funded ISIS branch.

In short, they have forfeited their right to be Australians or in Australia, so it is time to do the right thing, rather than the expected soft-headed thing and leave them and their spawn to whatever fate befalls them.

Alistair Pope has worked in Central Africa, North Africa, throughout the Middle East and many other places.

Get Your Indigenous Healing Creme