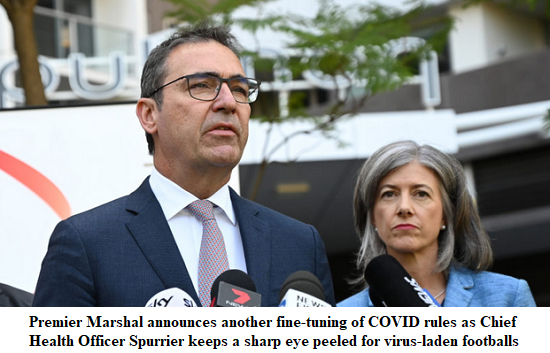 South Australia is seen by the rest of the continent as a bit of a sleepy backwater politically but the upcoming state election on March 19 could change that perception while providing pointers for the federal election due in May.  For all those South Australians who are done with the COVID comic opera and all its farcical business and employment restrictions, vaxx coercion and mask mandates, something could be brewing in two weeks time here in SA.  What is the electoral state of play, COVID-wise, and what are the contestants saying about COVID policy?  Will the virus madness win at the ballot box, or will sanity regain ground lost over the past two years?

Labor ahead at the turn

The latest Newspoll shows Labor leading 53-47 for the House of Assembly after distribution of preferences.  Peter Malinauskas, the Labor leader, is preferred premier 46-39 over the incumbent Liberal, Steven ‘Marshmallow’ Marshall (so nicknamed because of his lack of any commitment to discernible principles).  Malinauskas, former head of the Shoppies union, boasts a disapproval rating of only 31%, meaning is disliked chiefly by rusted-on Liberal voters, whereas Marshall’s 47% disapproval score speaks of a wider disenchantment. By all the conventional psephological tea-leaves, this points to a Labor government preparing to select its ministerial office furniture and curtains.

Some of Marshall’s waning popularity stems from public disquiet with the state’s COVID hysterics unhappy about loosening any of the chains an ultra-cautious Marshall has eased, somewhat and slightly, with all the swiftness of a snail after a heavy lunch of pesticide.  The government’s decision to reopen SA’s borders, closed for two years, against SA Health advice, was disliked by 51% of voters fearing they would be overcome by a glorified cold called Omicron.

Marshall is also being squeezed by a growing anti-restriction/anti-mandate mood amongst those who have moved on to the “it’s endemic, let’s just live with the virus” page for some time now.  Marshall, a ‘Moderate’ by faction and moderate by nature, has nevertheless been responsible for all the terrible damage from the state’s wild experiment with “beating the virus”, as he ominously put it after the absurd ‘curve-flattening’ prelude. Senseless lockdowns, ‘social distancing’ restrictions, venue capacity limits, quarantining the healthy through an unreliable testing regime, school closures, bans on singing and dancing, bans on drinking whilst standing — that’s any number of burrs under the saddle of voters who, in particular resent the ever-changing, illogical and ludicrous rules that dictate what we are allowedm to do, and not allowed, on pain of criminalisation.

How ludicrous? Consider this: if you need a colonoscopy in South Australia to screen for potential bowel cancer, you must be fully vaccinated, present two negative PCRs and wear the goofy mask. Recoil at this inanity and you might get to die from undetected colorectal tumours. This is what is laughingly known as the wisdom of ‘public health’ bureaucrats.

It has all been so infantilising and humiliating, so business-crushing and job-shedding, and Marshall has been at the helm of it all either directly, or, in his preferred modus operandi, at arm’s length by allowing businesses and services to mandate whatever the hell they like (‘Get the vaxx or get the axe’ mandates, vaxx passports, masks, etc.)  The timid Marshall made himself the hostage of COVID hysterics and is now too fearful to end restrictions and thus be accused of recklessness. The irony is that those masked-up COVID panic merchants probably won’t vote Coalition anyway, being more likely to be commissar-loving, pro-restriction Labor types anyway.

Marshall also has a problem with his madwoman-in-the-attic, Chief Public Health Officer Nicola Spurrier, who has frequently ventured downstairs to deliver demented ravings such as “Duck and do not touch that football” (or  pizza boxes) because the virus will get you. More recently she scolded New Year’s Eve would-be revellers for daring even to think about celebratory gatherings when what was required as the “absolute quietest New Year’s Eve anybody has ever had”.  This is the authority who, when people question the harshness of her measures, replies with Winnie the Pooh wisdom in her condescending, kinder teacher’s way. This is, word for word, actually what she said:

“Piglet says to Pooh, ‘Pooh, how will we know if our pandemic plan is working?’ And Pooh says to Piglet, ‘Because they’ll all say we overreacted’. And Piglet says, ‘So, does that mean when we’re right, everyone will say we’re wrong?’ And Pooh said, ‘Welcome to public health, Piglet’.

Intellectually insulting and unbearably twee at the same time!  And remember, this is both the state’s most senior public health official and the woman to whom Marshal has deferred time after time after time.

All this has got on a lot of people’s wicks after two years.  From a stellar approval rating in the 80%+ for how the Marshall government was handling COVID a year ago, that has now slumped to somewhere in the 50%, or lower, region.  People are moving on – and around one in five are parking their votes with parties that better reflect their disenchanted mood on COVID policy and its political managers.  In polling for the Legislative Council (where minor party votes really matter) by the Australia Institute, fully 17% of voters (in addition to Pauline Hanson’s One Nation, with 5% of the vote) are giving their first preference to Independents/Others.

It is likely that all the fervent pro-restriction voters are politically invested in either the Liberals, who have had carriage of the restriction policies, or with Labor, as Malinauskas has provided bipartisan support, saying, just three months ago, “under the leadership of Grant Stevens and Nicola Spurrier, South Australia has had an outstanding health response to the COVID-19 pandemic”. Stevens, for the record and benefit of non-South Australians, is this state’s Police Commissioner in overall charge, as state co-ordinator, for the enforcing Spurrier’s edicts and delusions of virus control.

The Clive Palmer/Craig Kelly UAP is not running in the SA election but there are a number of other pro-freedom parties apt to garner the COVID-weary vote.  Below is a form guide laid out in order of profile and vote magnetism.

One Nation’s form on COVID must be rated as excellent.  The party is solidly against lockdowns, vaxx mandates, vaxx passports, borders closures, the whole COVIDiocy.  They want a federal Royal Commission, one that gets to the heart of what has been the greatest and most disastrous public policy failure in generations.  Hanson walks the talk by participating in the grass-roots protests.

Family First is on the Christian right of the political spectrum and has been relaunched by two former Labor ministers (Jack Snelling and Tom Kenyon) and a former Liberal MP (Deepa Mathew).  Family First is opposed to mandatory vaccination, vaccine passports, lockdowns and “restrictions to our liberty”.  They oppose increasing the government debt to fund the lunatic expenditure levels on failed pandemic measures.  They want to see a whole-of-society risk assessment for any future pandemic policy response.  They want rigorous testing to “assess the COVID vaxx safety and efficacy”.  “Above all”, Family First says, we “must be vigilant that the COVID-19 pandemic is not used as an opportunity to entrench unwarranted or unjustified government intrusion in our lives”.  All boxes ticked, and an extra one too: Quadrant contributor Daryl McCann is contesting the seat of Bragg (as below). 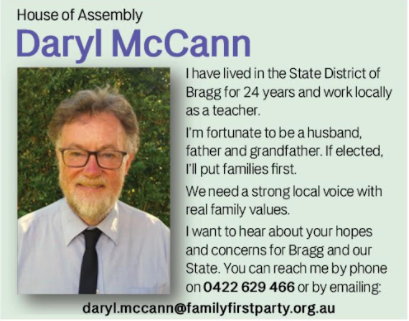 The Liberal Democrats (or ‘Liberal Democrats – less government more freedom’, to give them their full electorally-registered name) fly the banner of “individual liberty, free markets and small government in South Australia”.  They also want a state “free from COVID alarmism”, a desire which encompasses ending school closures, lockdowns, mandatory vaccinations, vaccine passports, mask mandates, border closures, contact tracing, QR codes, mandatory testing and self-isolation. They demand an end to the state of emergency which has allowed all these measures to be undemocratically imposed (South Australia’s COVID State of Emergency has been continually renewed, every 30 days, since early 2020).

One sticking point, however, is that the Lib Dems believe private property owners and businesses should be able to set their own conditions of entry and conditions of employment.  This could mean that the Lib-Dem post-COVID landscape could look very much like the current COVID landscape, with some businesses requiring vaxx passports for customers, vaxx mandates for employees and masks for all.  When Marshall off-loaded such decisions onto the private sector, many businesses adopted them with rapidity. For example, I had to scramble to find a new dentist when mine went all COVID-apartheid on me).  Granting such liberty to business owners is a license to discriminate – we are not talking Christian cake-makers here whose conscience precludes them baking a ‘gay cake’. We are talking heath and other essential services.

The Lib-Dem’s policy of businesses setting their own rules is also scientifically illiterate.  Vaxx mandates and passports don’t work because the vaxxes don’t work to stop infection or transmission, so the mandates and passports are merely “COVID theatre”, to quote Florida governor Ron DeSantis, designed to coerce uptake of a rush-produced, experimental and inadequately tested gene-therapy drug.  Even if the vaxxes worked as initially advertised, their policy accessories (mandates and passports) remain unethical in that they force medical interventions on people at the risk, say, of losing one’s job or being denied service. This aspect of the Lib Dem’s COVID policy is neither liberal nor democratic.  More work needed, team.

The Australian Family Party is the ideological property of former (failed) Liberal candidate, and (successful) Family First candidate Bob Day.  They only have one sentence on COVID on their website, but what a gloriously direct and simple sentence:

SA Best is basically the old Senator Nick (‘No Pokies’) Xenophon party minus Nick Xenophon.  They applaud the Liberals’ economy-strangling and liberty-crushing management of the pandemic (“those in charge of making extremely tough decisions did a great job under enormously difficult circumstances”) but at least they want to see a state Royal Commission into the handling of the pandemic, including examining the wider societal impact of any pandemic response on “our economy, industry, jobs, education, aged and disabled care, law and order and lifestyle choices”.  The party is basically on board with the whole thrust of shutting down society and disrupting lives as part of ‘pandemic-proofing’ the state.  The Ex X-men still poll at 5%.

The Nationals in SA are just Liberals with Akubra hats, whilst the rest of the ‘Others’ have nothing at all to say on COVID or its response, indicating their acceptance of the last two years of stunning, damaging nonsense.  Steer well clear of the Animal Justice Party which, in Victoria, was part of the crucial Upper House bloc of minor parties shoring up Dan Andrews’ dictatorship throughout.

So, there are plenty of good options for the voter who wants an end to the COVID baloney.  Bipartisan orthodoxy will still win overall, of that there is little doubt, but for a return to sanity, economic health and the old Australia we all liked so much, a seat or two in the upper house for the anti-restriction/mandate parties wouldn’t go astray

10 thoughts on “A COVID Guide for South Australia’s Election”

A Five-Step Program to Beat COVID

COVID: The Lessons We Dare Not Forget