When Inflexibility Becomes a Guiding Principle 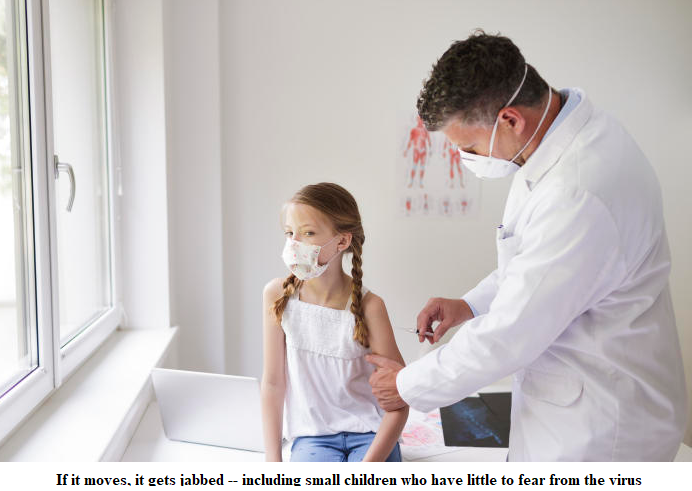 Imagine the scene. After two years of taking the same medication and without any improvement in your health, your doctor says she didn’t prescribe the medication to make you better but to ensure that you appeared kind to other people. That’s the situation we find ourselves in after two years of wearing masks, getting vaccinated, enduring lockdowns, not travelling, and disinfecting everything in sight. In other words, people not thinking about the best way to manage the pandemic but, rather, virtue-signalling on social media how good they are. It’s a definitive sign that most people can’t think or evaluate evidence but need their opinions and actions mediated by authority figures.

The other side of the coin is people who won’t listen to any evidence, no matter how persuasive. At least the latter, though, have an excuse. We’ve been lied to so many times by an Establishment ‘nudging’ us in the right direction that nobody with a semblance of intelligence should listen uncritically to anything that’s said about the coronavirus.

All the pillars of the official response to COVID-19 have proven to be not only ineffective against the pandemic but, in many ways, to simply not work. Masks, for example, have a minimal-if-any impact on the spread of the virus. Numerous meta-analyses of the efficacy of mask-wearing have shown only insignificant levels of protection. The World Health Organisation and the US Centers for Disease Control and Infection cite one study, among many with the same message, which states that ‘face masks did not support a substantial effect on transmission of laboratory-confirmed influenza’. One Australian study, which included both gold-standard surgical N95 masks and no masks, found a ‘significant benefit’ against catching COVID-19 among those who wore masks, but the results were ‘confounded’ when hand washing was included in the analysis. Mask wearers reported washing their hands more often than non-mask wearers.

Disinfecting surfaces also doesn’t work. COVID is transmitted by air. People become infected by breathing in aerosols, which are often so small that they float in unventilated spaces. Some people have contacted the disease by touching surfaces but the percentage of those who became infected this way is minuscule in comparison to the majority who have caught the virus.

Lockdowns are also ineffective in stopping the spread, at least when we evaluate the difference in transmission and deaths in separate jurisdictions. Sweden, which didn’t impose an extensive lockdown, sits in the middle of European statistics in the severity of infections and deaths. It should have experienced, at least by the rhetoric shouted in its direction, Armageddon by now. It hasn’t happened. The same goes for the US states of Florida and Texas, which have equal or lower rates of infection and death to California and New York, both of which imposed lockdowns that have been almost medieval in their approach to contagion.

Vaccination has also not been the magic bullet that the Establishment said it would be. We were told that the disease stops when you are vaccinated. The inoculated, they said, would be protected and couldn’t spread the virus to others. US President Joe Biden said in July 2021 that ‘You’re not going to get COVID if you have these vaccinations’. This is not true. Israel has instituted a fourth vaccination on its population and it hasn’t stopped either infection or death. This is not to dismiss out of hand that vaccination against COVID is bad or unnecessary — the jury remains out on that — or that it doesn’t have positive effects. But the fact remains that mass vaccinations hasn’t done what we were told it would do.

The nineteenth century French economist, Frederic Bastiat, wrote a seminal essay, That Which is Seen, and That Which is Not Seen, in which he explained something that is obvious when pointed out, but which most people never consider: that the results of bad economics are invisible. The house, factory or hospital are not built, the medical innovation is not created, and the toys you would buy your children don’t exist. The same can be said for the effects of the pandemic. We’re concentrating on coronavirus infection and death rates and ignoring the effects on other measures of wellbeing, including people not receiving medical care for other illnesses, which also cause death.

The biggest lapse in morality for me, though, has been the silence about the effects on people in poor countries from lockdowns. Economics is not GDP numbers divorced from reality. It’s real life and bad economics kills. People who live on two or three dollars a day cannot afford, because it’s life or death for them and their children, to playact virtue-signalling nonsense on social media. To give one example of pervasive thoughtlessness: only healthy economies can donate to poor countries. When we turn our economies off, as we have done over the last two years, there’s nothing leftover to help those in need. They just die. Out of sight and out of mind.

The moment I became suspicious of the official response to the coronavirus was when I discovered that anyone in the UK who caught it and died was counted as a ‘COVID death’, even if they had recovered from the virus and relatively soon thereafter died in a car crash. Whether this was bureaucratic ineptitude or something more sinister, the result was the same: an increase in societal hysteria. COVID is bad enough as it is without official statistics making it appear even worse. My critical antenna also went into overdrive when every critic of the official response was silenced by government, Big Tech, and the medical establishment. The COVID censorship was at the same level of authoritarianism meted to those bigots who say that people with penises aren’t women. In other words, something peculiar was happening, none of which has yet to be explained.

What many people dimly understood a few months into the emergency has come to pass: shutting down the world to stop a pandemic is analogous to the courtiers of King Canute not understanding that he, or they, can’t stop the tide. This made sense in the early stages of the disease, when we didn’t know much about the virus. But that moment has passed a long time ago, and the inflexibility of the governing class bespeaks stupidity. Ralph Waldo Emerson said that ‘a foolish consistency is the hobgoblin of little minds’ and few moments in recent history have proven the wisdom of his adage as the official response to the coronavirus pandemic.

This is what should have been done: protect the old, the vulnerable, the sick, and people with comorbidities  with all the power and wealth of the State. Then vaccinate as many people, who want to be vaccinated, in as short a period as possible. People can voluntarily social distance, wear masks, or, I’m being facetious, bathe in essential oils, get exotic massages, or have their backs cupped. It’s up to them. Why? Because fewer people will die in the long run. And also because there is no rational alternative which won’t continue destroying more than it saves.

16 thoughts on “When Inflexibility Becomes a Guiding Principle”