A Remedial Lesson in Climate Education 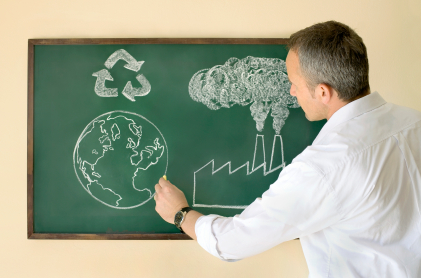 I am a mathematics teacher in a well-to-do school.  Next year will be my fiftieth year in the profession.  I am well known around the school as someone who hasn’t fallen for the CO2 swindle, although I have no problem with the notion that the various climates around the earth are changing in various ways.  Being a mathematics teacher, the notion the mainstream media runs, that the earth has “a climate”, appals me.  How can we can “average” the multitude of climates around the earth and come up with “the climate”? It does not compute.

I often come across students and teachers who express concern over climate change and the need for humanity to do something about it.  I always begin such conversations with the question, “What’s the problem?”  They always, eventually, get down to the fact that it’s carbon “pollution” and how we must stop burning fossil fuels and embrace renewables in order to save the planet. Again, its the MSM spin. My next question is how much CO2 is in the atmosphere?  I have yet to come across anyone at school, when asked that question, who knows that it’s a bit above 400 ppm.  After informing them of this particular fact, I ask if they know how low the CO2 concentration can fall  before life on earth ceases.  Again, I have yet to come across anyone at school who knows that once it drops to about 180 ppm, we are in trouble.

My third question after that is this: if 400 ppm is too much and 180 ppm too little, how much CO2 is just right?  Again, no one has been able to answer this, as no one on the planet knows the answer.  I then try to present students (adults have usually stopped listening by that stage) with some perspective on 400 ppm. I ask them to think of a million molecules of atmosphere as a million one-dollar coins placed adjacent to each other in a square.  The square would be 25 metres by 25 metres, about the size of a school’s small gymnasium. The 400 ppm of CO2, if represented by those dollar coins, would make up a square 50 cm by 50 cm. What’s more, since humanity is responsible for only about three per cent of the CO2 in the atmosphere, the human contribution to those one million coins would be 12 coins.

What Bill Shorten, Labor, The Greens, the media and others are saying is that if we pay billions of dollars in subsidies — think carbon tax, etc — they will remove six of those twelve coins and thereby make the climate stay the same.

Scott Morrison and the LNP are saying that if you want to pay a lesser number of billions of dollars, they will remove three of those twelve coins and make the climate stay the same.

I then try to get the students who are prepared to listen to me to get some idea of how big we are compared to the atmosphere.  I ask them what they think the average weight of a human being is.  Most come up with around 70 kg.  I offer them 66 kg and they are prepared to accept that.  I then suggest that since we just float in fresh water, our density is about the same as that of fresh water.  Most seem happy with that hypothesis.  Since a kilogram of water occupies a litre, that means the average volume of a human being is about 66 litres.  If you multiply 66 litres by the number of people on the planet, i.e. 7.5 billion, and convert to cubic kilometres, you get 0.495 cubic kilometres.  That is just under half a cubic kilometre.  So if we had a big box, one kilometre long by one kilometre wide and 500 metres deep, then all the people on the earth, in theory, could be packed into that box.  Then I let the students know that the volume of the atmosphere, the usable bits, is about 4.2 billion cubic kilometres.

Just one of those cubes would be represented by humanity.

By this time the students are usually starting to see our insignificance in relation to the whole planet, even if I haven’t been able to convince them that CO2 isn’t the satanic molecule the MSM purports it to be.

One particularly open-minded geography teacher usually invites me into her senior class for a guest appearance each year, during which I deliver much the same mathematics as described above. During the lesson, I try to impress upon the students that they should not believe a word I say, but check what I say and see if it is true. I say they should do this with all of their teachers. If they have blind faith in everything they hear from their teachers, they will never learn anything.

Needless to say, although many of the students at my school spout the religion of climate change, with the creed’s Satan being CO2 emissions from fossil fuels, not one of them actually practises the faith.  They are all avid consumers of Google’s offerings. They all turn up to school in their parents’ fancy SUVs. We have a three-week break in the middle of the year and many head off to the northern hemisphere with little regard for their carbon footprints. They all use air-con in summer and heating in winter, and so on.

You could say are non-practising devotees of the Gaia religion.

17 thoughts on “A Remedial Lesson in Climate Education”