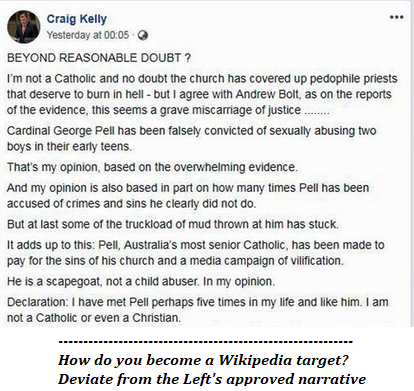 Since my unsuccessful attempt to have some balance injected into Wikipedia’s article on Bruce Pascoe’s Dark Emu, I have become rather interested in its machinations in general.  After all, most of us consult Wikipedia on a regular basis.

Seeing that Craig Kelly has been in the news of late I decided to see what Wikipedia had to say about him.  I will concentrate on just one aspect of his Wikipedia entry.  The following editorial discussion is illuminating:

Editor Dolphin: In the Section Craig Kelly (politician)#Positions we list a number of topics on which Kelly has made public statements that show he is out of step with majority public opinion or matters of fact as accepted by subject matter experts. One of these topics is the conviction of Cardinal Pell. Pell’s conviction was overturned on 7 April 2020 by the High Court of Australia but the paragraph in this article appears not to have been altered significantly since that date. It is therefore anachronistic.

I suggest the Section titled “Positions” should remain devoted to Kelly’s eccentricities. Kelly’s position on the Pell conviction proved to be more correct than incorrect so I suggest it should have been removed from ”Positions” sometime after 7 April 2020. Alternatively, the paragraph on Pell’s conviction should be substantially amended to acknowledge the High Court’s decision, and to present it as an example of Kelly going against the conventional wisdom and getting it right.

Editor Dolphin: Can you point to a reliable source that supports your view that “Pell was acquitted because of a technicality”? (To many readers and Users your view will look suspiciously like your POV.) There is a broad principle that an accused person is innocent until the court has finished its process, after which the person is either guilty or not guilty. Courts in general, and appeal courts in particular, will determine that the accused person is either guilty or not guilty: such courts do not declare that an accused person is innocent or that a convicted person is innocent. Appeal courts might speculate that a convicted person might be innocent and so should be acquitted, but those courts will never confer the status of “innocent” on a person; it is not a formal legal term applied to the accused (or the applicant in an appeal court). From a legal perspective, Pell is just as much “not guilty” as Lindy Chamberlain.

Editor Ratel: It’s right there in the judgement: “In their judgment, the judges said with respect to all five charges that, “Making full allowance for the advantages enjoyed by the jury, there is a significant possibility … that an innocent person has been convicted.”” So the possibility that he is innocent means the jury convicted him wrongly. It’s still not an exoneration by any means.

Editor Ratel: No, that’s not OR, @Dolphin51:, that’s the considered opinion of some experts, e.g. [2]. Tip: best not to quote WP policies to old editors, it’s just annoying.

Editor 211.30.238.60: In regards to “list a number of topics on which Kelly has made public statements that show he is out of step with majority public opinion or matters of fact as accepted by subject matter experts” — no, the section doesn’t. The section lists his positions on topics (e.g. the Luxury Car Tax being a possible example of a popular move, making cars more affordable – also the fuel excise decrease proposal). As Kelly expressed his position on Pell’s conviction and it was covered by reliable news sources, the section on Cardinal Pell should remain in the article.

Editor Ratel: I tend to agree with Dolphin51 inasmuch as we are recording his notable opinions and positions. Many conservatives backed Pell and disagreed with the conviction, so that’s to be expected from a right winger like Kelly. However, I’ll follow consensus and reinstate if any other voices back you.

Editor Dolphin: For the record: User:Ratel has removed the sub-section on the conviction of Cardinal Pell – see the diff. I think that is a good move and I thank Ratel for doing so. Kelly’s position on Pell was notable and significant prior to Pell’s win in the High Court; since then the situation has been reversed and Kelly’s position is no longer particularly notable or significant – for example, every judge, solicitor and barrister in Austaralia is expected to show respect for the High Court decision and to acknowledge that Pell is not guilty. Similarly, J. Mark Weinberg, a member of the Victorian appeal court that heard Pell’s initial appeal, hardly a “conservative”, concluded that the conviction was unsafe. So it is no longer appropriate for Wikipedia to state or imply that Kelly is a member of a small and marginalised group who are willing to say Pell is not guilty.

The sophistry demonstrated above by Dolphin beggars belief. Firstly, Dolphin claims that the article specifically ‘lists topics on which Kelly has made public statements that show he is out of step with majority public opinion or matters of fact as accepted by subject matter experts’.  These come under the heading of ‘Political Positions’. It is telling that Kelly’s views on Cardinal Pell’s conviction were regarded by Wikipedia editors as ‘political’.   That says more about them, than it does about Kelly.

To completely excise Kelly’s beliefs regarding the Pell persecution from the article is brazen political manipulation, something that Wikipedia supposedly abhors.  When it was – purportedly – believed by the majority and/or subject matter experts that Pell was guilty, it was ‘notable’ that Kelly believed otherwise.  But it is now not notable that, despite going against ‘majority opinion’, Kelly was eventually proven right?  Of course, you can understand their problem.  If Kelly was right about Pell, on what other of these unpopular positions might he also be right?  The efficacy of hydroxychloroquine in treating the China virus, for example?   Even as I write, the gnomes, sorry, editors have been hard at work recording the latest findings against Kelly. As the evidence for hydroxychloroquine and ivermectin eventually becomes incontrovertible, will they again decide that Kelly’s views are no longer relevant and expunge them from the article?

This topic then prompted me to have a look at the Wikipedia article on Cardinal Pell. It’s a much longer article and it is not possible to examine it in detail here but one entry leapt out of the introductory section at me.  See if you can spot it:

…Pell set up the “Melbourne Response” protocol in 1996 to investigate and deal with complaints of child sexual abuse in the archdiocese. The protocol was the first of its kind in the world but has been subjected to a variety of criticisms.

In 2020, the High Court of Australia overturned the County Court of Victoria’s 2018 conviction of Pell on charges of sexual offences and set aside the orders of the Victorian Court of Appeal rejecting appeal.  Pell remains under separate investigation by the Holy See’s Congregation for the Doctrine of the Faith for these allegations of abuse….

Yes, of course, I knew you’d get it – the gratuitous reference to the Congregation for the Doctrine of the Faith:

Pell remains under separate investigation by the Holy See’s Congregation for the Doctrine of the Faith for these allegations of abuse.

In the article’s ‘talk’ page, there was some discussion, amongst the editors, about retaining this sentence but, inevitably, those arguing for its removal lost out. I have been unable to find any reference to the Congregation announcing the termination of this investigation, but even the most partisan of editors, if they had done any homework at all, must know that retention of this sentence is seriously misleading and can only have been contemplated to cause continuing harm to Cardinal Pell’s reputation.  The implication of this sentence is that the Congregation is conducting its own investigation into the allegations of the choirboy, undeterred by the High Courts’ seven-nil quashing of the verdict.

Nothing could be further from the truth.  This investigation was set up as a consequence of the original guilty verdict, to examine the circumstances of the alleged offences and to determine the appropriate administrative penalty within the Church, for example if Cardinal Pell should be defrocked.

Now that Pell has been acquitted of all charges and has been welcomed back to the Vatican, to suggest that he is still under investigation by the Church is ludicrous.

Wikipedia is a useful resource and its editorial protocols are detailed and comprehensive.  But its governance is very opaque to the uninitiated and a very disturbing herd mentality seems to pervade editorial discussion on any controversial topic.   Wikipedia needs to take serious stock of how its protocols are employed in practice.  This is not the last you will hear from me on this subject. I will be continuing my small efforts in these pages to prompt them in this direction.

What the ABC Decided You Didn’t Need to Know