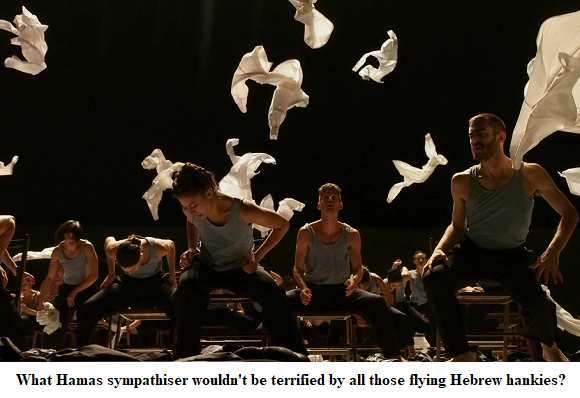 Quadrant readers, I should hope, will be unbothered by Tom Ballard’s absence from the Sydney Festival, as the humourless comedian, at the urging of the Boycott, Divestment and Sanctions movement, has decided not to participate.

As I write, the list of withdrawals, 30 at last count, is sure to get longer and longer. At what I imagine would be the the panel discussion from hell, Yumi Stynes, Julia Banks and Louise Milligan were scheduled to bang on about the patriarchy and related themes until Stynes, also in solidarity with Palestine, pulled out. Again, for my readers, this may be the cause of amused cheer rather than annoyance.

That said, there is much in this campaign that we should find bothersome: the rebarbative manner in which it has been conducted, the pathetic non-effort by some in the media to question its claims, and what it all may foretoken for the cultural life of the country.

To recap: it came to light that Israel is among the financial supporters of the Sydney Festival, as the Israeli embassy in Australia contributed $20 000 to the staging of Decadence, a production by Israeli choreographer Ohad Naharin and the Sydney Dance Company. As expected, the news of this funding led to an outbreak of the customary insanity among left-wing academics and activists.

At this point, some readers may have a touch of déjà vu. At the end of last year, as you may recall from an earlier essay I wrote, the Melbourne Queer Film Festival found itself in a similar quandary. The MQFF, for daring to include an Israeli film in its program, had to fight off a boycott as well as the risible claim that it was “complicit in torture”. That campaign, I can happily remind you, was a failure, and the activists went home disappointed.

The latest boycotters have borrowed that charge sheet from the MQFF and added a few items: the Sydney Festival’s board, the artists still participating, as well as all attendees are now considered supporters of apartheid and genocide. Anti-Israel fanaticism, once a hobby in Australia, has become a full-time profession for many, it would seem.

On the sidelines, some of the noisiest cheerleaders for the boycott have been activist academic Randa Abdel-Fattah, Senator Mehreen Faruqi, and — wait for it — Hamas. Among these, I must admit, it is hard to determine who verbally attacks Israel with the most ferocity and vim. The terror group — no, I mean Hamas, not Faruqi’s Greens — has just sent both warm regards and “solidarity” to its co-thinkers in Sydney.

I wonder, though, if this partnership will cause any embarrassment or second thoughts among the activists here. One reason I’m doubtful is that much of the media can hardly be relied upon to ask anyone about it, or ask anything mildly interrogative at all, for that matter.

Take, for example, another accusation that has been flung around: that the Sydney Festival is now a dangerous place. Abdel-Fattah, writing in Meanjin with some other academic agitators, set out the lame talking points that every other whiny activist would put to use: the festival, because of all this bother with Israel, has become “a culturally unsafe environment for Arab artists and audiences.”

What the hell does that mean? No explanations have been offered and to the further shame of the professionally incurious Australian press corps, no journalists have thought it necessary to ask for one.

The danger, apparently, is also physical, as well as a threat to all attendees. Fahad Ali of Palestine Justice Movement Sydney has appeared frequently on ABC television and the digital news site, where he sniffs:

We told them that by accepting this sponsorship, they created an unsafe environment for Palestinian artists taking part in the festival and for audiences more broadly.

Where is the professional curiosity here? Sure, my own preference is for a public campaign of ridicule directed at the likes of Abdel-Fattah and Ali, but I’d settle for just a few follow-up questions to these nonsense claims. How, exactly, does the performance of — and this really needs to be reiterated — an Israeli choreographer’s dance routine contribute to a dangerous environment? For that matter, how does all this virtue-signalling advance the cause of Palestinian rights? Further, how  does this boycott, after almost two years of cancelled cultural events, serve those of a lower profile in the Australian artistic community, those who would like to get paid? There may be more than a bit of journalistic sympathy for the boycotting crusaders, I suspect, so it’s hardly surprising that no one gets a tough question.

At first, I admit, I enjoyed the spectacle of the Left beating itself up. After all, there is even quite a bit of online contempt for unbudging and uncharacteristically quiet board member Benjamin Law, whose left-wing credentials are now up for review. I have also been pleased to see the Sydney Festival hold its ground and refuse to send back the embassy’s cheque. Score one against the Cancel Culture enthusiasts, I’d like to say. One policy, which could be very good for the country, is Israel’s sponsoring of any and all cultural festivals in Australia; let the cretinous BDS supporters out themselves and then stay home, as they won’t have an event that will take them.

Of course, there is another possible outcome to all this, and the savagery and longevity of this current campaign could very well make it the likelier one: many event organisers will become more fearful of provoking the online mob and will take fewer risks with their invitees and programming. If it goes uncontested, loose talk of a lack of ‘cultural safety’ could be applied to, well, anything: conservatives on the speaking schedule, a panelist who believes in the dangerous reality of biological sex, or perhaps even rumours of an Israeli in attendance, existing.

A tentative cheer, then, for the Sydney Festival. Let’s hope its progressive critics, already accustomed to so much disappointment, find themselves sulking yet again.

Portrait of the Artist as a Young Grant Snaffler

Leigh Sales and her Hopeless Hackery