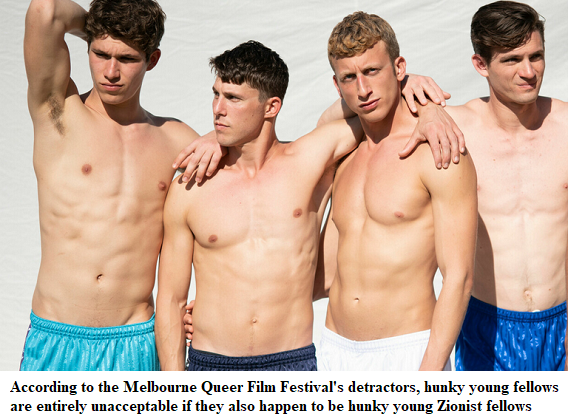 The Melbourne Queer Film Festival (MQFF), I suspect, is not an event to which many Quadrant readers will have rushed to secure tickets. This fixture on the LGBT-etc calendar, squeezed in between Carols by Queerlight (self-explanatory) and Southern HiBearnation (no, Google ‘bear’ for yourselves) offers attendees two weeks of cinematic merry-making, or so I’d been led to believe. The theme of this year’s event, I’m sorry to report, is frequent sniping and a decided lack of chirpiness, and I see little prospect of renewed cheer occurring before closing night.

The trouble began with the inclusion in the lineup of Adam Kalderon’s film The Swimmer, a story about a gay Olympics prospect, the institutional discrimination he faces and his struggle for self-acceptance. Topical and important issues, the reviewers would say. The film also features, I have been reliably informed, lingering close-ups of strapping young fellows in Speedos. For many viewers, that all sounds like a jolly night at the cinema, so one could be excused for wondering what all the bloody fuss is about.

Well, The Swimmer, you see, is an Israeli production, and it turns out that screening such a film is something of a festival faux pas. As soon as the incriminating schedule arrived in the inbox, there was a good deal of inquiry as to why MQFF had failed to adopt the expected policy of anti-Israel fanaticism. A vigorous social media campaign soon got underway, urging MQFF to drop the film, apologise for all the bruised feelings, and commit to being a better ally in the future. 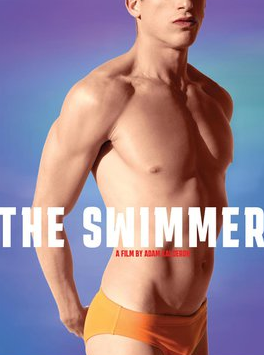 This noisy reaction is due to the fact that some portion of the festival’s supporters also happen to be enlistees in Boycott, Divestment and Sanctions (BDS), a movement which seeks to extirpate all traces of Israel’s business, cultural and general dealings with the rest of the world. One of the many accusations they bung around is pinkwashing, a term which calls for a bit of elucidation.

Unlike Iran or Nigeria, where authorities punish homosexuals by hanging or stoning, Israel is welcoming and tolerant of all, a fact which has caused a lot of grumpiness on the contemporary Left. For its critics, Israel’s celebration of its LGBT community through film and other means is a slick but sinister marketing trick: under the cover of social progressivism, Israel hides its violent apartheid and genocide and, well, you know the rest of the chargesheet by now.

Such a worldview fired up the protestors of The Swimmer, as they denounced a film that none of them had seen and waited for MQFF to capitulate. I can happily report that they didn’t have to wait long for an answer: MQFF’s statement didn’t quite tell everyone to stick those complaints up their fundament, but it was somewhat implied.

The organisation made a number of cogent points: the majority of the festival’s films receives government funding, so it’s silly to single out Israel for criticism on this basis; The Swimmer has bugger all to do with the Israel-Palestine conflict, so quit bringing it up; and MQFF’s commitment to diversity means a serious commitment to showing content that not everyone will like, so ha ha ha to the lot of you. Alright, I may have embellished the subtext a little, but the meaning was clear to all.

Unfortunately, none of this led to an outbreak of common sense, and the criticism of MQFF became, I think you’ll agree, a bit hyperbolic. There was loose talk of MQFF’s being “complicit in torture” as well as assertions that hosting cinemas had become dangerous spaces for Melbourne’s queer Palestinian community.

The drama then heightened with some high-profile resignations. Co-president Molly Whelan was the first to go, and in her statement she added to the bill of complaint the usual stuff about the cisheteropatriarchy and whatnot. Nayuka Gorrie, the arson enthusiast featured on ABC’s Q&A, followed her out the door, saying she felt “sick and sad” about the whole rotten business. Alongside her blather about settler colonialism, she reminded MQFF it was not too late to cancel the film and end up — where else? — on the right side of history.

Nevertheless, MQFF held its ground and the screening of The Swimmer got underway. The aforementioned queer Palestinian community, channeling just a touch of the zeal for which Hamas is known, turned up in protest at the Jam Factory, waving banners and chanting that ditty about Palestine being free, you know, from the river to the sea. These scenes, which were a bit predictable, involved the authorities turning up and dispersing the crowd. The complainants, many of whom naturally favour police abolition, found this final act especially dispiriting.

Yes, I know: it’s amusing to watch the Left beat itself up. When you’re watching a display like this, it’s tempting simply to tuck into the popcorn and enjoy the show.

On that note, perhaps some good can be rescued from the kerfuffle. All that banging on about the value of inclusiveness and diversity and dialogue looks risible and insincere now, doesn’t it? It would be nice if more people were to realise that, especially those on the left, the ones who have to watch their every word. We mustn’t get our hopes up too much, but this event may even foretoken the crackup of the identitarian movements scattering terror and desolation everywhere they go, so that’s a cheering thought.

Although they may shudder to hear it from from Quadrant, I think we should offer three hearty cheers for the Melbourne Queer Film Festival. The words ‘cancel culture’ get flung around too often nowadays, but this affair should strike all sensible people as a clear demonstration of the concept in action. It also highlights how much attempted cancelling goes on within left-wing political coalitions, as opposed to struggles against the traditional enemy i.e. chaps like me. For what it’s worth, I dislike cancel culture on both the left and the right, so I’m very pleased to see MQFF showing some spine.

On that bright note, perhaps everyone can learn an old lesson. There was a time, you may recall, when people registered their objection to a film via the radical notion of grumpily choosing not to see it, and then staying home. Doesn’t that sound refreshing and wonderful?

Timothy Cootes is a regular contributor. This article was published at MercatorNet