The return of the Wall Street franchise and Gordon Gekko is a movie to be seen only to understand how little people like the Hollywood left (or for that matter the left in general) understand markets.

I like a film with drama and am generally happy to suspend disbelief even in a bad cause. But to make Wall Street traders appear as a bunch of sentimental rubes is carrying dorkiness too far. 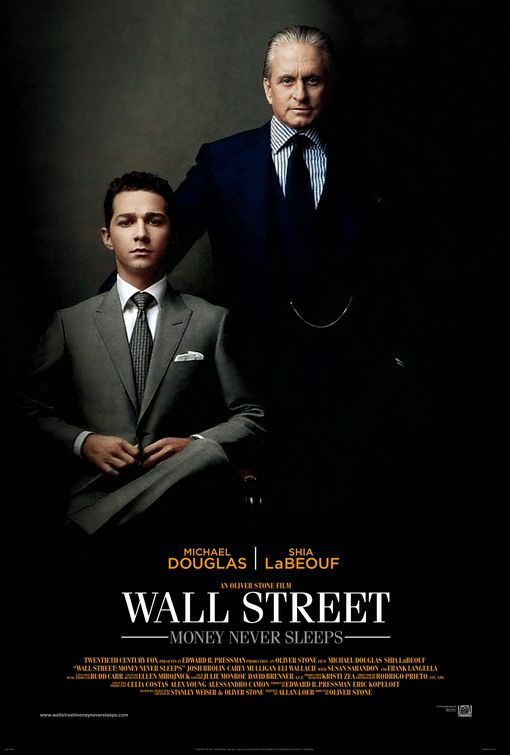 In Wall Street: Money Never Sleeps, Gordon Gekko (aka Michael Douglas) is now out of jail and is a financial guru who can see the GFC coming a mile off. Nothing like building 20-20 hindsight into a movie; that way anybody can be a genius. His soon-to-be son-in-law (Shia LaBoeuf) is a trader and analyst whose passion is green growth. Although having no relevant knowledge of any kind, he is obsessed with trying to divert tens of millions of investor funds into some green electricity project based on fusion technology. His love interest – Gekko’s estranged daughter – runs a leftwing blog.

And while the story revolves around the great meltdown of 2008, what you will learn about the Global Financial Crisis is zero. You leave the film with whatever beliefs you came with to the cinema. Even as anti-capitalist propaganda, it was very low grade, but that was not for trying.

There are many moments in the film that put me off but I pick one early on with no effect on the plot line so that you can still see the film for yourself. Picture this young Wall Street trader in some up-market expense-accounts-only nightclub. Wine, women and song aplenty. The point was, I think: look at these financial nobodies able to command such disgustingly large salaries and get to go to such places of such wild expense. What could they possibly do to deserve it? OK. Fair question.

But up on the screen all that was really there to see were a bunch of actors, actors who themselves frequent just such places and command salaries likely to be as high if not higher than a Wall Street trader. Who are these millionaire actors and multi-millionaire producers to try to create a politics of envy. Why should actors be entitled to such money and a Wall Street trader not? For me it is just how the market works so I sleep nights without trying to overthrow the system. For others, it must be torture to see others doing so well when they are not.

The reality is that the people who made this film seem to have little idea about what money market people do for a living, and why it matters to them and to us that they are good at their job. And oddly, there actually was a moment that dealt with such matters where a scene is set in a meeting to decide where to place a quite substantial amount of capital.

Although you would not know it from the film, and often you don’t even get that impression from real life, the aim of the financial institutions portrayed in the film is to lend money to people who will pay it back with interest. Picking and choosing amongst borrowers is a skill of the highest order. For every dollar of savings there are far more than a dollar’s worth of borrowers who would gladly take those funds. Getting money into the hands of those who can actually do something value adding with the money and then repay their debts is the essential skill of financial institutions.

The film’s main fault was being incoherent and dull. I could not even tell at the end whether or not greed is good, bad or it depends. I have seldom wished to see a movie come to an end as much as I did this one.

Which Part of Me is Aboriginal?